John Thornley, OBE was one of the founders of the MG Car Club and served as its first Secretary. Later, he went on to become Director and General Manager of the MG Car Company. John Thornley will be inducted into the British Sports Car Hall of Fame in ceremonies on June 2, 2017.

John Thornley’s first MG was an M-Type he bought in 1930, and soon after he met with two other enthusiasts and formed the MG Car Club. John went to Abingdon and managed to get Cecil Kimber to authorize the MG logo for the club’s badge. He was at this time an accountant in London, but he then persuaded Kimber to give him an office at the MG Factory to run the fledgling MGCC and he moved to Abingdon. However, another part of the job at MG was as assistant to the service manager, John Temple, who was shortly afterward appointed competitions manager, and John thus inherited the Service Manager’s position.

Serving in the army during the war, Thornley attained the rank of Lt. Colonel and returned to Abingdon in 1945, where he became Sales and Service Manager for MG. He was involved deeply in all aspects of the competition and record-breaking efforts of the Octagon. In 1952 he was appointed General Manager. MG was now headed by a no-nonsense enthusiast who battled against the corporate hierarchy of BMC and later BL. He handpicked his staff and jollied them along with his sense of humor into vast achievements which no other small auto factory could ever have dreamed of. 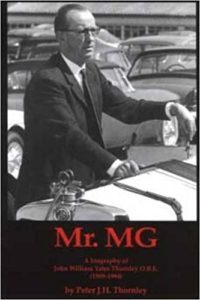 Thornely envisaged the MGB and saw into production the MGB GT, the “poor man’s E-Type” as he put it, and many other MG successes achieved against the odds. He remained convinced to the end that the Triumph “suits” who gained control of BLMC were responsible for the ultimate demise of the MG in 1980. During his tenure as head of the company, the MG Factory became the world’s largest producer of sports cars. Even when in retirement, Thornely still retained a great interest in MG and he was outraged at the decision to close the MG factory and personally wrote to MG dealers around the world to request their support to protest the closure.

John Thornley’s book Maintaining The Breed: The Saga of MG Racing Cars is out of print, but you can still easily obtained used copies on Amazon and eBay. The book focuses primarily on the competition history of MG but also relates how those competition developments fed back into the production cars. There is also a biography of Thornley, written by his son Peter Thornley, titled simply Mr. MG.

Below is a short video from the MG Cars Channel featuring a short interview with Thornley where he talks about his book and his days at MG.

I would like to the MG Car Channel for the video and Moss Motoring for the bulk of this biography.

This is part of an ongoing series focusing on the 23 individuals who will be inducted into the British Sports Car Hall of Fame in ceremonies on June 2nd, 2017, at the Hall of Fame in Petersburg, VA.

Now You Can Drink MG Tea with Your Classic MG

November 16, 2016 Staff Highlights, MG, People Comments Off on Now You Can Drink MG Tea with Your Classic MG

MG Car Club in Abingdon has brought out its very own breakfast blend tea in time for Christmas, sporting an image of the town’s old MG factory where generations of Oxfordshire families once worked.   General manager Adam Sloman said: “We want to offer MG fans something different through our merchandise range and we thought what better than a proper cuppa, blended just up the road from Abingdon. “The tea tastes fantastic. It’s something special and unique, it’s fun and will make a brilliant gift too.” Staff