The British Motor Corporation’s (BMC) 1100 and 1300 model range was amongst the most successful in the Corporation’s history, selling more than 2.1 million of all types between its introduction in 1962 and its demise in 1974. Worldwide, the BMC 1100 was sold under eight different marque names and in two-door saloon, four-door saloon, two-door estate, and five-door hatchback forms – and very nearly as a van as well. In Britain, it was the country’s best-selling car between 1962 and 1971, being beaten just once (in 1967) by the Ford Cortina.

The BMC 1100 and 1300: An Enthusiasts Guide by James Taylor looks at the design and development of a model range that at the time confirmed BMC as a pioneer of new automotive ideas and had a profound impact on other manufacturers. It covers not only the full standard model range, but special conversions, cars built abroad, and owning and running the cars today.

The well-written and researched chapters include a development overview, a look at the core models of Austin and Morris, the Estates, the sporting models of MG and Riley, the luxury models of Wolseley and Vanden Plas, and then the variants that were licensed and built overseas. The final chapter in the book contains advice on buying and owning an 1100. This book is very much a guide in that it details the varying  types of cars, their similarities and differences, and the operation of them. There are ample photographs, both color and black & white, to illustrate and add to the narrative. 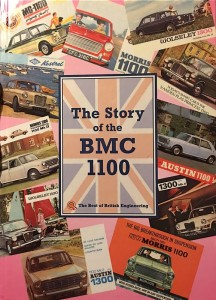 this book and The Story of the BMC 1100 that came out  in 2012, it is nice to see some attention being made to these forgotten cars. The book by book by James Taylor is for more a guide in the traditional sense while No, they may not have the glamor of other British cars such as the Aston Martin or Jaguar, nor the everyman icon status such as the MGB, but these were important top selling cars in their days. And, to those of us who collect them, they are fun and interesting time machines that deserve preserving.

As an added little bonus, here is a clip of Bournemouth in the South of England, from sometime supposedly in the 1980s. There are two reasons this video is relevant to the BMC 1100 discussion. First, just try to count the number of BMC 1100s you see in the clip – driving by, parked alongside the road, or hanging out at the shore.  Second, my own 1100, Catherine the Vanden Plas Princess 1100, was originally delivered to Bournemouth and spent her entire life there until being transferred to the USA. So, this is her original home. It is very possible that she is either in this video somewhere, as there is at least one VDP 1100 shown, or parked just out of site on a side street or car park.

Most folks who own a television set are familiar with Dennis Gage and his show My Cassic Car. Well, our video this week is from a show he shot at the McPherson College C.A.R.S. Club show. It just so happens that two of the cars he featured in this episode are a 1967 MG 1100 and a 1964 Indy car racer featuring MG 1100 liquid suspension. The cars belong to Richard Morrison who has painstakingly restored them both. The footage of these cars starts at 5:40. For the 1964 Indianapolis 500 Kjell Qvale, who imported and distributed several British Marques, asked the head of his racing department, Joe Huffaker, to build 3 cars incorporating the hydrolastic suspension from the MG 1100 Sports Sedan. The cars raced at Indy as the MG Liquid Suspension Specials in 1964 and 1965. A. J. Foyt […]

Let’s get bumpy this week!  Our Video of the Week this time is going to be a Morris 1100 television commercial from New Zealand featuring the car’s hydrolastic suspension. Made for the New Zealand British Motor Corporation (BMC) distributor Dominion Motors. If you don’t know, hydrolastic suspension was used on early Minis and the full line of BMC 1100 / 1300 cars, collectively known by their factory designation of ADO16. The ADO16s include the MG 1100, Austin America, Morris 1100, Vanden Plas Princess 1100, Riley Kestrel, and many more. At this point, BMC was huge into badge engineering. Hydrolastic suspension cars, at least in this form, use liquid-filled dampers at each of the four wheels instead of shocks and springs. Those dampers, which are basically large heavy rubber bladders, are connected front-to-back by hoses. This means that when the front left […]

Our Video-of-the-Week for you this second week of January is about one of my all-time favorite cars, the MG 1100. The video comes by way of Shelburne Films and their MG Cars Channel. […]