Aston Martin will enter its factory LMP1 team in this year’s Le Mans 24 Hours and next month’s Sebring 12 Hours. 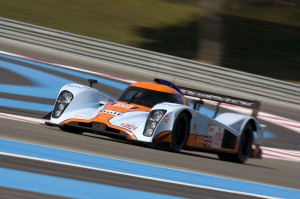 The British manufacturer had been expected to sit out the 2010 season while developing a new car for 2011, but will now take two LMP1 cars to Le Mans and one car to the American Le Mans Series opener at Sebring, the next round at Long Beach and the LMS season opener at Paul Ricard in April.

Autosport Magazine revealed last week that Mexican driver Adrian Fernandez was working on a deal to race an Aston in the ALMS, and the former Champ Car racer and reigning ALMS LMP2 champion will join the team’s line-up for the program.

Stefan Mucke, Darren Turner, Harold Primat and Chris Buncombe have all been retained, with Aston Martin Racing due to announce a sixth driver in the coming weeks. The team is also set to enter selected races this season after Le Mans, but the details are still to be confirmed.

“We are looking forward to a great season of racing and we hope to have another strong showing at Le Mans,” said team boss George Howard-Chappell. “I’d like to welcome Adrian to the team, I’m sure with his experience he will be a great addition to our driver line-up.”

Aston Martin will also have an increased GT program in 2010, supporting two teams in the GT1 World Championship and one in the FIA GT2 series. Works drivers Mucke, Turner and Tomas Enge racing in the new GT1 series.

Aston Martin has unveiled its new Virage coupé set to be launched at the Geneva Motor Show. The British luxury sports car manufacturer said that the new car, which combines performance with luxury, comfort and refinement, sits between the more basic DB9 and the sporty DBS in the line-up. The model, powered by a 6.0 litre V12 engine in 490bhp trim, features rear-wheel drive through a carbon fibre prop shaft and a six-speed Touchtronic II automatic gearbox. It offers Carbon Ceramic Matrix (CCM) brakes as standard, and comes equipped with features including an improved Adaptive Damping System (ADS) to provide efficient road holding in different conditions. The ADS system chooses from five different stiffness settings within normal mode, and from a further five stiffer settings within sport mode. The sport mode allows drivers to select a sharper throttle response and […]

Despite its unprecedented success and staggering popularity the world over, Apple’s iPhone is no longer Britain’s coolest brand, having been knocked off the top spot of the ‘Cool Brands index’ by Aston Martin. The influential survey is made up of 2,000 consumers and a panel of 35 designers, style magazine editors, and website executives, who have deemed Aston Martin vehicles as Britain’s most desirable product — pushing the iPhone into second place. The desire to own an Aston Martin vehicle is believed to have been fueled by James Bond, who can be seen driving a whole host of the company’s vehicles in the films. Despite being nearly 100 years old, the car manufacturer still maintains its appeal, according to the survey, while cutting edge technology — such as the iPhone — struggles to keep up. For the full story, read […]

Aston Martin stunned the world last June by revealing the Cygnet super-mini concept that is based on the Toyota iQ. Then the British sports car maker that is fondly associated with mouth watering sports cars announced that the Cygnet will go into production and that the development of the super-mini will continue into 2010. Slated for a market launch late this year or by early 2011, the Cygnet is expected to be sold to owners of Aston Martin’s full-sized sports cars and only 2,000 units are planned. Staff