WH Brand, a family-run MG dealership in Lincolnshire threw a party for more than 250 guests at its premises in the village of Whaplode Drove, near Spalding. They held the event to celebrate being named the top-performing MG dealer of 2014 as well as being the top-selling MG3 dealer. In addition, the company was marking 90 years in business. 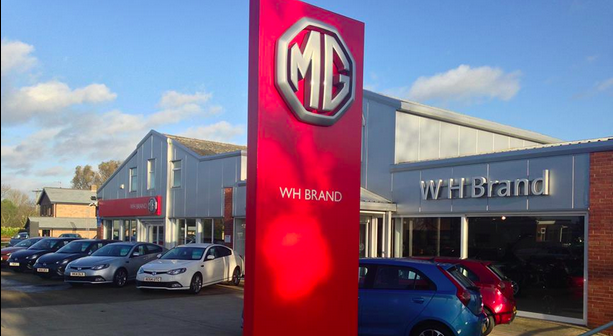 The celebrations coincided with the 90th birthday of Fred Brand, the son of the firm’s founder, William Horace Brand. Fred showed off a classic 1949 speedway bike – he took up the sport to earn money to build a new garage for the business.

While customers tucked into a fish and chip supper on a London double-decker bus parked outside the showrooms, sales manager Adam Brand – great grandson of the firm’s founder – enjoyed a bit of business success.

He said: ‘I was chatting away to a customer I’ve known for years and before you knew it, I had an order for an MG6 Magnette.

‘Ten minutes later, someone ordered an MG3 and following the event, someone else rang up and ordered another MG3. I didn’t really sell the cars – they sold themselves! Taking on the MG franchise was the best business decision we have ever made.

‘We seem to have been celebrating for weeks on end, but we’re not complaining.’

During the celebrations, WH Brand’s customers and suppliers raised nearly £500 for the Lincs and Notts Air Ambulance.

WH Brand joined the MG dealer network in December 2013. In the last 12 months the number of MG dealers has almost doubled. There are currently 56 MG dealerships and 10 aftersales outlets across the country. More dealers will be appointed in the coming months.

Editor at Just British
Michael Carnell is the editor and founder of the Just British Online Motoring Magazine. As a lifelong British car enthusiast, he has owned or driven British cars of all ages from Austins and MGs to Jaguars and Triumphs. He currently owns a 1966 Vanden Plas Princess 1100 and a 1977 MGB. But there is always room for more - no matter what his wife says.

Rolls-Royce Motor Cars has achieved the highest annual sales in the marque’s 115-year history, with 4,107 cars delivered to customers in over 50 countries around the world in 2018, and continues to generate a positive contribution to its shareholder, the BMW Group. In a year of multiple records, the world’s foremost Luxury House also enjoyed unprecedented demand for its Bespoke creations and launched the new Cullinan – the Rolls-Royce of SUVs – to great international acclaim. Reflecting on the company’s performance for the year, Torsten Müller-Ötvös, CEO, Rolls-Royce Motor Cars, said: 2018 was a most successful, record-breaking year for Rolls-Royce. We have seen growth in all our regions around the world. At Rolls-Royce we are deeply focused on each and every one of our customers and are delivering on their demanding expectations. The Home of Rolls-Royce at Goodwood is acknowledged and […]

Morgan Had Record Year for Profits in 2018

Morgan Motor Company announced record profits as it prepares to launch a range of vehicles in its 110th year. The iconic Malvern-based family-owned firm, which employs 204 staff, said profits jumped to £3.6million last year from £2million 12 months earlier. Output dropped from 750 to 681 cars as the firm said goodbye to the thirsty V8 engine and the Aero 8 and Plus 8 models which use it. Morgan is expected to launch a more frugal but sportier replacement at this spring’s Geneva Motor Show.  Staff

MG Motor UK has already beaten 2017’s new car annual registrations volume, reaching over 4,441 registrations by the 4th July and remaining on course to double its sales volumes in 2018. MG’s significant volume growth is being driven by the fabulous All-New MG ZS compact SUV, which starts from £12,495 OTR and includes a 7-year manufacturer warranty. The MG ZS comes with a high-level of specification as standard, and is also available on a 5-year 0% APR finance deal, making it one of the best value-for-money cars in the UK market today. Staff