Sir William Lyons was the founder, director, chairman and guiding force of Jaguar. That seems like such a short and simple sentence to convey the importance of the man known as “Mister Jaguar”. For over 40 years Lyons led the car company through its many iterations and shaped both the cars and the culture through personal determination. For those many years, Lyons simply was Jaguar. He will be inducted into the British Sports Car Hall of Fame in just over two weeks.

A difficult man to get along with and work for, Lyons was responsible for styling many of the cars that would bear the Jaguar name and his talent for selecting – and retaining for long periods – quality personnel speaks to the real measure of the man.

Sir William Lyons was born in Blackpool in 1901. A bright boy, he was curious about machinery and good at school work. His family secured for him an engineering apprenticeship at Crossley Motors where he developed an intense interest in the burgeoning automotive industry. In 1919, he left his apprenticeship to work for a Sunbeam dealer in his hometown and met William Walmsley two years later. The industrious Walmsley had been adapting surplus military surplus motorcycles for civilian use and manufacturing sidecars to use with them. The two became friends and decided to go into business together and obtained from their fathers the necessary funding to start their company.

As soon as Lyons reached legal age – 21 years old – he formed the Swallow Sidecar Company with Walmsley and was staffed by three men and a boy. The sidecars were well made and sold in sufficient numbers to keep the company afloat but the firm decided to place greater focus on producing automobiles as the 20s progressed. Having outgrown several manufacturing plants, the company relocated to Coventry and increased car production to 50 units per week. 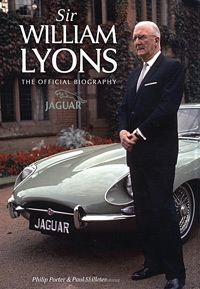 In 1931, the legendary SS line was established (SS = Swallow Sidecar) and the company changed its name to SS Cars Limited two years later. The first Jaguar reached the market in 1935 and during the war, the firm focused on aviation work and other military contracts. When the war ended, Lyons changed the company name to Jaguar to avoid any mental connections with Hitler’s SS and the company developed the legendary XK engine in 1948 that would power Jaguar’s into the 90s.

In 1956, Lyons was knighted for his services to British industry and for the fine export performance of the company. In 1966, faced with a strengthening global industry, he merged Jaguar with the British Motor Corporation (BMC) to form British Motor Holdings, which was later absorbed into British Leyland.

Unfortunately, the final years of Lyons tenure before he retired as managing director near the end of 1967 while remaining on as chairman, were a constant struggle against impossible odds to retain the identity and independence of his company, not least its engineering department.

He retired completely to Wappenbury Hall in 1972, to play golf, travel, garden, and keep prize-winning Suffolk sheep and Jersey cattle on his farm estates at Wappenbury. His health declined fairly rapidly in retirement and the reemergence of his company under John Egan took place after his death. Lyons died in 1985 near Leamington Spa in Warwickshire. He was 83 years old.

Portions of this article and the pictures came via Moss Motoring. You can read a further article on Lyons at the Jag-Lovers.org.

This is part of an ongoing series focusing on the 23 individuals who will be inducted into the British Sports Car Hall of Fame in ceremonies on June 2nd, 2017, at the Hall of Fame in Petersburg, VA.

In this short video, Ian Callum, Design Director of Jaguar UK, discusses the birth of the design elements in the new E-PACE. From the cub-like large paws and eyes to the camera inspired tactile dials, the car is designed for its enjoyable aesthetic appeal. There are even racing chicane inspired flourishes captured in the dash and taillights. Design creates order out of chaos. But chaos is often required to simply be creative. — Ian Callum, Jaguar Cars Design Director The Jaguar E-PACE is a compact sport utility vehicle (compact SUV) that was officially revealed on 13 July 2017. In a break from tradition, the car is to be built in Graz, Austria, by Magna Steyr and by Chery Jaguar Land Rover, JLR’s joint venture with partner Chery in Changshu, China. The E-Pace will be the first of Jaguar’s cars to […]

Bentley Motors today announces the appointment of John Paul Gregory as its new Head of Exterior Design, starting with immediate effect. Having spent more than 8 years with Bentley, Gregory has been promoted from his previous role as Advanced Exterior Design Leader.  Staff