Land Rover’s engineers have worked on the boat’s giant 77ft high wingsail using their understanding of aerodynamics and the computer technology gained on developing cars, including the all-new Discovery. The team has created sophisticated software to explore the detailed and dynamic performance of the wingsail, analysing 80 million computational cells in each test, which will seek definitive results to help further performance gains.

Tony Harper, Director of Research at Jaguar Land Rover, said: “This engineering process is similar to processes we use at Jaguar Land Rover to assess how our vehicles respond at high speeds. Our aim is to minimise the effect of aerodynamic forces that act to deform parts of the vehicle and to make them more fuel efficient.

We have been working extremely closely with the design team at the base in Portsmouth and the America’s Cup race boat, known as R1, which will be ready to launch early next year. The engineers are seeing their hard work pay off and as the Cup will be won on those vital few seconds, we anticipate seeing significant performance gains which we believe will ultimately help the team to win in Bermuda. 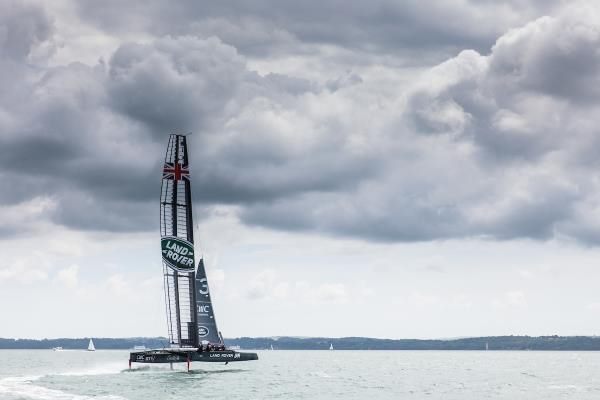 Land Rover’s engineers have developed sophisticated software which analyses the carbon fibre wing to make the boat even faster. It is as important as shaving fractions of a second off the performance of an F1 racing car. This software, called Fluid Structure Interaction (FSI), combines aerodynamic testing approaches to increase the performance of the boat’s wing – the catamaran’s main source of power – with structural analysis of its deformation. This has been created because the carbon fibrewing not only needs to withstand strong winds and be crafted from the lightest structures, but also needs to deform to generate acceleration and speed – not drag.

The FSI system processes data from separate software used to analyse the structure of the wing and the airflow around it. Combining this information is key.

One example is how the Clysar – the film covering the wing – distorts and impacts the boat’s speed due to natural forces. By combining these processes, the team is able to gain a deeper understanding of the interaction between the wing’s aerodynamics and structural dynamics to evaluate the new airflow and changes to the wing shape.

Richard Hopkirk, Engineering Manager at Land Rover BAR, said: “This is complex work in the fine grain of the wing’s performance. We couldn’t have done this work without Land Rover. Their computational sophistication and resource has made a substantial difference to how we have tackled this problem.

“We expect to see real gains out on the water next summer as a result of this work. With the America’s Cup, we could have the best sailors in the world, but it’s just as much about the design of the final boat which will give us the cutting edge next summer.”

Land Rover BAR head to Fukuoka in Japan for the final America’s Cup World Series event on 19-20 November. They are top of the overall leaderboard. The event is crucial in determining their position going into Bermuda next summer.

The America’s Cup race boat, currently known by the code name R1, will be launched in early 2017 in Bermuda, the host of the 35th America’s Cup in May and June 2017.

Heading into the final America’s Cup World Series event, the overall leader-board is:

The British Land Rover BAR Academy team has won the Red Bull Youth America’s Cup (RBYAC) following an intense final day of competition on Bermuda’s Great Sound. As overnight leaders, Land Rover BAR Academy finished with a total of 50 points, 2 points ahead of their nearest rivals from New Zealand and claimed victory in their inaugural RBYAC challenge. The victory came down to the wire, the team had to dig deep and show their determination by not giving up and making it back from 8th to 2nd place in the final race of the day to claim overall victory. Staff

The wait for the 35th America’s Cup is nearly over as Land Rover BAR, led by five-time Olympian Sir Ben Ainslie, prepare to battle in Bermuda for sailing’s ultimate prize. America’s Cup sailing, called ‘F1 on water,’ is faster, more competitive and more technically advanced than ever before. Reaching speeds of 60mph, these boats fly above the surface, pushing the boundaries of aerodynamics, control systems, data analysis and performance in the pursuit of optimum speed and efficiency. Staff

Land Rover will extend its support of Britain’s America’s Cup sailing team by signing a new deal to continue as Title and Exclusive Innovation Partner of Ben Ainslie Racing (BAR) for the 36th America’s Cup. The announcement is a boost for the team, who bowed out of the 35th America’s Cup in Bermuda after a courageous battle with Emirates Team New Zealand in the play-off stages. Land Rover BAR’s exit ends a successful inaugural campaign for one of the newest challenger in the competition. They finished at the top of the America’s Cup World Series and came third in the qualifiers. Staff