Building in Britain is not essential to BMW’s Mini brand as most customers do not know where the compact cars are built and its new electric model could be made elsewhere, the brand’s boss told Reuters on Tuesday. 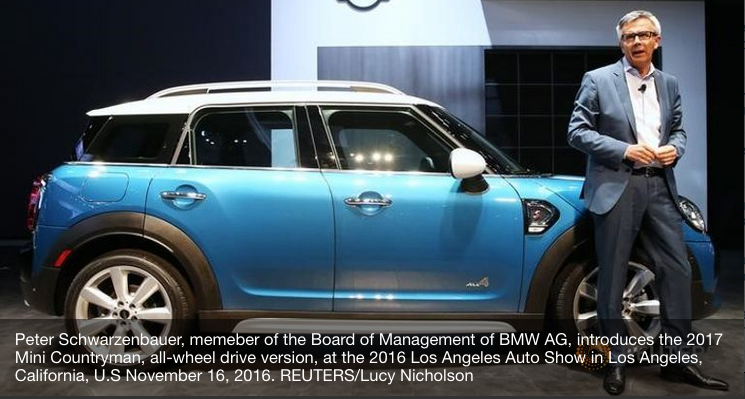 Peter Schwarzenbauer said the German carmaker would decide by the end of 2017 whether to build the new electric model at an existing site in Britain or the Netherlands, or whether to pick a new location.

The BMW board member said the possibility of post-Brexit tariffs was “only one point … when you have to decide where to produce a car” and the first question was where the model would be primarily sold.

But asked whether it really mattered to British or foreign buyers that the Mini, sometimes sold with the image of the union flag on the roof, is made in Britain, Schwarzenbauer said:

No. The brand being perceived as British, that’s important but this does not mean necessarily that you have to produce it (in Britain).

Most people don’t know where the cars are produced.

Mini makes around 70 percent of its 360,000 cars at its southern English Oxford plant but there are concerns that uncertainty over Britain’s future trading relationship with the EU could hurt the UK car industry, reliant on tariff-free trade.

Prime Minister Theresa May has said Britain will leave the EU’s single market and could also exit the customs union but she would seek to maintain the best possible access to the EU, the British car sector’s biggest export market.

First Jaguar, now MINI. Brexit is already playing havoc with the business of making cars in the United Kingdom and striking fear into global automakers. BMW said Tuesday that it would shut its MINI factory in England for one month of maintenance immediately after Brexit because it can’t be sure of getting the parts it needs if the United Kingdom leaves the European Union without a trade deal. Brexit will take effect on March 29. The MINI shutdown will begin on April 1. “While we believe this worst-case scenario is an unlikely outcome, we have to plan for it,” said BMW, which employs 4,200 workers at its MINI plant in Oxford. Staff

Prof. Dr. Ralf Speth, Chief Executive Officer of Jaguar Land Rover Automotive plc, Britain’s largest vehicle manufacturer, has called on the UK Government to urgently provide post-Brexit certainty for business including guaranteed tariff-free access and frictionless trade with the European Union. Ahead of the publication of a White Paper outlining the Government’s proposed post-Brexit trading relationship with the EU, Dr. Speth said: Jaguar Land Rover’s heart and soul is in the UK. However we, and our partners in the supply chain, face an unpredictable future if the Brexit negotiations do not maintain free and frictionless trade with the EU and unrestricted access to the single market. We urgently need greater certainty to continue to invest heavily in the UK and safeguard our suppliers, customers and 40,000 British-based employees. A bad Brexit deal would cost Jaguar Land Rover more than £1.2bn […]