That there was a pent-up demand for a replacement MK1 Mini bodyshell was not in doubt, but British Motor Heritage (BMH) has nevertheless been stunned at the scale of orders since first displaying its prototype shell at the 2016 NEC Classic Motor Show.

Dramatically rising values are at the heart of the demand

A few years back, though values of good Mini-Coopers were climbing steadily, the limited worth of their 850 cousins made comprehensive restorations hard to justify. The picture is now very different, and enthusiasts are busy rejuvenating all versions of Issisgonis’ immortal baby at an ever-increasing rate. As a result we are constantly having to raise our production targets, and that’s without taking into account the shells we are creating for David Brown Automotive’s impressive Mini Remastered programme.

At just £9,950 inc. VAT, the cost of an all-new bodyshell crafted on original British Leyland tooling is proving to be a popular solution for more and more people restoring these coveted cars – some of which are, of course, fast approaching 60 years of age.

BMH has been successfully running a Heritage-shelled MGB in historic racing for 12 years – arguably the ultimate test for what is one of the company’s key products. For this year it, and the team’s Farina A40, are being joined by an FIA specification MK1 Mini-Cooper S. In common with the MGB, it has been constructed around a Heritage replacement shell. Another notable feature of this pocket rocket is its roll cage – a superbly crafted item courtesy of Endaf Owen of Owen Developments.

We are very much looking forward to running the Mini in the heat of competition and, depending on the success of the venture, may build a limited number of equivalent competition specification shells for general sale sometime in the future.

MK1 prototype bodyshell dedicated to the revival of its progenitor

Another MK1 Mini under construction at BMH’s Oxfordshire headquarters is the rebuild of ‘OYO 747F’, the long-suffering 1967 Mini-Cooper S that was butchered to provide the master references for the aforementioned prototype MK1 replacement bodyshell. It is therefore fitting that the very same shell is the one now being employed for the original car’s resurrection – a task that’s been entrusted to renowned classic Mini gurus Somerford Mini. 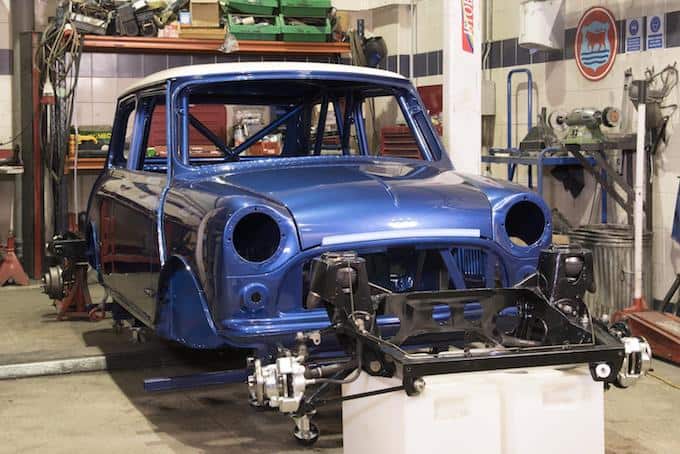 The British Motor Museum has just redesigned their online shop to make it easier to buy Heritage Certificates.  These certificates are available for many of the leading British motor manufacturers including Austin, Morris, MG, Riley, Wolseley, Aston Martin, Rover, Land Rover, Standard, Triumph, BMC and British Leyland. The certificates are basically birth certificates for you car and pull from the original manufacturer’s records and will include details like the build and despatch dates, engine and body numbers, color scheme, and details of factory fitted equipment. Not all particulars are available for every car – much of this depends on the records kept by the original facility and the maintenance of those records over time by different companies. To celebrate the redesign of the museum’s e-shop, they are offering classic car owners a special deal this summer. From now until July 17, 2017 you […]

‘Racing improves the breed’ is an overused and often abused saying, but is totally apt when it comes to a number of products offered by British Motor Heritage (BMH). So, in addition the company’s long-established range of original specification replacement bodyshells and panels, a host of specialist items is also now offered by this versatile supplier, including: Competition parts for the MGB BMH’s managing director John Yea has now been successfully campaigning the company’s FIA specification MGB in a variety of high-profile historic race series for some nine years. His first-hand experience of ‘Britain’s favourite sportscar’ on the track has directly resulted in the following being made available from BMH: 4.1:1 crown wheel and pinion Close ratio gear set for ‘4-synchro’ transmissions Alloy door and boot-lid skins FIA specification alloy front valance Seam-welded replacement bodyshells Bespoke bodyshells featuring full-range of […]

Following a hugely successful Mille Miglia in 2015, Jaguar Heritage has released a film of this year’s rally, giving viewers an in-depth look at an event once described as ‘The most beautiful race in the world’. In the year that Jaguar celebrates its 80th anniversary, the official Jaguar Heritage team headed to the start in Brescia with three C-types, three D-types, two XK120s and an XK140 driven by famous faces from the world of motorsport, TV and music. Following the Jaguar Heritage cavalcade were a group of media guests driving various examples of new Jaguar XE and latest generation of F-TYPE sports cars. Supported by an expert crew of Jaguar Heritage technicians, the nine Jaguar entries ran smoothly throughout the gruelling four-day event. Driven by the likes of supermodel David Gandy, model and TV presenter Jodie Kidd, and musician Elliot […]