Land Rover has unveiled its first luxury compact convertible SUV along the iconic coastline of Los Angeles in Santa Monica, CA. SPECTRE actress Naomie Harris was one of the first to view the newest member of the Range Rover family, as it was revealed for the first time ahead of the Los Angeles Auto Show.

Following the recent global release of SPECTRE, the 24th James Bond adventure, which features vehicles produced by the Jaguar Land Rover Special Operations division, Harris joined the brand to receive an exclusive first look at the new Range Rover Evoque Convertible as it debuted in the US.

Harris, who in her role as Moneypenny has been paired with Land Rover vehicles including the iconic Defender (Skyfall) and more recently the Discovery Sport (SPECTRE) said

“I was so impressed by the design of this car; it’s like nothing I’ve seen on the road before and is so sleek! I love the fact that it is just as much at home driving down the Pacific Coast Highway in LA, as it is off-road in the British Countryside”.

In celebration of the world debut of the Range Rover Evoque Convertible, full-size wireframe sculptures of the newest Range Rover model will be on display in West Hollywood at Le Zinque from Nov 16-17 and on the Santa Monica Pier from Nov 18-20.

More than 450,000 Range Rover Evoques have been produced globally since its introduction in 2011 making the premium compact SUV the fastest-selling Land Rover of all time. This sales success has been accompanied by critical acclaim, as the Range Rover Evoque has also won more than 165 international awards since launch. 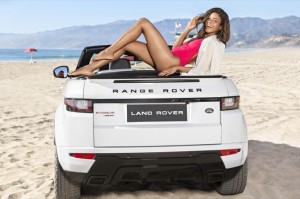 The new Range Rover Evoque Convertible will go on sale from Spring 2016.  Pricing in the UK will start from £47,500 OTR based on a TD4 HSE Dynamic derivative. For more information visit landrover.com.

The iconic Range Rover celebrates its 45th birthday today. Reaching the important milestone is the latest in a series of 2015 highlights for the world’s most desirable luxury SUV. At the New York International Auto Show in March, Land Rover revealed a new Range Rover flagship in the form of the exclusive SVAutobiography and the landmark six millionth Land Rover was a Range Rover Vogue SE, which rolled off the Solihull production line in April. Over the last 45 years Range Rover has delivered a series of industry firsts as it has evolved into the peerless SUV we know today. As well as introducing a host of advanced technologies, many of which have since become industry standards, the original Classic model was cited as an ‘exemplary work of industrial design’ when it became the first vehicle to be displayed at […]

Aston Martin Belfast’s new facility opened its doors last night as customers enjoyed a celebratory reception to mark the occasion and were treated to an exclusive display. The dealership, which continues to be operated by long-term partner Charles Hurst, benefits from a £1m development and signals the group’s commitment to the luxury British brand. Opened officially by Marcus Blake, Aston Martin Regional Director, UK, the new dealership benefits from a luxurious new and pre-owned showroom, dedicated aftersales team and a workshop staffed by world-class Gaydon-trained technicians. As a result, both current and future Aston Martin customers from Northern Ireland and Ireland can continue to expect the highest levels of customer service. Attendees were also treated to a private viewing of the new Aston Martin DB10 which will be seen in the upcoming James Bond film Spectre. Also included in the […]

30 years after the launch of the original Range Rover in North America, Land Rover has launched its newest model, the 550-hp, standard wheelbase, Range Rover SVAutobiography Dynamic, with sales of the ultra-luxury SUV in the U.S. starting this month. After almost five decades of Range Rover history worldwide, Land Rover is showcasing the evolution of its iconic luxury SUV through four generations with a unique animation lasting 120 seconds. The specially commissioned video marks key dates in the history of the legendary SUV, showing how today’s Range Rover retains many of the design hallmarks established by the 1970 Classic as its latest derivative, the SVAutobiography Dynamic, begins sales in North America and around the world. Staff