John Surtees, the only person to win world championships on both four and two wheels, has been awarded a CBE in Britain’s New Year’s Honours list 2016. 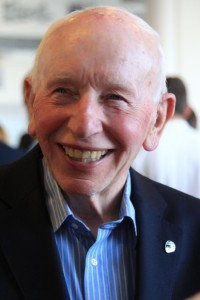 The award is in recognition of his services to motorsport and the charitable work of the Henry Surtees Foundation, named in honour of his son, who lost his life in a Formula 2 crash at Brands Hatch in 2009. The foundation provides vital support for those who have suffered injuries in accidents.

Upon the announcement John Surtees said “I am obviously honoured to receive this further recognition.  It is recognition, as far as I am concerned, not only for myself but for the world of two and four wheeled sport and the teams I have worked with.  Fast forward to more recent times I would thank and include in this honour all those that have helped and supported our dreams, ambitions and work for the Henry Surtees Foundation.”

John Surtees enjoyed a glittering competitive career dominating the British circuits in 1954 and 1955 before starting his World Championship career on two wheels with winning the 500cc Isle of Man TT and the 500cc World Championship for the first time.  John had ridden Triumph, Vincent, REG, NSU and Norton before joining MV Agusta. He recorded 38 motorcycle grand prix wins..

John Surtees combined contesting and winning two World Motorcycle Championships in 1960 with being invited to join Colin Chapman’s Lotus Formula One team to drive when his motorcycle commitments allowed. He finished second in the British Grand Prix and set pole position and record lap and led the Portuguese Grand Prix until having to retire late in the race

Retiring from motorcyles at the end of 1960, after a seamless transition to four wheels, he took his first Formula One Grand Prix victory at the Nurburgring in 1963 in his first year at Ferrari before going on to win the world championship the following season.

He finished second in the 1966 Formula One World Championship driving two marques of car after his split from Ferrari and his joining the Cooper Maserati team.  He won the prestigious inaugural Can-Am Sports Car Championship Series in America driving a Lola T70.A move to Honda followed for 1967 and with the RA 301 in which John played a large part in its development; he won the 1967 Italian Grand Prix at Monza.

Surtees also enjoyed considerable success in prototype sportscars winning at circuits such as Sebring, Nurburgring and Monza.   He gained a podium at the Le Mans 24 Hours in 1964.

The Henry Surtees Foundation aims to raise funds to support accident care, and in particular the introduction of new technology into the various services in order to save time and therefore injury and complications.  It is working on projects to help educate and train young people with motorsport-related programmes in technology, engineering and road safety instruction for two and four wheels. The worthwhile causes supported by the Henry Surtees Foundation include the Kent, Surrey and Sussex Air Ambulance Trust, the Great North Air Ambulance, The Great Western Air Ambulance, The Midlands Air Ambulance and regional Blood Bike groups and Darent Valley Hospital

Jaguar Land Rover North America, LLC is proud to announce that the 2017 Jaguar XE 20d has received the Vincentric Best Fleet Value in America award. The annual Vincentric Best Fleet Value in America awards recognize the specific vehicle and trim with the lowest total cost of ownership in the greatest number of measured lifecycle cost scenarios. The 2017 Jaguar XE 20d was awarded in the Premium Luxury Mid-Size Sedan segment with research determining the highly efficient diesel-powered luxury sedan has the lowest fuel costs in its class. Staff

More than 130 dealer representatives attended MG Motor UK’s annual Dealer Conference and Dealer of the Year Awards in Birmingham last week, marking the start of an exciting and busy year ahead for the iconic British brand. Dealers were treated to the official unveiling of the New MG ZS EV, the iconic British brand’s first battery electric car which is set to launch in September 2019. They also heard about “Momentum & Growth”, MG’s mid-term sales plan which will drive the business to treble its sales volumes over the coming years. Significantly, MG also used the Dealer Conference to announce the launch of its aftersales customer retention programme, a key initiative to generate increased service profitability through the rapidly growing MG parc. Staff