The Jaguar Owners Association of North Texas (JOANT) again held its Concours D’Elegance in the quaint setting of the Down Town Square in Carrollton Texas. This event had a purpose greater than giving Jaguar Owners the opportunity to put their cars on display. That purpose was to honor longtime club member and major contributor to the success of the club, David Nichols. David had been a member for longer than anyone can remember and held almost every position needed to keep the club running. Lately, he has been the Chief Judge for the concours, so holding this event in his honor was only fitting.

There was a lot of preparation needed for this event and the majority of the club members pitched in to do that preparation. Arrangements were made with the City of Carrollton to reserve all of the parking spots around the Down Town Square. Owners of nearby parking lots were contacted to allow overflow parking if needed. The American Legion / Veterans of Foreign Wars lodge near the square allowed the club members to use their facilities and cool off if needed. They also had doughnuts and coffee. The JOANT web site was set up to allow online registration or to print out hard copies of the needed forms. Regional Jaguar clubs were contacted and invited to attend. The event was added to the Jaguar Journal calendar as well as many other automotive interest websites.

All of that preparation made it possible for 39 Jaguar owners to display their pride and joys. There were 14 cars entered in the Championship and Special Division and 14 cars entered in the Driven Division. Another 11 owners just wanted the club members and public to see their cars on Display. As you would expect, the last minute cleaning and polishing of the cars went on most of the morning. Finally, at noon the “rags down” command was given and it was time to relax, have some lunch, and visit with the competition (I mean fellow Jag owners). The formal judging started at 1:00 using the judging score sheets approved at the last Annual General Meeting. The judging teams were made up of JOANT, Jaguar Club of Austin, and Central Oklahoma Jaguar Association members. The judges were challenged a little by the strong winds that kept blowing the sheets off the clipboards. The upside of the wind was that it offered some cooling for the 90+ sunny day.

The judging finished around 3:00 and the site cleanup started. The tents put up for shade were taken down, the barricades and cones used to reserve the parking spots were gathered up and returned to the city. Once the cleanup was done, everyone started getting ready for the awards banquet at the host hotel, Hilton Garden Inn. There were 52 people that came to the banquet and enjoyed the nicely prepared meals. The longtime chairman of the JOANT concourse, Alan Barclay was the master of ceremony for the awards presentation. He started the presentation with a few words about David Nichols and all he had done for the club. He thanked his wife, Judy Nichols for all of the support she gave David and the club. Then he moved on to making the award announcements. Most of the announcements came with a little history on the winners or a little teasing on some past items. The banquet ended but the evening was far from over for many of the club members. 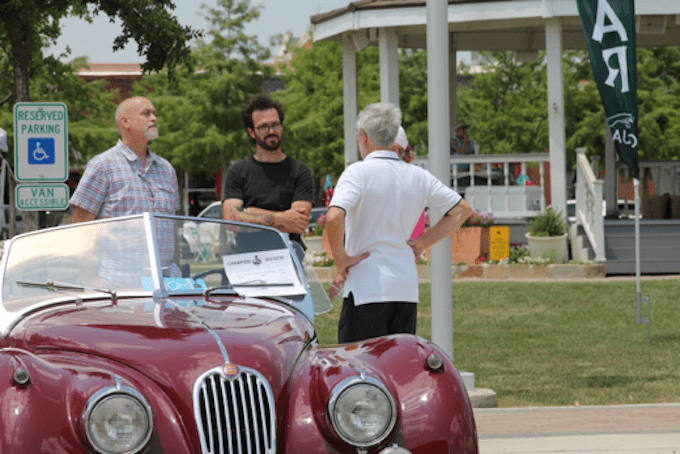 Note – Thank you to Don Marpe, Concours Chair, for this event report.

In the Fall – The Atlanta Concours d’Elegance 2017

January 26, 2017 Staff Highlights Comments Off on In the Fall – The Atlanta Concours d’Elegance 2017

As the Atlanta Concours d’Elegance enters its 2nd year within the highly competitive and globally recognized collector car realm within the U.S. market, the September 30-October 1st weekend’s premier automotive showcase takes on a broader format with a larger range of esteemed entries already in place.  While continuing to partner with Panoz and securing the prestigious grounds of Chateau Elan in Braselton once again, numerous newly shown collections and a minimum of 150 entries from 18 states, as well as Eastern Canada entrants, are anticipated – all vying for the prestigious ‘best of show’ award, among other notorieties.  Sports Car Market Publisher and Host of Velocity’s “What’s My Car Worth” Keith Martin returns, to take on the revered ranking of Chief Judge. Highly specialized collections and prior award winners will be competing throughout the weekend, including a 1956 Class-winning Austin […]

UK Concours of Elegance at St James’s in Central London

April 8, 2013 Staff Events Comments Off on UK Concours of Elegance at St James’s in Central London

Thorough Events Ltd, organiser of last year’s inaugural UK Concours of Elegance at Windsor Castle, has announced an extraordinary new location for the 2013 event. To take place from September 5-7, the 2013 Concours of Elegance will be held in St James’s in Central London in an area that encompasses the gardens of 300 year-old Royal Palace Marlborough House, adjacent to The Mall and St James’s Palace, official residence of the Sovereign. Special permission has been granted for the Concours of Elegance to use this rarely accessible space and it will follow a similar format to last year’s flagship event: 60 of the rarest and most historic cars from around the world on display on the lawns of Marlborough House’s vast walled garden. His Royal Highness Prince Michael of Kent has agreed to become Patron of the annual Concours of […]

The FIA World Endurance Championship is ready for action in the Wild West; as the 6 Hours of Circuit of The Americas is set to take place this weekend in Austin, Texas. After winning last time out in Mexico with the #95 V8 Vantage GTE, Nicki Thiim and Marco Sorensen will be hoping to continue that run of form this week and repeat last year’s victory in Austin; a result that catapulted their 2016 championship bid. Staff