A significant milestone was reached today as the ‘key’ to the building that will house the new £50m McLaren Composites Technology Centre (MCTC) was handed over to McLaren Automotive ahead of final fitting out. 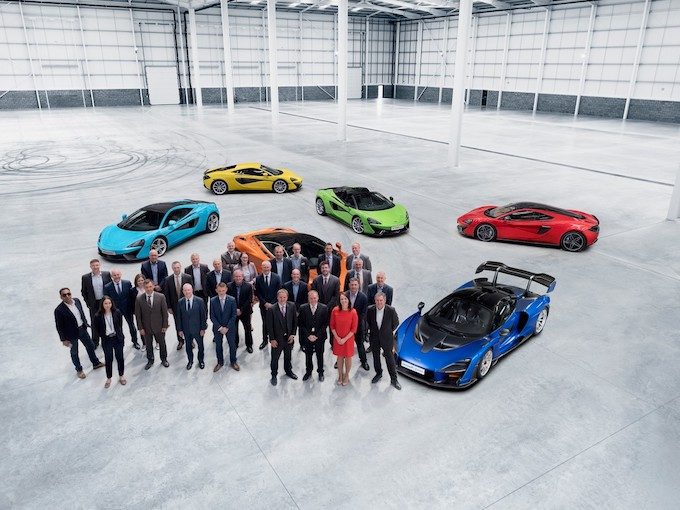 The MCTC in the Sheffield region will be the Yorkshire-based facility where McLaren will innovate the process for making the ultra lightweight and strong carbon fiber tubs that are at the heart of all of its luxury family of sports cars and supercars. The finished tubs will then be sent to the McLaren Production Centre in Surrey where the company’s vehicles have been hand-assembled since 2011.

Ruth Nic Aoidh, McLaren’s Executive Director, Commercial and Legal, received the ‘key’ to the building from Owen Michaelson, Chief Executive of Harworth Group plc who have built the unit for McLaren’s use at the Advanced Manufacturing Park in Rotherham. On display for the occasion were the company’s current family of products including members of the Sports Series and Super Series as well as a rare appearance by the McLaren Senna, all 500 units of which have been allocated to customers.

When open, the MCTC will be home to only McLaren’s second-ever production facility and the first outside its native Woking. Around 45 McLaren employees are already housed at the University of Sheffield’s Advanced Manufacturing Research Centre (AMRC), innovating the process for creating lightweight tubs and when fully operational, the team will grow to around 200 people.

Carbon fiber has long been a part of McLaren’s DNA, the company having introduced the very first carbon fiber chassis into Formula 1 in 1981. Carbon fiber’s innate strength and lightweight properties mean that the company has never made a race car, sports car or supercar without it since.

Also on hand to witness the handover alongside Harworth Group plc were a range of stakeholders closely associated with the build including senior representatives from Sheffield City Region, Sheffield City Council, Rotherham Borough Council, contractors JF Finnegan and architects The Harris Partnership.

The building will now undergo several months of fitting out which will see all the manufacturing equipment installed, including a giant press that will make its way from Germany this summer.

Getting the key to the building that will house the McLaren Composites Technology Centre is a major milestone for us and the next chapter in our growth as a young, ambitous, innovative company.

It’s also an important day for all of the many individuals, organisations and suppliers who have supported and shared our ambitious plan to make the Sheffield region home to McLaren’s second production facility. This project is also testamanet to their shared mindset and the region’s long association with advanced materials that we are able to draw on and benefit from.

Over the coming months the Centre will be fitted out with the production equipment we need to become fully operational next year and support hundreds of skilled jobs.

Key organizations and businesses involved with the MCTC include:

MG’s Investment in the Future

New state-of-the-art test facilities have been installed at MG Motor UK’s Longbridge site demonstrating investment in technology, and commitment to the future and the quality of its products. £1.2 million has been invested to install a fifth engine test facility and to further enhance the vehicle rolling road on-site at MG HQ in Longbridge. The state-of-the-art engine test facility has significant improvements on the existing test resource and brings with it a major step change for MG Motor’s test and development capability. Staff