One of the first 500 E-Types produced by Jaguar has been found in pieces in France and is to be brought back to life by world-class restorers Classic Motor Cars of Bridgnorth (CMC).

Chassis No. 875256 is one of the very early 3.8 left-hand drive, open two seater, outside bonnet lock models with all matching numbers. It was delivered new to the Belgium Motor Company dealership in Brussels in July 1961 and was subsequently sold to ‘Societe de Civel Immeubles en Afrique.’ It resurfaced in France in 2015 and records indicate that it was imported from Luxembourg in 1975.

The car is very complete, although in parts, and was bought by the previous owner to be restored. He gave it to French restorers who started work on the car, but shortly after took it away and kept it safe in his garage in Grigny in the southern suburbs of Paris, France.

Chassis No. 875256 is literally in boxes in our workshops awaiting a much-needed nut and bolt restoration. It will be a challenging project but all the factory parts are there and our skilled fabricators and technicians will do all they can to save as much as the original car as possible. It will roll out of our workshops just like it left Browns Lane in 1961.

We are currently delving through the car’s history files to find out more about its life. These early E-Types are sought after by collectors and investors alike, and the fact that they keep on resurfacing after years in the dark is still amazing.

CMC is famous for having restored some of the most historic E-Types, including Lofty England’s Chassis No. 4, the Lindner-Nöcker Lightweight and 1VHP, the first RHD Coupe off the production line and the first of only four outside bonnet lock cars. 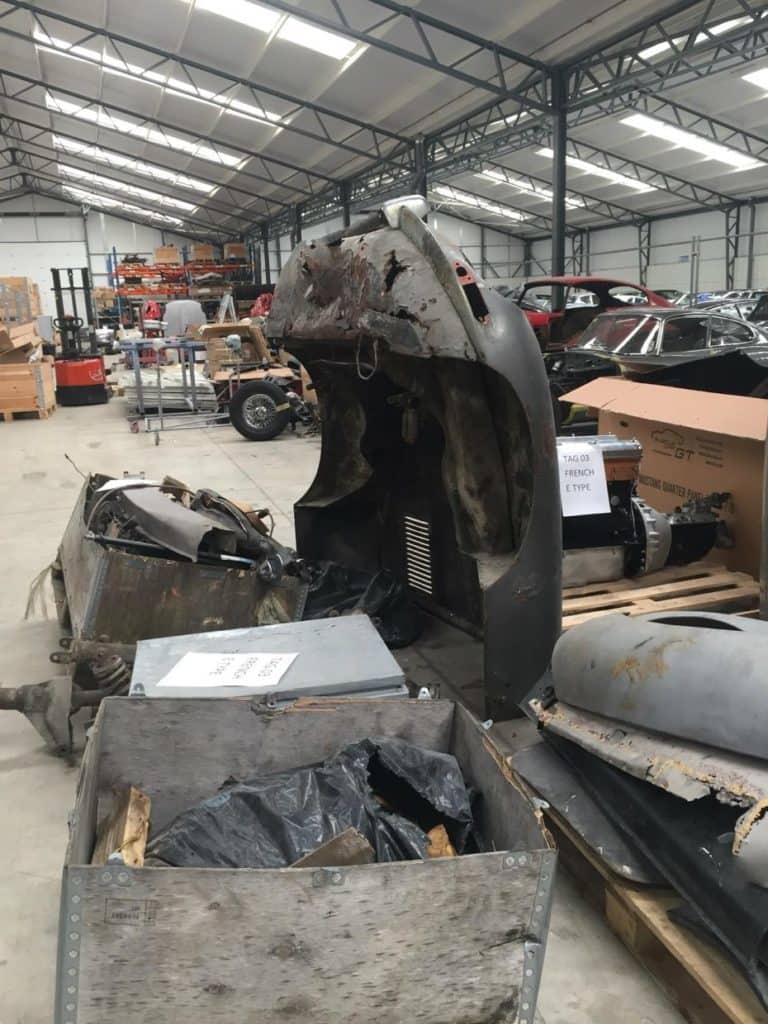 In 2016 and after 2,956hrs, they completed the restoration of E-Type Chassis No. 15, also found in France in a very sorry state. This was the fifteenth right-hand drive fixed-head coupe E-Type to leave Jaguar’s production line in 1961 and the press car that turned heads at the Scottish Motor Show that year.

A 1958 Aston Martin DB2/4 Mark III, which has lain dormant in storage for over 35 years, is to be restored by leading classic car restoration company Classic Motor Cars of Bridgnorth (CMC). The DB2/4 was recently purchased from the Bonham’s Newport Pagnell Aston Martin works sale on behalf of a client. The car was sold for £104,540, going over its estimate of £30-50k. “The car was an attractive restoration project in 1977 when it entered storage, despite the fact that it had lead a hard life,” said Nick Goldthorp, Managing Director of CMC, “There were splits in the front suspension turrets which had been welded and crash damage to the offside body and rear chassis which were repaired at the time. But it would now appear that the chassis needs re-aligning.” Nick added: “The Aston needs a total restoration, […]

Rare Last E-Type to be Sold at Silverstone Auction

Silverstone Auctions is to auction a Series II Jaguar E-Type Fixed Head Coupé that is believed to be the last of its type ever sold as new. In excellent condition and never having undergone a major restoration, the Jaguar Light Blue E-Type will go under the hammer at the Salon Privé Sale at Blenheim Palace on 2nd September. The UK specification right-hand drive E-Type was built in August 1970 and was eventually delivered to dealer Charles of Pirbright, where it remained in the showroom for five months until it was sold to its first owner on 7th August 1971, likely making it the last Series II Fixed Head Coupé to find a home. Staff

The sixtieth E-Type to leave Jaguar’s production line in 1961 went back to Somerset to surprise its previous owner on his 83rd birthday after undergoing a full ‘nut and bolt’ restoration at leading restorers Classic Motor Cars of Bridgnorth (CMC). When former Royal Naval Commander Bob Reed put his pride and joy, a rare Jaguar E-Type into auction little did he expect that it would sell for £109,000 or that it would be purchased by someone who would spend substantially more than the purchase price to bring it back to its former glory. Bob bought the car in February 1965 and owned it for more than 45 years, raced it and only decided to sell it because he couldn’t afford to restore it and didn’t want to see it deteriorate further. Staff