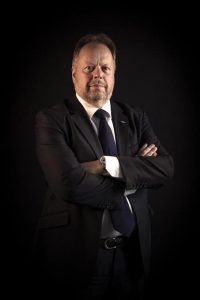 honored with the Vantage Award at the annual Historic Motoring Awards at the Sheraton Grand London Park Lane Hotel. Although named personally as the winner, Palmer accepted the award on behalf of everyone at Aston Martin.

The Historic Motoring Awards, now in its eighth year, recognises the elite in the international classic automotive world. The winners are selected by the experts at Octane magazine and an international panel of judges from the motoring world. Brand new for 2018, the Vantage Award celebrates “an individual or company who has made an outstanding contribution to the world of Aston Martin”. The judges were looking for someone who not only champions the brand, but lives and breathes it and has made waves in making it what it is today.

After joining Aston Martin in late 2014, Palmer set to work on the ‘Second Century Plan, a transformative plan that would see the company replace its entire sports car range over the course of seven years. Starting with the DB11, followed by the new Vantage and most recently the DBS Superleggera, the plan is already ahead of its targets. Earlier this year it was announced that Aston Martin’s profits grew by a quarter of a billion pounds in 2017, heralding the completion of the financial turnaround of the iconic British luxury carmaker a full year ahead of schedule. With Palmer at the helm, the company made its stock market debut just a few weeks ago.

The highest honours are always those made from within your peer group or own industry. In accepting this award, I do so on behalf of everyone at Aston Martin. I’m proud of everything we have achieved and I am excited by the future that this company has to look forward to.

The Board of Aston Martin Lagonda announces the appointment of Tobias Moers, as Chief Executive Officer. Tobias, 54, will be appointed to the Board as an Executive Director and will take over from Dr Andy Palmer. […]

Dr Andy Palmer will trade his business suit for a race suit this weekend when he takes on the challenge of competing in a 24-hour motor race. The Aston Martin President and CEO will race in the Hankook 24 Hours of CoTA (Circuit of the Americas) in Austin, Texas on 11-12 November. Naturally, Palmer’s car of choice is the Aston Martin Vantage GT8, the very same car that won its class at the Nürburgring 24 Hours earlier this year. He will share driving duties with Paul Hollywood, John “The Voice of Le Mans” Hindhaugh and Peter Cate. Staff

Aston Martin has announced it will widen its product offering for markets outside of Europe. Based on a conditional offer of an exceptional regional growth fund from the UK Government, Aston Martin will commence work this year on new models intended to broaden its customer reach in export markets such as China and the Middle East. The UK Government has committed support up to the value of £6.9 million, conditional on investments in new products from Aston Martin. Commenting on this news, Aston Martin CEO, Dr Andy Palmer said: “Expanding our product range to enable a greater reach into export markets is an essential part of our Second Century business plan. Having this support from the Government to help execute the plan is a meaningful vote of confidence in the future of the company.” Press release courtesy Aston Martin, 29 March 2015, […]