Bentley is pinning its green future on more efficient gasoline engines powered by biofuel combined with lighter-weight body construction, rather than a radical switch to diesel or hybrid powertrains.

“We don’t think our customers, particularly in North America and Europe, are ready for a diesel Bentley, said Uli Eichhorn, Bentley chief engineer, on Tuesday at the Geneva motor show. 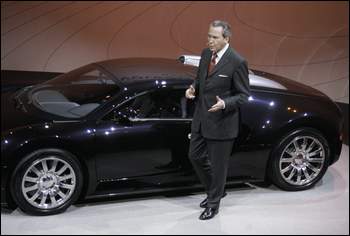 Although Bentley Chairman Franz-Josef Paefgen refuses to rule out a diesel powertrain, Eichhorn said: “Not ruling it out does not mean it is our top priority.”

Hybrid powertrains don’t fit the typical usage cycle of a Bentley, according to Eichhorn. “(Hybrids) are very good in cities and stop-start driving, but that’s not where out cars are used.”

At the Geneva show, Bentley announced a plan to move toward a fleet average of 120g/km on a “well-to-wheel” basis by 2012. Bentley’s fleet currently averages 450g/km on a well-to-wheel basis.

“This is a major step in the history of Bentley,” Paefgen said, “reflecting the increasing expectation from our customers around the world for performance motoring with fuel efficient engines.”

New engine management systems and improved transmissions will cut around 15 percent from tailpipe emissions, which currently average 400g/km across the range.

Bentley said it would introduce a new powertrain by 2012 that will deliver a further 40 percent reduction in fuel consumption. The powertrain will take tailpipe emissions down to 260 g/km.

Details of the new powertrain weren’t revealed, but it is widely interpreted to mean a mild hybrid using stop-start technology and de-clutching alternator, running on second-generation biofuel.

Bentley expects second-generation biofuels to be widely available around the world by then. Gen 2 biofuels are crated from waste material and don’t compete with production of food crops.

BMW’s Oxford factory in England is currently the favored location for building an electric version of the Mini despite Britain’s planned departure from the European Union, two sources familiar with the company’s thinking told Reuters on Wednesday. Any decision by the German carmaker to commit to further spending at Oxford would be a boost to the British government, which has been warned by businesses at home and abroad that Brexit will hit investment. Staff

While other models were sleek and streamlined, the Morgan looked and sounded like sports cars were supposed to. But its throaty roar could be a thing of the past, at least on one model, with the 101-year-old company developing an electric low-carbon version of the iconic vehicle. The electric car will be made of aluminium and be powered buy a plug-in battery. Morgan is co-operating with two other British companies, Zytek and Radshape, to produce a concept car which could be seen for the first time at the Geneva motor show next year. In fact two cars are being produced. One will be held back for further engineering research, while the other will be on public view as Morgan decides whether to develop a version which could be put on sale. The project is being backed by a £100,000 grant from the […]

In June 2007, The Lightning Car Company announced its intent to develop electric technology for a luxury British sports car – the Lightning GT. Today sees the unveiling of its evolutionary design. This super car with its outstanding presence & performance is set to put British sports car innovation well and truly back on the map. Designed to accommodate the latest battery and motor technology and reflect its 100% electric power and performance, the electric Lightning prototype is being hand-built by a small team of passionate British engineers, designers and collaborators. Whilst the rest of the automotive world engages in the hybrid, hydrogen or electric debate, the Lightning Car Company firmly believes its 100% Electric Lightning GT will help kick start the market for performance EV’s. Without a significant positive shift in perception, electric motoring will remain a huge compromise […]