It’s been twenty years since Aston Martin, deeply in debt and little more than an automotive anachronism, was swallowed up by Ford empire. Say what you will about Ford’s other British luxury marques, the past two decades have been good ones for Aston.

When Ford acquired the brand, in 1987, Aston sales plunged to as little as 42 cars a year and at one point, keeping the assembly line rolling depended on the sale of a single car to a wealthy — and quite drunk — British aristocrat. These days, Aston’s aspirations are positively mass-market, with an array of new products promising to push volume up near 10,000 cars a year, and the company well in the black for the first time in its 93-year history.

That’ll be good news for the new owners, David Richards, CEO of racing’s Prodrive and Chairman of Aston Martin Racing, and two Kuwaiti banks. They’re investing $925 million to take control of the company, though Ford will maintain ties to its former subsidiary by holding onto a 15-percent, non-controlling stake. 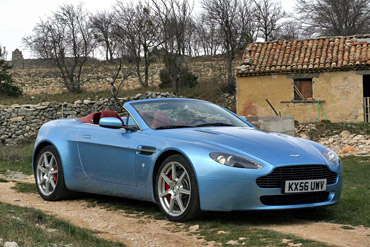 To understand Aston’s transformation, we caught a flight over to Provence, the painfully pretty French countryside where the British marque provided us an opportunity to test drive the all-new V8 Vantage Roadster.

The Vantage coupe made its appearance barely 18 months ago and served as the primary catalyst for the brand’s revival. Like Bentley’s Continental GT, the Vantage provided a new and more affordable entry point for Aston aspirants, roughly doubling sales in the process. The new roadster is likely to conjure up similar magic, based on several days of driving through the narrow, winding lines of the French countryside.

Low and sleek, few cars have the visual stopping power of the Vantage, roadster or coupe. The nose tapers gracefully into the distinctive Aston grille, a small brand badge wedded to the hood above. The overall look is balances between elegance and machismo, with slightly flared wheel wells hinting at the raw power under the skin. A chromed accent line darts across the side gills, flowing into doors that swing slightly upward, almost scissor-like, when opened. The hips rise gently into the tail, a subtle spoiler capping the deck lid.

With the roadster, the steeply raked windshield wraps into a multi-layer ragtop that stows neatly into the trunk. Aston designers have done a marvelous job of maintaining the dramatic roofline of the coupe. The company’s engineers have, in turn, crafted a convertible tap that is quick — by our count requiring just 20 seconds to operate — and surprisingly effective at sealing off wind and road noise when raised.

We picked up our roadster in the town of Gorges, an ancient city straddling steep limestone hills overlooking orchards that have been operating since the days of the Romans. The roads leading up the cliffs haven’t been widened much in the millennia since, those they’ve been mercifully well-paved.

Slipping the key into the ignition, we reached over to tap the Start button crowning the Vantage’s center console. The big V-8 fired up with a delightful roar that echoed off Gordes’ limestone buildings. Slipping into gear, we steered our way out onto the main roadway leading into the local wine country.

The word, graceful, immediately came to mind. Though we were well aware of the power under the hood, the throttle was easy to manage, with none of the bucking that you often experience at low speeds with other high-performance sports cars.

As we came to the end of Gordes, and the tarmac widened up, we gave the hungry V-8 some gas and listened in awe as the engine revs topped 4000, a delineation marked with a resonant “brap” that likely could be heard halfway to Paris.

That marks the transition in the 4.3-liter V-8’s variable inlet camshaft timing, which is designed to enhance breathing at both lower and higher revs. It’s as smooth an engine as you could imagine considering the power it’s capable of, a solid 380 horsepower and 302 lb-ft of torque.

The all-alloy engine is mated to a smooth and extremely quick-shifting six-speed manual gearbox that’s rear-mounted, Vantage project manager David King explains, “to ensure a perfect, 50-50 weight balance.” We’d be hard-pressed to find fault with the stick, though in the real world, Aston expects the overwhelming majority of owners to opt, instead, for the electronically-shifted version of this gearbox, dubbed Sportshift.

Don’t confuse this with a paddle-shifted automatic. But don’t write it off because of the drum of complaints you might have heard about BMW’s SMG or Maserati’s DuoSelect. Aston’s auto/manual is quick — though not as fast as Ferrari’s — and quite a bit of fun to drive. Our biggest complaint is the curious pause after you press the “R” button to go into reverse. Senior Aston officials promise to get that little inconvenience addressed with new software.

With 0-60 times claimed at 4.9 seconds and a rated top speed of 175 mph, the Vantage roadster isn’t the fastest car you can buy for your money, but it’s comfortingly close. What it doesn’t deliver immediately off the line it makes up for at cruising speed. Slower cars were passed in a blur as we nudged the speedometer needle higher and higher.

The roadster is a confidence-builder. The longer you drive it, the more you want to push its limits. Provencal country roads can be treacherous, turns coming out of nowhere, followed by steep hills and dales. The roadster only embraced the opportunity, like a thoroughbred led out to the track, smoothly carving its way around the tightest turns with only the most minimal body roll.

The Vantage rides on an independent double-aluminum wishbone up front and the same arrangement in back. There are monotube shocks and anti-roll bars and anti-dive technology keeps the car remarkably level during both full-out acceleration and panic braking. Interestingly, Aston opted for 15-percent stiffer springs than are used in the Vantage Coupe, which enhances that straight-and-level ride.

The car, as a whole is surprisingly forgiven of missteps, regaining its composure with nary a complaint. The brakes deserve particular kudos. As with the throttle, their operation is surprisingly smooth, linear and progressive, with plenty of stopping power but no grab.

If all this sounds a bit too much like a love note, it probably does come close, but we do have some modest complaints, most of them involving the interior. The cabin is, overall, quite tastefully outfitted, with plenty of leather and suede-like alcantara. So why does the center stack not quite live up to the overall look-and-feel? For one thing, it took quite some time to find the buttons controlling the navigation system, which relies on a screen that pops out from the top of the instrument panel. The driver’s gauges are, however, far more satisfying, both lavish and functional in design.

But why, on a car carrying a price tag of $126,400 (U.S.) does Aston not offer a power tilt-and-telescope steering wheel? And why do we not get “express” windows, which operate with one touch, up or down, as we do in a mid-range Hyundai? And since we’re niggling here, can we also have a one-touch start, like Bentley, BMW, and Mercedes-Benz offer, so we don’t have to hold the button until the engine catches?

The Vantage Roadster’s seating effectively balances comfort and support. Even as a long day of driving, we felt refreshed and ready to keep going. But due to the tight squeeze between instrument panel and cargo wall, there is a trade-off between recline angle and legroom.

Those complaints aside, there isn’t much to fault with the Roadster and we can see why Aston expects a sharp boost in sales, with the ragtop version likely outselling its hardtop sibling.

Just how much is up for Aston remains to be seen. With the sale of the company now official, the British maker’s frighteningly lean management team can get back to what matters, including the development of still more product. That includes the Rapide, Aston’s first-ever four-door.

Intriguingly, the Rapide will roll out about the same time as Porsche’s own sedan/sports car hybrid, the Panamera, is due to reach showrooms. For better or for worse, there are likely to be a lot of comparisons made between the two brands in the coming years, especially as Aston establishes itself as a serious contender, rather than an eccentric alternative.

Uli Bez, the chief executive who steered Aston’s product and business renaissance, insists his company has no direct competitor. Perhaps, but while we understand his argument, there’s likely to still be some cross-shopping. More than a few potential customers are certain to make comparisons between the Vantage Roadster and, for example, the blisteringly fast Porsche Turbo.

Measured by raw performance, Porsche would likely have the upper hand. But the appeal of the Vantage, roadster or coupe, is something else entirely. It’s as much about exclusivity, distinctiveness, and style. The Porsche will turn your head, but the Aston’s likely to make your eyes pop.

Despite the recent success of Aston Martin, it remains a surprisingly unknown brand in the U.S. market, which accounts for a relatively small, 28 percent of worldwide sales. Increasing American awareness is one of the big projects for Aston’s new owners, but a car like the new V8 Vantage Roadster should help. In an increasingly crowded field, it’s real standout.

On the eve of the 2016 World Endurance Championship opener at Silverstone, Aston Martin Racing has unveiled a bespoke selection of wings for the Vantage GTE in celebration of the premiere endurance series. Every Vantage produced for the road or race track is crafted by hand and the wings that adorn each model make no exception. Commissioned by the British marque’s personalisation service ‘Q by Aston Martin’, the collection has been created by a highly accomplished and talented workforce based in Birmingham’s famous Jewellery Quarter. Each of these unique pieces celebrate each of the rounds of this year’s championship. With the series to commence with the 6 Hours of Silverstone, all three V8 Vantage GTE entries will be treated to a union flag inspired piece. Alternative designs of the iconic wings logo will be proudly displayed for the following eight […]

Aston Martins On Your Computer

Yes, you can now have an Aston Martin on your computers! Aston Martin has produced a beautiful screensaver that will make you droll on the keyboard. The interactive screensaver contains a selection of current Aston Martin photography, current product information and the latest company news. A feature has been included to allow you to stay up to date with the latest news and content with a live feed. The screensaver is available for both Windows and Macintosh computers and is available at http://www.astonmartin.com/gallery/screensaver. Staff

An old friend always used to say that “Jeeps are famous, but Land Rovers are legendary.” I know some Jeep fanatics who might disagree with that, but many of us have been fond of the Land Rover, and its entire family tree, for many years. Our video this week looks back over Land Rover’s history through the eyes of some of the men who were there. This is the story of Land Rover – from its inception as a way to save the Rover company to its becoming the SUV of choice for the landed gentry. The design for the original Land Rover vehicle was started in 1947 by Maurice Wilks, chief designer at the Rover Company, on his farm in Newborough, Anglesey. It is said that he was inspired by an American World War II Jeep that he used […]