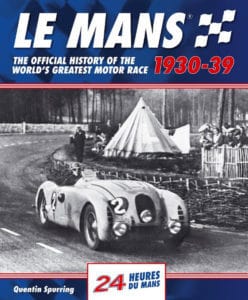 received notice of a new book by Quentin Spurring title “Le Mans: The Official History 1930-1939” published by Evro Publishing Limited. Officially licensed with the ACO, the organizers of the annual Le Mans 24 Hours race, this beautiful book is the seventh title in this decade-by-decade series and completes coverage of the endurance classic from its very beginning to the end of the 20th century.

This title covers the nine races of the 1930s (no race was held in 1936) in which honors were divided between Italian, French and British manufacturers. Each race is exhaustively covered in vivid photographs, an insightful commentary providing more detailed information than has ever been published about the period, and full statistics.

It includes great stories such as:

Compiled by an acknowledged authority of this legendary race, this series of books has come to be treasured by all enthusiasts of sports car racing.

Motoring fans keen to expand their libraries, and maybe get an autographed copy too, should head to the inaugural Classic & Sports Car – The London Show at Alexandra Palace this autumn. That’s because the show will feature a host of world-class literary exhibitors, offering visitors everything from historical bestsellers to one-off coffee table books and, of course, a wide selection of motoring magazines. Some of the event’s Interview Stage guests will also be on hand to put pen to paper with some exclusive book signing sessions. Staff

Before reviewing Robert Morey’s delightful new book, The Philosophy and Psychology of British Car Restoration, allow me a moment of transparency and honesty:  I am a big fan of the Little British Car, henceforth known as LBC.  I’ve owned and lovingly cared for several Triumphs (two and four wheel) an MGB and played caretaker to a range of LBCs including an Austin Healey, TVR and even a V12 Jaguar (four carburetors!!)  So even if the book were the result of a dozen monkeys pounding keyboards for a month, I am likely to be favorably drawn to any book with the words British Car in the title. So with that mea culpa out of the way, Morey’s creation is a positive, cheery and satirically refreshing collection of reflections that perfectly mirror the author’s upbeat personality and automotive experience.  His use of […]

Aston Martin Racing has qualified on pole in both GT classes of the 2015 24 Hours of Le Mans with its #99 and #98 V8 Vantage GTEs. It might have been his first time racing at the world-famous Circuit de la Sarthe, but Le Mans ‘rookie’ Richie Stanaway (NZ) was quick to impress, posting the fastest lap and putting the #99 on pole. “That was the start we were looking for, but there’s still a lot of work to do to win the race,” commented Stanaway. “The car feels great and we’re all on top form so we just need to bring it all together on Saturday.” But it wasn’t only Stanaway who took pole position for Saturday’s 24-hour endurance event. In the GTE Am class, Pedro Lamy (PT) set the fastest time in the #98 Vantage GTE and will […]