The second-generation McLaren Super Series, which will be unveiled on March 7 at the 87th Geneva International Motor Show, is set to redefine expectations of supercar capability with phenomenal stopping performance to equal its extreme acceleration. Reaching 200km/h (124mph) in 7.8 seconds, McLaren’s new supercar can then brake to a standstill in just 4.6 seconds and 117 meters – six meters less than the 650S and almost on par with the legendary McLaren P1 .

“As well as delivering the outstanding driver involvement and enjoyment for which the brand is renowned, McLaren’s new supercar will also excel in everyday driving,” explained McLaren Automotive Chief Test Driver, Chris Goodwin. “The extreme performance and dynamic prowess of the second-generation Super Series, honed by testing at the limits and beyond, provides the perfect foundation for it to be the most complete supercar across the full range of use.” McLaren has released a short film showing the car during dynamic testing, driven by Chris Goodwin. 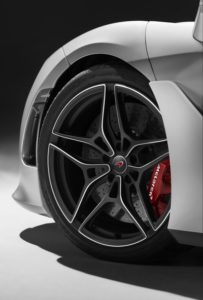 Working in close co-operation with Pirelli, McLaren engineers developed a new, bespoke Pirelli P Zero Corsa tire for the second-generation Super Series that supports a six per cent improvement in mechanical grip compared to the McLaren 650S. The Corsa tire is one of a range of Pirelli tires developed specifically for McLaren’s new supercar, all of which provide superb driver feedback as well as ensuring extreme levels of grip and braking performance.

Further details of the second-generation McLaren Super Series will be confirmed on March 7, when a full range of images will also be available.

A new era will begin for McLaren Automotive this March with the launch of the second generation of its Super Series at the 87th Geneva International Motor Show. The first of the 15 new cars cited in the company’s Track22 Business Plan, the second-generation Super Series is also the first replacement of a product family by the British manufacturer of luxury sports and supercars. “Super Series is the core of the McLaren business and personifies the blend of extreme performance, crafted luxury and unparalleled driver involvement that is the McLaren heartland,” explained McLaren Automotive CEO, Mike Flewitt. “This is the first time we have replaced a product family and the new Super Series will be absolutely true to McLaren’s pioneering spirit in being a revolutionary leap forwards, both for our brand and the supercar segment.” The new Super Series is […]

Morgan has given us a kind of glimpse of the new Aero 8. Not much really, but enough to keep us on the edge of our bucket seats. To quote the email announcement, “Only a few days left until we announce the latest evolution of our iconic Aero Range of vehicles at the 85th International Geneva Motor Show. Join us on the 3rd of March for the unveiling of the new Aero 8.” We can’t wait to see it! Any new Morgan is a cause for celebration. Staff

Aston Martin presented Lagonda Vision Concept in Geneva today, marking the beginning of a new range of state of the art, emission-free luxury vehicles. Production is planned to start in 2021. Lagonda aims to be the world’s first zero emission luxury brand. It will confound traditional thinking and take full advantage of the latest advances in electrification and autonomous driving technologies, which amount to the biggest revolution in land-bound transportation since the invention of the car. Lagonda will show how true luxury and modern design, far from being diametrically opposed interests, can exist in total harmony and enhance each other’s most desirable characteristics. We believe people associate luxury in their cars with a certain traditional and even old-fashioned approach because, to date, that is all that’s been available to them,’ commented . Lagonda exists to challenge that thinking and prove […]