Our video this week features a car you rarely see anymore, especially in the US, the Hillman Imp. The video takes a look at the production of the Hillman Imp at the plant in Linwood, Renfrewshire, Scotland. The program includes interviews with past members of the Linwood workforce. It also examines the wider workforce, trade union, management and government relationships which existed throughout much of UK manufacturing in the 1960’s and 70’s.

The Hillman Imp was a small economy car made by the Rootes Group and its successor Chrysler Europe from 1963 until 1976. It was made in many different forms and in addition to the Hillman marque was also marketed as both Sunbeam and Singer. Unveiled in 1963 after much advance publicity, it was the first British mass-produced car with the engine block and cylinder head cast in aluminum.The Imp was a direct competitor to the now much-more-famous Mini. It used a space-saving rear-engine, rear-wheel-drive layout to allow as much luggage and passenger capacity as possible in both the rear and the front of the car. It also used a unique opening rear hatch to allow luggage to be put in the back seat – very much a predecessor of today’s hatchback.

In addition to its all-aluminum engine, it was the first mass-produced British car to have an engine in the back and the first car to use a diaphragm spring clutch. The balk-ring synchromesh unit for the transaxle compensated for the speeds of gear and shaft before engagement, which the Mini had suffered from during its early production years.

For more on the Imp we can also watch this video from the show “The Car’s the Star”.

For more on the Impe, make sure to check out The Imp Club.  You can also read up on the Imp in “Our Imp: A Celebration” by Paul Coulter, “Rootes Cars of the 1950s, 1960s & 1970s – Hillman, Humber, Singer, Sunbeam & Talbot: A Pictorial History” by David Rowe, or “Hillman Imp: All models of the Hillman Imp, Sunbeam Stiletto, Singer Chamois, Hillman Husky & Commer Imp 1963 to 1976 (Essential Buyer’s Guide)” by Tim Morgan. 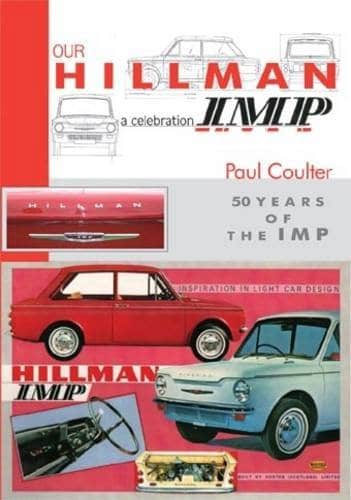 They may not be multimillion-dollar Bugattis, but around 30 rusty vintage cars were found in a barnyard in Norfolk County in England. The cars were mostly British marques like Austins, Rileys and Singers. There were also a vintage Daimler, a Lea Francis and a Sunbeam. A rare Morris Minor convertible from the 1930s is said to be the highlight of the lot, reports The Telegraph. The cars were hidden in undergrowth and left in derelict sheds, some with trees growing around them. They had not been driven since the 1950s. It took a team of eight men two weeks to clear the site and dig out and remove the vehicles with the help of a forklift. Staff

The Rootes Group, although only achieving a 10-12 per cent market share, were the sixth largest British car manufacturer: more importantly, during the 1950s, more than half the cars they produced were exported. Rootes Cars of the 1950s, 1960s & 1970s – Hillman, Humber, Singer, Sunbeam & Talbot by David Rowe is a new reference to these cars. With every model produced from 1950 onwards featured in full colour and with detailed information – including colour schemes, optional equipment, technical specifications, plus other manufacturers’ cars built using Rootes components – this is the ultimate book for all Hillman, Humber, Singer and Sunbeam enthusiasts. Cars produced by Chrysler/Talbot and Peugeot after their acquisition of the Rootes Group are also included. This book includes hundreds of original photographs, taken by the author at many car shows over a number of years, and […]

The subject of our Video of the Week this week is a Singer Nine from 1933. The Singers are cars that most people don’t know much about, if they know they exist at all. And yes, cue the sewing machine jokes. And the confusion that they are not MGs. Singers are gorgeous and fascinating cars in their own right with their own storied history. This example is a 1933 Nice Sport. To quote the video, Singer’s first sports car was introduced at the end of 1932. It featured cut-away doors, louvered bonnet and scuttle and distinctive helmet-type front wings. Under the bonnet was the classic 972cc single overhead camshaft engine and close ratio four-speed gear box making it especially suited to trials work. A Sports Nine achieved a notable success in June 1933 at the Le Mans 24 hour race. […]