Land Rover marked the production of the 100,000th Discovery Sport with a special surprise for one mum, Natalie Lipton, on Mother’s Day. (Mother’s Day in the UK was celebrated 6, March 2016.) The Lipton family had unwittingly purchased the milestone vehicle which was built at Jaguar Land Rover’s Halewood manufacturing plant, just 10 miles from their family home. To celebrate the milestone, which was reached just days before Mother’s Day in the UK, Land Rover went undercover with 7 year old Jacob and 5 year old Noah to find out just how this car could be made even more special for their mum. 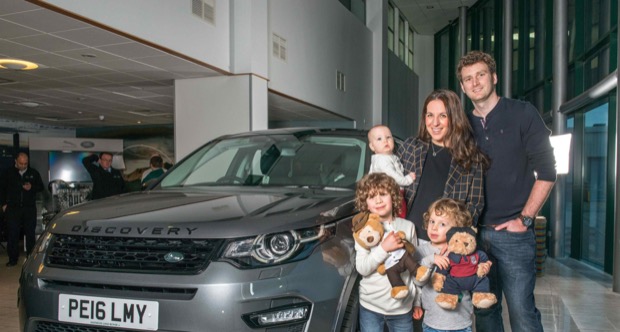 Accompanied by Paul Cleaver, Discovery Sport Vehicle Programme Director and Andy Wheel, Land Rover’s Chief Design Manager for Exteriors, the Lipton boys had an access-all-areas tour of the company’s Design and Engineering Centre at Gaydon. From experiencing driving virtual cars to developing clay models, Noah and Jacob provided the team with lots of inspiration and ideas for making this car special for mum Natalie.

Paul Cleaver said: “It’s fantastic that the Discovery Sport has reached this significant milestone. To know that this car has resonated with customers across the world is a testament to the whole team involved in its creation and delivery.

“The Discovery Sport is a truly versatile family car so it’s fitting that we are celebrating with such a special project from the Land Rover family to the Lipton family. It was fantastic meeting Noah and Jacob, they were enthusiastic, energetic and full of great ideas – definitely budding future car designers!”

To bring the boys’ ideas to life, a team of designers, suppliers and experts from Jaguar Land Rover’s Special Vehicle Operations worked to create special touches which were delivered lineside and placed in the car during production by the team at the Halewood manufacturing plant in Merseyside. Halewood officially began production of Discovery Sport in October 2015 thanks to a £200mn investment which bought an additional 250 jobs to the plant, ensuring three shift, 24 hour production. The 100,000th car, a Corris Grey HSE, rolled off the production line on February 29th, exactly 500 days after the first.

Richard Else, Halewood Operation Director said: “It is with an enormous sense of pride that the team here builds the Discovery Sport alongside the Range Rover Evoque. The introduction of these models has seen production at the plant quadruple and our workforce treble since 2010.

“This milestone, just like the 500,000th Evoque which came off the line in February, is a reminder that the Halewood manufacturing plant is responsible for bringing exceptional cars to customers in all four corners of the globe. I am however delighted that it is a mum, and her family, who live only a stone’s throw from our plant that have taken delivery of this very special car.”

The Discovery Sport which went on sale in December 2014 is now sold in over 170 markets, with the UK, Europe and China leading the charge. The car has already claimed more than 40 international awards including, most recently, Large SUV of the Year as determined by the What Car? Car of the Year jury.