A rare early Range Rover convertible conversion is due to be sold at Silverstone Auctions’ last auction of the year, The NEC Classic Motor Show Sale, on 14-15 November 2015.

Starting life as a 1973 Range Rover ‘Suffix B’, the car was converted in the late Eighties by Special Vehicle Conversions, who specialise in bespoke convertible conversions for Range Rovers of the period.

The rare right-hand drive convertible has covered just 62,500 miles from new and having recently been restored to its original Special Vehicle Conversions specification, it will be sold at The Lancaster Insurance Classic Motor Show auction with an estimate of £35,000 – £40,000. 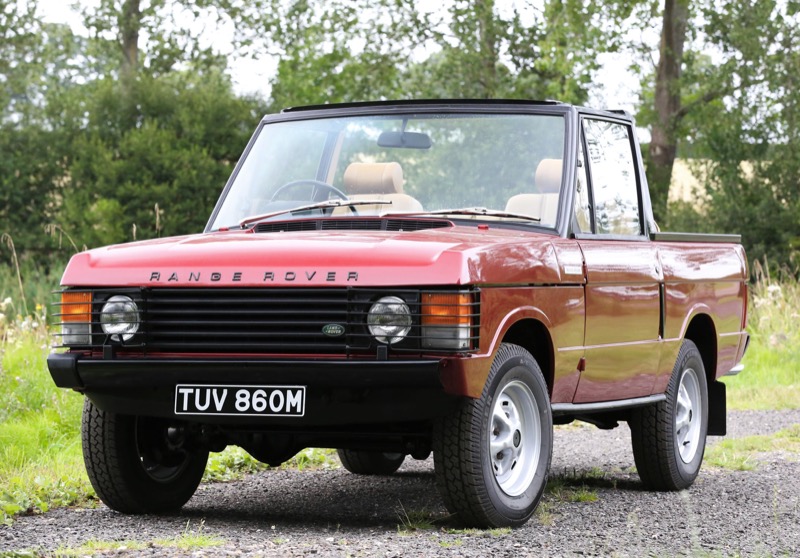 The car was apparently won by the previous owner in a card game in the Nineties, who then stored it in a lock-up as he didn’t have space in his garages. The vendor heard of the story and sought to try and find the car again in 2014. After trying to locate the car and with the help of Land Registry records, it was uncovered in superb condition – with its undersealed chassis still in fine fettle.

Later that year, the car was treated to an eight-month nut and bolt restoration costing £20,000, which included the recommission of its 3.5-litre V8 engine. The convertible conversion heads to The NEC Classic Motor Show Sale in superb condition, ready to be enjoyed by its next owner.

Arwel Richards, Classic Car Consignor at Silverstone Auctions spoke about the Range Rover and said, “This classic Range Rover convertible conversion is a car worthy of the modern-day James Bond, but has a story akin to that of ‘007’ too. Not only does this convertible conversion have unique provenance, but it’s based on a truly superb early right-hand drive Range Rover ‘Suffix B’ and has covered a mere 62,500 miles – I doubt you’ll find one like this in the near future.

“With the recently launched Range Rover Evoque Convertible, it has become in vogue even more. It’s a real privilege to be entrusted with re-homing this very important car at the NEC Classic Motor Show Sale and I’m sure its new owner will love and cherish it, especially after its superb restoration.”

Silverstone Auctions will also be exhibiting at Classic & Sports Car – The London Show, held at Alexandra Palace from 30 October – 1 November as auctioneers for the silent auction. The auction house will be exhibiting two cars on their stand, as well as offering on-site valuations to show visitors.

For the full list of lots in The NEC Classic Motor Show Sale, please visit:

More than 40XJ220 Jaguars came together at the Silverstone Classic Saturday (29 July), in a record-breaking reunion to mark the 25th birthday of what was once the fastest production car in the world. The dramatically-styled, mid-engined, two-seater supercar was introduced in 1992, with its top speed of 212.3mph making it Jaguar’s quickest road-going car – an accolade it still holds to this day. Staff

Aston Martin Racing has taken a double podium finish at this weekend’s 6 Hours of Silverstone, as the FIA World Endurance Championship (WEC) gets underway. The #95 GTE Pro trio of Darren Turner (GB), Marco Sørensen (DN) and Nicki Thiim (DN) enjoyed a positive afternoon at the British round of the WEC. With each driver double stinting, the #95 entry enjoyed trouble free running to achieve a strong haul of points at this early stage in the championship. Turner commented, “That was a huge change from yesterday and after starting the race in the #95 I had a good two hours in the car. The car ran perfectly and I’m both happy and encouraged by the performance of our new Dunlop tyres. With the strategy working in our favour and Nicki, Marco and I all avoiding trouble on the track, […]

One of the rarest of all flavors of the Mini Cooper S, a 970 S built in 1964 comes up for auction at the Silverstone Classic on 29th – 30th July. A fine example of the homologation special created to qualify the Cooper S for the under 1000cc category in racing and rallying, the car presented by Silverstone Auctions is one of less than a thousand ever built. With engine and chassis numbers matching logbook records and an extensive history file including homologation papers, heritage certificate, 2004 FIA Historic Technical Passport and MoT certificates, the iconic Cooper 970 S is estimated to sell for between £43,000 and £50,000. Staff