Editor’s Note: Our “expert of the auctions”, Bob Seidler, recently visited the Petersen Automotive Museum in Los Angeles and sent in this report. This was only after texting me far more photos than I can run and making me extremely jealous in the process.

For all of us car buffs out there, be sure to add the Petersen Automotive Museum to your must-see list.  Over the years, I had heard it was a pretty cool place, and I can now confirm…it is the best automotive viewing experience I‘ve ever had.  While many of us have visited museums where the cars are lined up and little ID plates tell the basic facts, The Petersen takes visitor engagement to a new level.  Lots of detail and the cars are displayed in a manner that you can walk around them.  Most are on raised platforms that really aid in photography.

The Petersen Automotive Museum is the creation of Robert E. Petersen of Petersen Publications.  While they produce magazines on many topics, we all know then as publishers of Hot Rod and Motor Trend.  Many of the cars are from his personal collection, there are many others on loan or donated by collectors and philanthropists.

As for the British influence, let’s remember The Peterson is located in Los Angeles and Petersen’s personal collection tends to the American car industry.  However, for us Anglophiles, there were two stunning vehicles from the other side of the pond.

First, how many of you are familiar with the 1925 Round Door Rolls-Royce?  Well, neither am I…it’s a 1 of 1, the only one of its kind.  While originally purchased for an American heiress, it was soon back on the continent and re-bodied in 1934 by a Belgium coachbuilder. Its round doors, sloping radiator and large fin were stunning for the day; it won the Concours d’Elegance of Cannes in 1936. 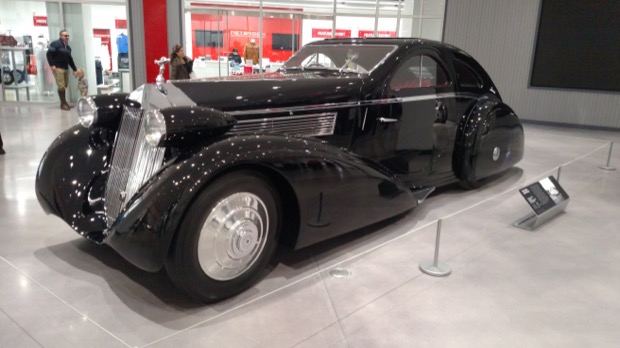 And like so many cars of the era, war and economic hardship took its toll.  It was found derelict in a New Jersey wrecking yard in the early 1950’s.  Fortunately, it was rescued and is now a star in the Petersen Collection.  What the pictures cannot fully reveal is its presence… it is a very large vehicle that belies its massive size with elegant and graceful lines.

And at the other end of the automotive scale is Steve McQueen’s stunning 1956 Jaguar XKSS, reported to be his favorite car.  And for a guy that had a virtually unlimited appetite for cars that says a lot.  Many of us know the story of the XKSS as a thinly-veiled race car and a predecessor to the beloved XKE.  McQueen was a capable mechanic and did most of his own work.  And apparently his test drives garnered him quite a reputation among the police patrolling Mulholland Drive; multiple speeding tickets in the first year of ownership nearly cost him his license.  Now I’m no Steve McQueen, but the story reminds me of my first TR3 with headers, exhaust cut-out and velocity stacks…three tickets in the first 90 days!!

Finally, just to prove that God must be British, there was a meeting of the Los Angeles MOG, which is as we all know, is the Morgan Owners Group.  As you might expect, it was a fairly eclectic group of mature men of a certain age, and the aroma of over-rich SU carburetors hung heavy in the air.  Rule Britannia!!

So while there are many reasons to visit California, be sure to add the Petersen Automotive Museum to your LA itinerary.

Business Consultant
Bob is a classic car fan and long-time British car enthusiast. His areas of expertise range from hotel and resort management to automobile auctions and car values.

Coventry Transport Museum is offering a day of fun and discovery for visitors of all ages to see the newly refurbished iconic city-centre attraction officially re-opened, with a free public show, featuring stunts and supercars, beginning at 1300hrs. If you’re looking for a fantastic FREE day out for all the family, you can’t beat Coventry Transport Museum.  In the heart of Coventry city centre, this huge Museum is home to the world’s largest collection of British road transport, and a visit whisks you away into a world of stories of real people, real passions and real hope. Petrolhead presenter duo Amanda Stretton and Harry Metcalfe will be introducing a car show that will consist of the Trailblazing Cars of the World parade and two stunt shows from supercar stuntsman Terry Grant – famous for holding over 20 stunt related World […]

The British Motor Industry Heritage Trust, based at the Heritage Motor Centre at Gaydon, Warwickshire has been awarded a Round Two grant of £1.45 million from the Heritage Lottery Fund (HLF) for its Museum Collections Centre project, it was announced today. The award is the culmination of more than 2 years work to develop plans for a new building in which to store and display more than 200 historic British cars from the collections of both the British Motor Industry Heritage Trust and its partner the Jaguar Daimler Heritage Trust. The £4 million project received initial support from HLF in 2011, and the latest HLF grant, together with match funding from Jaguar Land Rover, The Garfield Weston Foundation and both Trusts, will enable work on this exciting new project to begin in the spring of 2014. The new Museum Collection […]

World renowned, Beaulieu Autojumbles are a must visit for the motoring enthusiast in the UK. With over 2000 stands, groaning with all kinds of vintage and classic motoring ephemera – motoring parts, accessories, automobilia, literature, tools and clothing, there is something for everyone and lots of bargains to be had. This iconic event enjoys the reputation that; “if you can’t find it at Beaulieu, it doesn’t’ exist!” Our videos this week, yes we have two, are of the Beaulieu Autojumble The first is from this year’s Spring event. Whether you’re hunting for that elusive final part to complete your restoration or just want to soak up the atmosphere, join us for the Beaulieu Spring Autojumble. With thousands of stands bursting with automotive related bargains, those with a penchant for automotive eclectica and rummaging for rare parts will be in their element. From […]