With a pedigree and heritage like no other, Lotus has today unveiled two unique Celebration cars, the Exige Type 49 and 79, at the Goodwood Festival of Speed 2018 to pay homage to some of the most recognizable racers in the British brand’s history and its 70th birthday.

The Exige Type 49 and 79 Celebration cars have been handcrafted by Lotus Exclusive in a salute to Lotus’ 70th birthday, and the victory anniversaries of two historic race cars that helped define the brand as one of the all-time great automotive marques. On display and in action over all four days of the Festival of Speed weekend, with the Exige Type 49 competing in the timed supercar runs on Saturday, they’re a fitting tribute to one of the pioneering and entrepreneurial spirit of Lotus’ founder.

In 1948 Colin Chapman built his first competition car, in a small London lock-up garage, following his own theories for improved performance. He formed Lotus in 1952 and from there the company continued to innovate in both road and race engineering. Changing the very nature and intent of car design forever, Chapman was at the vanguard of a new way of thinking and his concepts are as relevant today as they were 70 years ago.

Speaking of the unveiling, and the company’s 70th anniversary, Group Lotus’ chief executive officer, Mr. Feng Qingfeng, said: “Lotus is an iconic British brand and its contribution to both the world of motorsport and development of sports car as we know them today, is undeniable. To be able to unveil our Celebration Exiges at the Goodwood Festival of Speed is truly historic, especially as the cars that inspired them are also here on display and in action. These Celebration cars are a fitting tribute to our past, but they reflect our future and show that we’re still true to our principles in building the very best luxury sports cars.”

In addition to 2018 marking the anniversary of Lotus’ birth, it’s a milestone for two historic racers. With the two one-off cars containing the marque’s DNA, the Exige Type 49 marks the 50 years since Graham Hill clinched both the Drivers’ and Constructors’ World Championship in the Lotus Type 49. The Exige Type 79 salutes the 40 years since Mario Andretti won his World Championship, and Lotus the Constructors’ Championship, in the Lotus Type 79.

The Type 49 and 79 are just two of the cars that helped forge Lotus’ reputation in competition. In Formula 1 alone it has more than 475 Grand Prix starts, complete with 79 victories and 7 World Championships. As well as the laurels gained in Grand prix racing, Lotus has successfully competed in Rally, Le Mans, Indy and saloon car classes around the world. 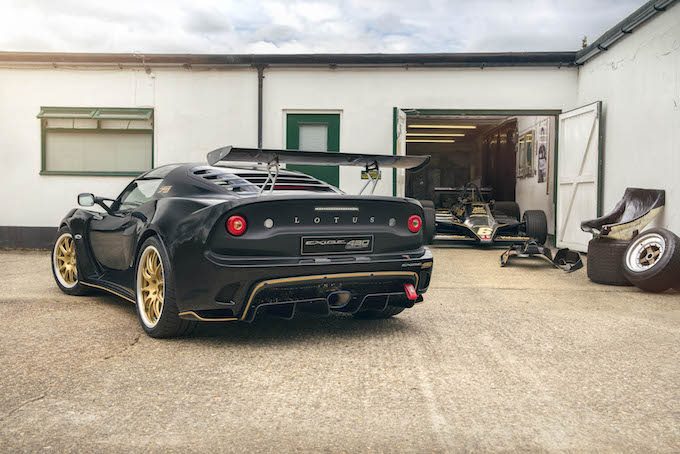 A Celebration of Cups

Far from being just for show, the Exige Type 49 and 79 Celebration cars by Lotus Exclusive pack phenomenal performance into one of the all-time great chassis designs. Based on the wildest ever incarnation of the Exige the Cup 430, the Type 49 and 79 set the fastest lap time for a road car around Lotus’ hallowed Hethel test track, covering the 2.2 miles in just 1 minute 24.8 seconds. Showing its potential, the Exige Type 49 is taking to the Hill for the Festival weekend, with demonstration runs over all four days and a sprint against the clock in the timed Supercar run on Saturday afternoon.

As the leader in lightweight sports cars, the Type 49 and 79 maximize the benefits of the latest technologies and advanced materials to weight just 1,056 kg in their lightest configuration, bestowing the Celebration cars with a power to weight of 407 hp/tonne. In addition to cutting mass, the carbon composite body panels also deliver the cars’ distinctive styling and aerodynamic setup. The high-gloss visible weave components include the front splitter, front clam, air blades, unique bargeboards, roof panel, rear tailgate, straight-cut wing and diffuser surround.

Aerodynamically evolved, the cars deploy up to 220 kg of downforce through the careful management of airflow under and over the car. Air curtain elements and louvers in the front clam panel efficiently regulate turbulence and drag, and reduce pressure within the front wheel arches, increasing downforce. The cut-out sections behind the rear wheels also reduce wheel arch pressure, while the high mounted straight rear wing and rear diffuser plant the cars to maximize traction and stability at high speeds.

A Celebration of Lotus Exclusive

Developed by the in-house Design team, the Exclusive scheme has been conceived to inspire customers to further personalize the character of their Lotus cars. With the ability to tailor vehicles to their taste, it provides an alluring alternative to an off-the-peg sports car – covering everything from color coding through to race car preparation. Establishing itself with new buyers, roughly one-third of all new Lotus cars built feature some form of personalization.

Both the one-off Celebration Exige Type 49 and 79 appearing a Goodwood Festival of Speed have been curated by Lotus Exclusive to provide a bespoke yet tasteful interpretation of the marque’s two iconic race cars. Inspired by the famous racing colors schemes of their namesakes, they connect the brand to its past but anchor it to the present, with the formidable Exige Cup 430.

Inside, each cars’ racing colors are referenced, with Lotus’ in-house manufactured carbon race seats trimmed in black Alcantara®, and finished with color-keyed red and gold, or black and gold, contrast double stitching. This is echoed by the door panels and face-level vents, transmission console, and complemented by the cabin’s anodized aluminum and carbon fiber elements – including door sills and an instrument binnacle cover. Topping off Lotus’ acclaimed open-gate manual gearbox, designed specifically for fast and fluid shifts, is a wooden gear knob.

With every single Lotus Sports hand built by a team of skilled craftsmen and women, the Lotus Exclusive scheme draws on the collective to create something exceptional for the customer. Including everything from non-standard paint colors, stand-out roof panels, tasteful color decals, as well as contrast brake calipers, the same level of attention can be centered on the cabin, with bespoke upholstery and finish options available.

Lotus Exclusive is available on all Lotus cars, from the entry-level Elise to the range-topping Evora, with a full range of performance options making it truly made to measure.

A Celebration of Champions – the Lotus Type 49 and 79

As two cars that cleared the field before them and dominated the sport, the Lotus Type 49 and 79 F1 single seaters are as memorable for their design and colors schemes as they are for their race victories. Part of Lotus’ unrivaled motorsport legacy, they are exemplars or the brand DNA as defined by company founder Colin Chapman.

Designed to accommodate the new Cosworth DFV engine, the Lotus Type 49 won its first race with Jim Clark at the wheel in Zandvoort 1967. The following year, resplendent in the Gold Leaf colors, it powered Graham Hill to his second World Championship, and Lotus to the Constructors’ Championship, and It continued to win races until 1970. Its four-year reign at the front of the grid marks the Lotus 49 as one of the most significant racing cars of all time.

Equally as inspiring, the Lotus 79 is regarded as one of the most visually stunning F1 cars ever built – especially in the John Player Special livery. With the underside of the car designed as an inverted wing, the resulting reduction in air pressure beneath the body dramatically boosted aerodynamic downforce. In the 1978 season, the Lotus Type 79 proved almost unbeatable, helping Mario Andretti to the F1 Drivers’ Championship and Lotus to the Constructors’ Championship.

Lotus is proudly celebrating its 70th anniversary at the Goodwood Festival of Speed 2018 as an Automotive Partner of the event. This year’s Festival will allow visitors to see some outstanding cars from the marques’ past running the Hill. This includes Jim Clark’s World Championship winning Lotus 25, Graham Hill’s World Championship winning Lotus 49, Ayrton Senna’s first F1 race-winning car, the Lotus 97T, and the revolutionary Lotus Type 56 gas turbine Indycar.

Acting as the center of the celebrations, Lotus’ current line-up of sports cars will be proudly displayed on the company’s stand in the main exhibitors’ space. This includes the Celebration Exige Type 79, which is appearing with a Type 79 racing car campaigned by Mario Andretti as part of his Championship winning year.

Heralding a new generation of Lotus high performance sports cars, Friday saw the unveiling of the company’s quickest and most expensive series production car ever, the 3-Eleven, at the 2015 Goodwood Festival of Speed. Designed as an uncompromised manifestation of the Lotus spirit, the new car is focused on providing an undiluted driving experience, and underlines the company’s ability to deliver legendary handling and blistering speed. Working on the concept of less is more, and keeping close to Lotus’ track roots, the dramatic new vehicle features an all-new lightweight body, with an open cockpit design and a revised V6 supercharged engine developing 450 hp. Two variations of the Lotus 3-Eleven will be available: Road and Race; both delivering an impressive combination of high performance, agility and precision. Based on the Road version, the Race includes a more aggressive aero kit, […]

With just two weeks to go until Goodwood Festival of Speed 2018, MINI UK is excited to confirm two concept vehicles making their UK debut. MINI will offer a glimpse into the future direction of the brand with the MINI Electric Concept showcasing its design vision for a fully-electric model. Also a UK first, and inspired by the carmaker’s legendary motorsport heritage, the MINI John Cooper Works GP Concept will be on display as part of MINI’s activation at the 2018 festival. The MINI Electric Concept features an iconic design with clean-cut surfaces for a minimalist impression and will be the first fully electric MINI. The concept offers a thrilling preview of the all-electric production vehicle due to be unveiled in 2019. Staff

Caterham has unveiled the new, limited edition Seven SuperSprint at this weekend’s Goodwood Revival as part of its 60th-anniversary celebrations. Reflecting the anniversary, 60 SuperSprints destined for the UK and European markets go on sale today, completing the pair of special models that have topped and tailed the anniversary year. The similarly retro Seven Sprint was launched at the same event 12 months ago, with all 60 cars sold within a week, quickly becoming the fastest selling Caterham Seven to date. Staff