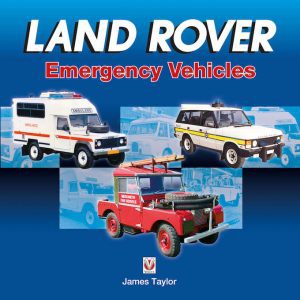 and nostalgic look at the role of the Land Rover in the emergency services over the last 70 years. Land Rover products have been used by the emergency services almost from the moment the first model left the factory in 1948. The agility and size of these vehicles made them an immediate hit with fire services, where they initially became popular as factory fire tenders. Police forces were also attracted by the cross-country ability and versatility of Land Rovers, especially outside Britain, and, when long-wheelbase models provided extra space, they also became favorites for ambulance conversions.

Some emergency-service conversions required very little adaptation and were carried out in the workshops of the end-users. Others – such as six-wheel Range Rover fire tenders – required major alterations from the factory-standard vehicle. Meanwhile, specialist companies developed dedicated ambulance and fire tender bodywork, creating a fascinating variety of body types.

The vehicles featured in this book illustrate the versatility and adaptability of Land Rovers and their more modern SUV siblings.

This book will interest Land Rover enthusiasts and emergency-vehicle enthusiasts alike, with evocative photographs that illustrate both historic vehicles and more recent vehicles in action.

The author, James Taylor, has now written well over 100 books in all, and among them have been several definitive one-make or one-model titles. He has also written for enthusiast magazines in several countries, has translated books from foreign languages, and even delivers effective writing training in both the public and private sectors. He spent the best part of ten years as the editor of Land Rover Enthusiast magazine and has always counted the products of the old Rover Company and of Land Rover as his favorite subject.

After the summer break, Defender Challenge by Bowler returns this weekend for its fourth round as nine teams battle it out at the Trackrod Rally, part of the annual Rally Yorkshire event. Based at Pickering Showground, the course takes in 53 miles of rally stages that twist through the spectacular Yorkshire countryside over two days and opening with the daunting prospect of challenging night stages. The FIA-approved Land Rover Defender 90 Hard Tops are modified by Bowler Motorsport specifically for rally competitions. Engines are tuned to 170bhp and 450Nm of torque and the suspension system features uprated dampers and roll bars. Lighter wheels, a full roll-cage and rally safety features complete the specification. This weekend, a number of Land Rover employees and apprentices join the Bowler technical teams to support the rally. In addition to their ‘day jobs’, enthusiasts from […]

Land Rover has created a special collector’s Defender pedal car concept, previewing a full production pedal car model that will go on sale in Spring 2016. With production of current Defender now in its final phase, the unique pedal car concept represents a fitting tribute to the one of the world’s most iconic vehicles; the Series Land Rover and Defender has been produced in Solihull, UK, since 1948. The exclusive Defender pedal car is hand built in the UK and styled to commemorate the legacy of the first-ever pre-production Land Rover affectionately know as ‘Huey’ given its original numberplate of ‘HUE 166’. The concept model is constructed using a rolled–edge aluminium frame complete with individual chassis number and personalised numberplate. It is hand finished in the same Loire Blue found on the full-scale Defender colour palette. The show car is […]

Land Rover announced today that the new Land Rover Defender has been named the winner of MotorTrend’s 2021 “Golden Calipers” for SUV of the Year. […]