A convoy of 70 rare and important Land Rovers stole the show at Goodwood Festival of Speed yesterday as part of a record parade up the famous Goodwood Hill, celebrating 70 years of Land Rover.

The largest ever batch of vehicles to drive up the famous hill were led by a recreation of the very first Land Rover – a Centre Steer prototype – and ‘HUE 166’, the first Series I pre-production prototype from 1948. The Series I was such a success that it spawned the Series II and Series III, an example of which became the millionth Land Rover sold just 28 years after the very first prototype. That millionth car also appeared in the parade, as part of a group of 25 early Series I, II and III vehicles including fire engines, SAS vehicles, aircraft crash rescue and African expedition heroes – demonstrating the breadth of versatility of Land Rover over the years.

All four generations of Range Rover featured in the convoy, including a Trans-Americas Expedition example which crossed the all-but-impassable Darien Gap in 1971 and a 2004 example used by Cheshire Police. Also present was Land Rover’s Discovery nameplate showcased with an example of each of the five generations, including a round-the-world expedition car, the first Discovery ever built and the millionth Discovery to roll off the line. 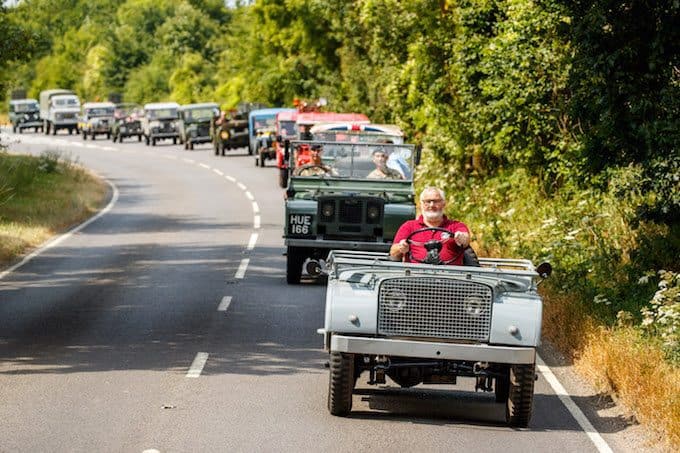 As we continue to celebrate Land Rover’s 70th Anniversary throughout 2018, today was a real highlight. The vast breadth of vehicles here from fire engines, tow trucks, to expedition vehicles demonstrated the capability that is core to Land Rover name.

I would like to express our gratitude to all the owners, collectors and enthusiasts who joined us today.

The full list of Land Rover models which took part:

TVR, the iconic British sports car maker, has announced that it will be unveiling its long awaited new sports car to the public at the Goodwood Revival on 8-10 September 2017. Created in conjunction with Gordon Murray Design, the 1200 kg car promises incredible 200mph performance and 0-60mph in less than 4 seconds. With the special launch edition car being offered at under £90,000, anticipation and demand for the 400BHP per ton, five-litre, Cosworth developed V8-powered car is already at fever-pitch. Staff

Caterham has revived the spirit of one of its most illustrious Sevens – the boisterous 1.6-litre Seven Superlight – with the launch of a new special edition model. Just 20 of the special edition cars – launched at this weekend’s Goodwood Revival ahead of the 20th anniversary of the original Superlight in 1996 – will be built. The original Superlight’s production run ceased in 2004, but it heralded a new era of purposeful, track-biased Sevens designed to offer even more performance and low weight at a pared down price point. Despite its ultra-minimalist character – even for a Seven – the Superlight went on to become one of Caterham’s most coveted models, selling some 200 examples while in production. Priced at £29,995*, and sporting a similarly extreme spec sheet to that of the original, the Superlight Twenty receives a 135bhp […]

A significant anniversary requires a significant car and, Lotus is marking 50 years since the founding of its famous factory with a limited Hethel Edition of its benchmark Evora 400. Available in three exclusive colours, with matching trim options and a special commemorative build plate, the Hethel Edition Evora 400 combines high performance with Lotus’ legendary chassis development. Winning the praise of customers and the motoring press since its launch, the Evora 400 weighs in at just 1,395 kg and epitomises Lotus’ approach to efficient engineering. The Hethel Edition Evora 400 is the first in a series of special products and events marking this important milestone in the company’s history, when, in 1966, founder Colin Chapman moved Lotus to the purpose-built facility in Hethel, Norfolk. Staff