MINI has released a pair of detail design sketches as an early preview of the brand’s first fully-electric production model, which is set to make its debut in 2019. The first sketches of the production model coincide with the MINI Electric Concept making its UK debut at Goodwood Festival of Speed 2018.

Following on from the MINI E pilot project exactly ten years ago and the MINI Cooper S E Countryman ALL4 plug-in hybrid model on sale since 2017, the first fully-electric MINI represents the next stage in the electrification of the MINI brand and reflects the BMW Group’s NUMBER ONE > NEXT strategy.

MINI is an urban brand and the fully-electric MINI the logical next step into the future. These initial sketches for the fully electrified MINI outline our vision of authentic design creating a bridge between the history of the brand and its electric future.
— Oliver Heilmer, Head of MINI Design 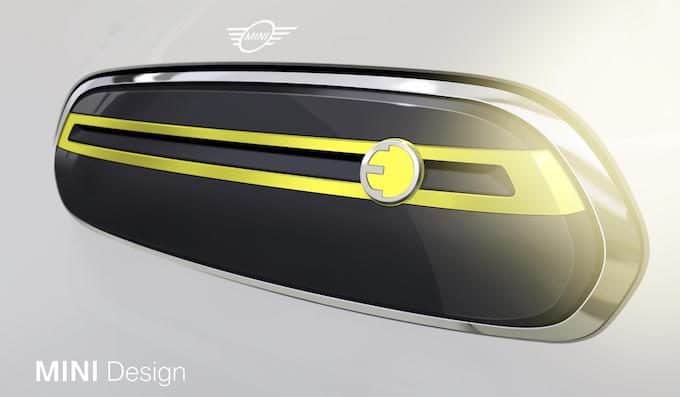 Combining the past and the future

The sketches show the car’s grille. Its hexagonal form is a signature MINI design element, but the closed-off interpretation is all new. Behind the grille, cooling elements are conspicuous by their absence – which means the grille can stay closed and therefore improve airflow. A yellow accent bar with an E badge in the same color produces a powerful contrasting effect and identifies this as an electric MINI. The second sketch shows the striking wheel design of the fully-electric MINI, which has been carried over from the MINI Electric Concept – unveiled for the first time last year – into the production model. The wheels take the motif of the accent bar on the radiator grille and add their own asymmetrical twist.

The BMW Group announced the development of a battery electric MINI production vehicle in July 2017. The first of these large-scale produced MINIs with battery-electric drivetrains will be available from 2019 – exactly 60 years after the launch of the classic Mini.

This model will ensure that electro-mobility is delivered in a way unique to the MINI brand with driving fun, style, and individualization at its core. The electric drivetrain will be built at the BMW Group’s e-mobility center at Plants Dingolfing and Landshut in Bavaria before being integrated into the car at Plant Oxford, which is the main production location for the MINI 3-Door Hatch.

October 19, 2018 Michael Carnell Video of the Week, Articles, Highlights, Racing and Competition Comments Off on VotW – Sport on Wheels, Goodwood 1948

For our Video of the Week, let’s turn the clock all the way back 70 years to 1948 at Goodwood and one of the first regular races in Britain after the war. In this film from British Pathé we get to see the first race on the road racing course of what was before then the perimeter of an RAF airfield. This race was organized by the Junior Car Club and sanctioned by the Duke of Richmond and Gordon. The winner of the first race was P. de F. C. Pycroft, in his 2,664 c.c. Pycroft-Jaguar, at 66.42 m.p.h. Stirling Moss won the 500cc race (later to become Formula 3), followed by Eric Brandon and “Curly” Dryden, all in Coopers. Goodwood became famous for its Glover Trophy non-championship Formula One race, Goodwood Nine Hours sports car endurance races run in 1952, 1953 and […]

James Bond is set to go electric as luxury British sports car maker Aston Martin took the wraps off a new hybrid beefed-up coupe. Codenamed DBX, the two-door 4×4 grand tourer aimed at wealthy families was a surprise unveiling at the Geneva Motor Show, where the world’s car bosses are meeting. Although the car unveiled is an all-electric 4×4 with four separate motors at each wheel, Aston Martin’s final production version is set to be a four-door hybrid petrol-electric hatchback crossover. This is aimed more at Mr and Mrs Bond and their children than the suave superspy alone. It is set to hit showrooms within three years priced at around £160,000 with the aim of widening the brand’s appeal to a much wider audience. It comes as a specially created DB10 car appears in the new 007 movie SPECTRE now […]

Only 140 Goodwood MINIs to be Sold in USA

June 18, 2011 Staff Corporate Business, New Cars Comments Off on Only 140 Goodwood MINIs to be Sold in USA

The Mini, inspired by Goodwood, is an exclusive special edition that adds another layer to the MINI brand experience with a generous dose of automotive luxury and exclusivity in its highest form. The MINI, will have only 140 vehicles coming to the United States. The Goodwood MINI has had a close collaboration with the Rolls-Royce Motor Cars design team at the development center of Rolls-Royce in Goodwood, England, and has produced a limited-run special edition MINI, whose exterior and interior design is inspired by fine materials and the British luxury car marque’s commitment to absolutely flawless workmanship. “The Mini, inspired by Goodwood is a limited edition model that will combine typical Mini driving fun with discerning craftsmanship,” said Darren Richie, Irvine, Calif., Mini’s General Manager. “We’re excited for its arrival to the U.S and we’re excited to see our Mini […]