Update: The contest is now closed! We would like to congratulate Ray Whitley on his win which was determined at random from all entries received. We would also like to thank all of those who entered the contest. Entertaining stuff!

I bet you didn’t know that July is my birthday month – well it is. But, I am going to give you the present. Aren’t I generous? We Leo’s are like that!  S 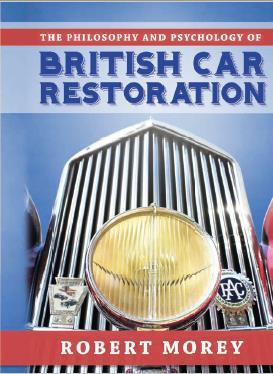 ince this book is proving to be so popular, I thought you might like another contest chance to win a copy of Robert Morey’s Philosophy and Psychology of British Car Restoration. This is a great little book, and a fun read for any fan of old British cars.

So, you might be asking yourself how you enter the contest. I gave a lot of thought to that and decided that it would be fun to have something that kind of goes along with the book. At the same time, I would like to know more about you. So to enter the contest, please leave a comment below and briefly tell us a funny, troubling, or otherwise enlighting moment from your car repair past. The culprit doesn’t have to be you, maybe the story will involve a friend or someone working on one of your cars.

What kind of story are we talking about? How about the time a member of a racing crew went to drill a small hole in the fender of a race car and drilled all the way through the fender and on into the tire? Or how about the time that a friend of mine decided to help me pull the steering wheel off my MGB and proceeded to yank the entire steering column out?

Or there is the really good friend who went to grab his beer while doing a brake job. He grabbed the wrong bottle and took a big ole swig of dirty Castrol LMA that he had been bleeding into a used beer bottle. Lesson? Always look before you drink, and never bleed brakes into a standard drinking container. Maybe keep poison control’s number handy?

You get the idea. Let’s hear your stories. Funny, sad, or “duh” moments, it doesn’t matter.

The winner will be chosen at random next Friday, August 4, and announced in that day’s issue of Just British.  Remember that if you want to just go ahead and buy the book, you can pick up copies on Amazon or on Robert’s website.

As always, decisions of the judges are final, one entry per subscriber, by entering you are agreeing to be a subscriber if you aren’t already (lame), no quarreling about the outcome, and blah, blah, blah. You must leave a comment and use a real email address!

The prize will be shipped out to the winner as soon as they confirm our message to them at the end of the contest. No country limits or any of that foolishness – we will ship the book to the winner wherever they may be.

Winner – Show Us Your Sticker Contest

Just a quick post to announce the lucky winner of our Show Us You Sticker contest. And the winner is … John Huber of Maryland!  As you will remember, the prize for this contest was a Meguiar’s Complete Car Care Kit. This should serve to get your ride shining for those Fall shows. I have used most, if not all, of the products in this kit and can personally attest to the quality. Though from the picture he sent, it looks like John’s B is already quite the shiner. In addition to that fine Just British Online Motoring Magazine sticker, check out the other bumper sticker. Love it! And even better than that, well to me anyway, check out that license plate. Must admit that I am quite jealous of that one. Honestly, I love getting these pictures and hearing the […]

Summer Contest – Show Us Your Sticker

June 24, 2016 Michael Carnell Highlights Comments Off on Summer Contest – Show Us Your Sticker

Note: The contest is now closed and a winner chosen. Thanks to all those who competed. And you can still have your car and sticker featured in our gallery, so keep sending them in. Thanks! The summer contest is finally here, so you need to show us your sticker!  Yup, that’s right, to enter this contest all you have to do is show us your Just British sticker (you do have one, right?) as it is attached to your car, motorcycle, motorhome, space shuttle, cooler, significant-other, or … well, just keep it at least PG rated.  We love seeing our stickers on your cars out on the road and at shows, and so this is a chance for you to show off online. To enter, just do one of the following things …. Upload a picture of your applied sticker […]

Win a Copy of Philosophy and Psychology of British Car Restoration

Congratulations to our winner! We would like to congratulate Bruce Cunha on his win of the book. Bruce, and you can read his comment below, drives an MG BGT as his everyday ride, which is great! Says his wife drives an SUV, and he has an MG TD under restoration. Sounds like a pretty good way to go. Look for our next contest coming soon. We haven’t had a competition for a while, and it is time to change that. What’s more, we would like to give some lucky ready out there a chance to own a copy of Robert Morey’s Philosophy and Psychology of British Car Restoration. You have heard us talk about the book, and you may have even read Bob Seidler’s excellent review, so now it is time for us to part with a copy and send it […]