The Aston Martin DB10 – the first car created exclusively for James Bond by British luxury brand Aston Martin – is to go under the auctioneer’s gavel at the London auction house of Christie’s on 18th February with proceeds donated to Médecins Sans Frontières. 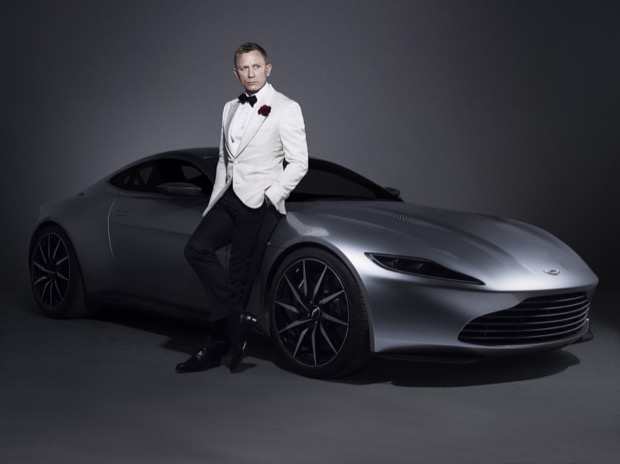 ‘Spectre – The Auction’ celebrates the release of the 24th Bond film on Digital HD, Blu-ray™ and DVD with 24 special auction lots going under the hammer for charity, led by the Aston Martin DB10.

Celebrating the great British brand’s half century with Bond, which started with the iconic DB5, the DB10 gives a glimpse of the future design direction for the next generation of Aston Martins. Production of the DB10 was strictly limited to ten examples of the bespoke sports car which was developed and hand-built by the designers, engineers and artisan craftspeople at Aston Martin’s Gaydon headquarters in the UK for the latest Bond film, Spectre.

As part of the painstaking procedure of examination and authentication, the DB10 has undergone a digital scan which has been verified and held in a secure archive for future reference.

The DB10 features a 4.7-litre V8 petrol engine and six-speed manual gearbox. It has an estimated top speed of around 190 mph.  The car features an all carbon fibre exterior, while the interior has been painstakingly handmade using fine luxury leathers, carbon fibre and aluminium.

Most of the DB10s were modified for use in the filming of Spectre, but the DB10 offered at Christie’s is one of only two “show” cars, which were left unmodified and used for display purposes. This DB10 took pride of place at the world premiere of Spectre at the Royal Albert Hall in London and has been signed by James Bond himself, Daniel Craig. The auction will take place on 18th February at Christie’s King Street auction house in London.

To register for this once in a life time opportunity, please visit [email protected]. Further information about the auction can also be found at www.christies.com/bond.

The car is sold as a collector’s item. It is an original Aston Martin DB10, and was built to be capable of specific uses by trained drivers in a controlled environment for filming. The car is not homologated, certified or approved for use on any public roads and has not undergone the testing processes used for production cars, including but not limited to occupant safety, crash testing, durability and/or emissions of aftersales maintenance regimes.

The car is sold without any warranty of any kind and is subject to Paragraph E of Christie’s Conditions of Sale within the relevant sale catalogue. Intellectual vehicle rights arising in connection with the car belong to Aston Martin Lagonda Limited, including, without limitation, its designs, trademarks and copyright.

James Bond is set to go electric as luxury British sports car maker Aston Martin took the wraps off a new hybrid beefed-up coupe. Codenamed DBX, the two-door 4×4 grand tourer aimed at wealthy families was a surprise unveiling at the Geneva Motor Show, where the world’s car bosses are meeting. Although the car unveiled is an all-electric 4×4 with four separate motors at each wheel, Aston Martin’s final production version is set to be a four-door hybrid petrol-electric hatchback crossover. This is aimed more at Mr and Mrs Bond and their children than the suave superspy alone. It is set to hit showrooms within three years priced at around £160,000 with the aim of widening the brand’s appeal to a much wider audience. It comes as a specially created DB10 car appears in the new 007 movie SPECTRE now […]

For more than half a century Aston Martin has been the sports car of choice for the world’s most famous spy, James Bond. Now, the luxury British brand is celebrating the release of Spectre with the launch of the strictly limited DB9 GT Bond Edition. Limited to 150 examples worldwide, the highly desirable model is based on the recently launched DB9 GT. Designed to offer the best of what DB9 can be, the DB9 GT delivers world-class grand touring and hand-built excellence. Building on these exceptional foundations, the new Aston Martin DB9 GT Bond Edition adds even greater levels of exclusivity by virtue of its limited edition build run along with a host of carefully considered trim, equipment and accessory additions that celebrate the brand’s more than 50-year association with the famous film franchise. Subtle styling additions The DB9 GT […]

Founded in 1913 by Robert Bamford and Lionel Martin as ‘Bamford & Martin Ltd’, Aston Martin has developed into an iconic brand synonymous with luxury and elegance. 1914 saw the birth of the name ‘Aston Martin’ following one of Lionel Martin’s successful runs at the Aston Hill Climb in Buckinghamshire, England. Within a year, the first Aston Martin had been built and registered with the name, and an icon of the automotive world was born. Obviously, our Video of the Week this time around focuses on the iconic favorite of James Bond, Aston Martin and the DB range in particular. The DB9 is a true automotive icon. A badge and bloodline which represents all that is great about Aston Martin – and British supercars in general. Each Friday during January 2014 Aston Martin released an exclusive film exploring the design, engineering, […]