In one of the most thrilling championship battles in the history of the competitive class, the pair have been scrapping all season long, but it is Robinson who leads going into the race weekend at the famous Kent circuit.

The R300-S Championship is the pinnacle of Caterham’s domestic motorsport programme, which features five series, starting with the entry-level Caterham Academy, which is where Robinson started his racing career.

With just six points separating the pair going into the ninth round of this season’s 14 rounds, the all-important races on the iconic Brands Hatch Grand Prix track will further indicate whether Head can claim a double title or whether Robinson can pip him to the post.

Head, who has a background in karting from the age of 13, has been racing Sevens for four years; he started by purchasing a Caterham Academy car and upgrading it to race in the Caterham Roadsport category, where he finished the 2011 season in fifth place, before graduating through the ranks to the Supersport series, which he won in 2012 in just six rounds. Once behind the wheel of his R300 racer, equipped with ZZR tyres and a sequential gear box, Head soon blazed his way to victory in the Superlight R300-S series.

Starting his Caterham racing career in the Academy, Robinson raced his first Seven in 2011, finishing third. Robinson caught the Caterham bug and moved up to the Tracksport series, where he took the title with nine podium finishes in 2012. It was then onto the Supersport series, where Robinson secured another title before taking on the mighty R300s.

The Caterham Superlight R300-S Championship has been at the top of Caterham’s motorsport programme since its inaugural race in 2009. Widely regarded as the most exciting single-make race series in Europe, the R300s offer hard-core racers the ultimate in lightweight sportscar competition thanks to the R300’s extreme race set-up, 2.0 litre, 175bhp Ford Duratec engine and Sadev six-speed sequential gearboxes, which allows clutchless up-shifts for fast, precise gear changes.

With popularity in the UK at a record high, the race series is growing across the globe; Caterham has recently launched R300-S Championship as far afield as Taiwan and Colombia. 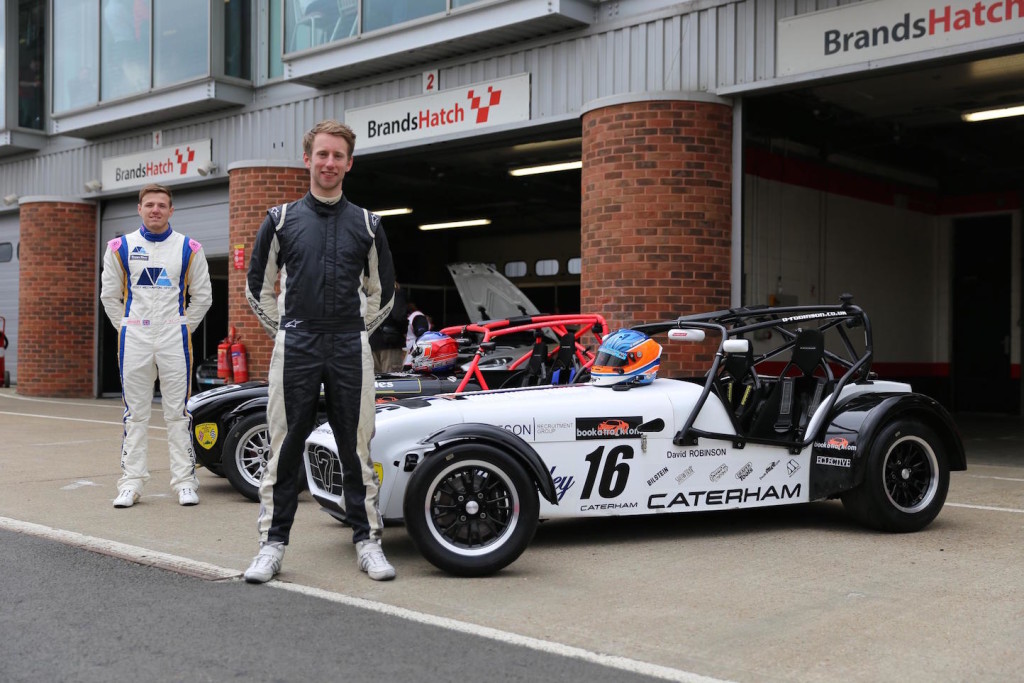 Simon Lambert, Chief Technical and Motorsport Officer at Caterham Cars, said: “We can’t wait to see this weekend’s race. Brands Hatch GP is a great circuit for both the drivers and spectators. To have such talented racers in this year’s R300-S Championship season is tremendous. Dave and Aaron are both veteran Seven drivers now with extensive racing experience. The R300-S Championship really represents the unique experience that Seven racing provides and these drivers are at the top of their game when it comes to handling a Caterham on the track. It’s going to be a great race.”

On August 1/2, the fifth round of the BookaTrack.com Caterham Superlight R300-S Championship will be held as part of the prestigious Avon Tyres British GT Championship weekend. The race will be broadcasted live on Motors TV.

The British sportscar maker offers a championship ladder to suit drivers of all abilities; from the novice ‘Academy’ series, drivers are given the support and opportunity to work their way up to ‘Roadsport’, then ‘Tracksport’ and then ‘Supersport’ with only minor upgrades to their cars required.

For more information on how to get a foot on the Caterham motorsport ladder, click here: http://uk.caterhamcars.com/motorsport

Burlen Ltd, the world’s only manufacturer of genuine SU (Skinner’s Union), AMAL and Zenith carburetors, is gearing up to promote the flagship race of the Brands Hatch Mini Festival at the iconic race track in Kent. The Salisbury-based company is promoting the Historic Mini Races at the event, which will be named ‘The SU Carburetters Cup for Pre-66 Minis’ in the eagerly anticipated 2017 edition. Staff

Caterham Cars is entering the UK’s most prestigious eco-driving event, the MPG Marathon, for the first time in a two seater sports cars billed as the manufacturer’s ‘most frugal ever’. The British sportscar maker will be entering the entry level version of the iconic Caterham Seven, the 160, rated as the most economical in the company’s history and the most cost-effective two-seater sportscar on the market. The 160 is powered by a super-compact, turbocharged three-cylinder Suzuki engine, which enables it to achieve an impressive 57.6mpg, emit just 114g/km CO2 and yet reach 0 – 62mph in a blistering 6.5 seconds. “We are delighted that Caterham Cars is entering the MPG Marathon, the UK’s leading lean driving challenge, for the first time,” said organiser Jerry Ramsdale, publishing director of Fleet World. “We will be very interested to see how it compares against […]

Caterham Returning to Formula One

November 7, 2014 Staff Caterham, Highlights, Racing and Competition Comments Off on Caterham Returning to Formula One

Caterham is preparing to return to Formula One for the 2014 finale in Abu Dhabi next month according to AutoWeek. As it was put into administration following founder Tony Fernandes’ ill-fated sale to Colin Kolles-managed investors, the team as well as backmarker Marussia sat out Austin and will again be absent in rainy Brazil this weekend. But it then emerged on Wednesday that Caterham’s administrators, led by Finbarr O’Connell, have lodged an official team entry for the 2015 season. Marussia, now renamed to the operating company Manor, is also on the provisional FIA entry list. But reports that Caterham and Marussia have paid the $500,000 entry fee already are wide of the mark. That fee is not due until late November. O’Connell, however, who now runs Caterham, said it was imperative to lodge a 2015 entry so that the team […]