An amazing collection of British classics including a 1968 Triumph TR5, a 1975 Bristol 411 Series 4, a 1971 Jaguar E-Type Series III V12 Roadster and a 1933 MG J2 Midget will head to auction at the CCA September Sale at the Warwickshire Event Centre on 15th September.

An incredible 1968 Triumph TR5 on offer at the September Sale is undoubtedly one of the best in the country, following a painstakingly millimeter-perfect rebuild on a brand new factory spec chassis. The six-cylinder 2.5-litre engine has been fully rebuilt, including a new head suitable for use with unleaded fuel, and a full tune-up to give maximum performance. The bodywork has been completely rebuilt with new inner and outer sills along with a multi-coat repaint in a wonderful shade of Signal Red. Along with the repaint the TR5 comes with a brand new Mohair hood, tonneau cover, and brand new chrome wire wheels. Purchased by the seller three years ago it comes to auction with an estimate of £50,000 to £60,000.

We have always had a particular talent for sports cars here in Britain. Despite the traditional British weather we have always had a love for the classic two-door convertible sports car, even going back before the war. The number of cars from Britain that have reached true classic status is staggering, we are lucky enough to offer many of them at our auctions. This selection from the September Sale is certainly one of the best.
— Richard Greenhalgh, classic car specialist at CCA

Also included in the sale is a brilliant 1975 Bristol 411 Series 4. Estimated at £28,000 to £32,000, it comes with an incredible 6.5 liter Chrysler V8. First registered on 1st March 1975 to the Bristol Tool Selection Company, this 411 Series 4 boasts a full service history with Bristol Cars and Spencer Lane Jones. The car had a body off restoration and repaint in 1991, with the engine fully rebuilt at 110,000 miles having a new Edelbrock carburetor fitted, the cooling system upgraded and the ignition system renewed. Finished in Black over Tidal Sand Gold with a Black Connelly hide leather interior, this Bristol is a very special pampered car.

One of four E-Types in the sale, this 1971 Jaguar E-Type Series III V12 Roadster offered at the sale originally left the factory as a coupe before being converted to a roadster by Leaping Cats Ltd. Undergoing a full nut and bolt restoration in 1999, the big cat has only covered 1,783 miles since. The engine was rebuilt at that time and was converted for unleaded fuel. Coming with a fantastic set of stainless steel wire wheels and a straight through stainless steel exhaust system, the E-Type has been given an estimate of £45,000 to £50,000.

Traditional British craftsmanship has always been some of the best in the world. Our love of cars spreads from the fantastic city cars of Mini and Morris through the sports cars of MG and Triumph all the way up to the ostentatious luxury of Bentley and Rolls-Royce. There’s a reason our brands are known around the world and it’s a pleasure to offer this selection at the September Sale. 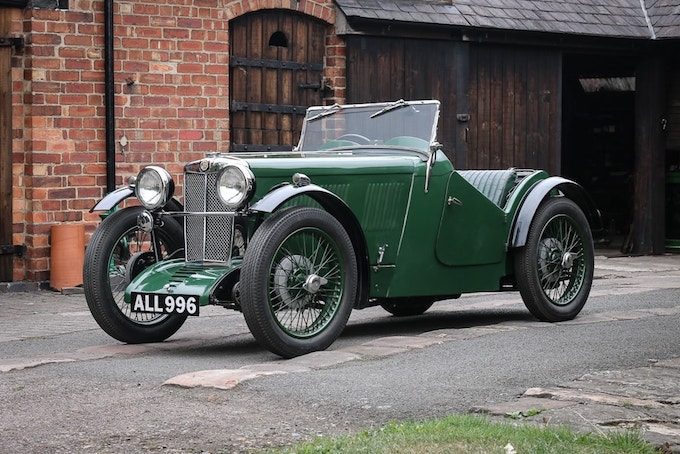 A fantastic 1933 MG J2 Midget will also be on offer, estimated at £20,000 to £25,000, the pre-war car is coming from a 20-year ownership after a sympathetic restoration. The restoration consisted of a full body off respray during which, the chassis was shot blasted before being rebuilt and repainted. Boasting 36bhp from an 847cc incline four cylinders, the car is finished in the traditional shade of British Racing Green with the interior retaining its well-earned patina built up over many, many years.

From “Men and Motors” we have the very first Triumph TR5 off the production line brought along to the Classic & Sports Car Show by Nick Goldthorpe from ‘Classic Motor Cars Ltd’.  Yes, the very first one, and a beautiful survivor. The TR5 was little more than a one year only car, very late 1967 to 1968, and was really just a stopgap between the aging TR4 and not quite ready TR6. As such, it had the body styling of the former car and the six-cylinder engine of the latter. In the UK the car was petrol injected while in the USA it was carburetted and known as the TR250. Seems our US regulations couldn’t quite handle the fuel injection – or maybe it was the other way around. These TRs have gone up dramatically in price recently, leading me […]

VotW – The First 25 Years of the Triumph TR Series

February 24, 2016 Michael Carnell Articles, Classic Cars, Triumph, Video of the Week Comments Off on VotW – The First 25 Years of the Triumph TR Series

I swear I am not neglecting Triumph. I love Triumphs! I have had quite a few and even own a 1978 Spitfire at the moment. So, for our Video of the Week (VotW) let’s turn our attention to the Triumph TRs. The Triumph Story is a bit soft in the sound department, but this history of the maker of is definitely worth the watch. […]

A 1992 Lotus Esprit Turbo SE ‘High Wing’, one of just two original factory press cars, will be auctioned at Classic Car Auctions’ (CCA) June Sale on Saturday 18th June, at the Warwickshire Exhibition Centre, Leamington Spa. In the year that Lotus celebrates the 40th anniversary of the Esprit, this car is the perfect opportunity to acquire an important example of the iconic model. This rare ‘High Wing’ variant, which appeared on the front covers of motoring magazines in the early 1990s and at various motor shows at the time of the model’s launch, will be offered for sale with an estimate of between £22,000 and £26,000. Staff