Bentley Team Absolute has won the GT Asia Series teams’ title for the second consecutive year with its three Bentley Continental GT3s, straight off the back of a China GT double race-win last week.

The Shanghai-based team went into the final round of the 12-race series at the Shanghai International Circuit with two goals in mind; to retain the teams’ title and win the drivers’ title, and it started well when Duncan Tappy recorded the fastest ever GT3 lap of the track in the first practice session.

After a strong year for Bentley’s Asian partner team that has included 13 podiums, it was in a strong position for the teams’ title going into the weekend. Following a second place finish in race one, the team had the title secured before the final showdown. 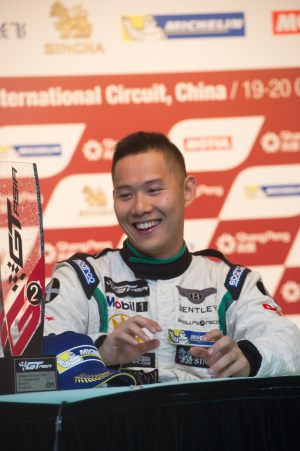 With competitors in all of its Continental GT3s in the running for the drivers’ honours, the pressure was on the whole team, which had its sights on one of the most coveted GT3 titles in the world. Wet weather conditions resulted in an exciting race one, taking several title-contenders out of the running, and going into the final race Bentley Team Absolute’s sole contenders for the drivers’ title were Adderly Fong (HK) and Andrew Kim (KO).

Unfortunately, race two was also in the wet, and despite a clean and solid running from both Fong and Kim, they couldn’t quite do enough to secure the overall honours.

“To be going into the final round with so many of our drivers in the running to take the overall honours shows what a strong and consistent year our team has had,” commented Bentley Team Absolute team principal Ingo Matter. “It was a tough weekend in the wet and although we narrowly missed out on the drivers’ title, we are delighted to, once again, win the teams’ trophy.

Racing in Asia is growing bigger and better with every season and we are committed to moving forwards and growing with it. We were seriously impressed with China GT last week, and GT Asia and Asian Le Mans Series are both key championships globally, now. We are also entering Korea’s first endurance race, RACE123, at the Korea International Circuit in April.

Brian Gush, Bentley’s director of motorsport, added: “Congratulations to everyone at Bentley Team Absolute for taking yet another championship title for the Continental GT3. Since partnering with the team, we have been extremely impressed and we look forward to growing with them in Asia to help them drive forward GT3 racing in the region.”

Bentley Motorsport has finished in second place in the largest GT3 race in the world, the 24 Hours of Spa, with its #8 Continental GT3 and drivers Maxime Soulet (BE), Andy Soucek (ES) and Vince Abril (MC). With a carefully pre-determined race strategy, the Bentley Team M-Sport crew ran out-of-sync with many of the leading GT3 competitors for most of the race but the long-term gains came to fruition in the final stages of the 24-hour endurance event. Staff

Aston Martin will return to the ADAC Zurich 24-Hour race, staged on the world famous Nürburgring Nordschleife (May 10-13), with a two-car entry featuring all six of its 2018/19 FIA World Endurance Championship factory GTE Pro drivers. The British manufacturer will enter a V12 Vantage GT3 in the SP9 category for Maxime Martin (B), Marco Sõrensen (DK) and 2017 SP8 class winners Darren Turner (GB) and Nicki Thiim (DN). In addition, the factory will defend its SP8 victory with a GT4-specification Aston Martin V8 Vantage driven by an all-British team of Alex Lynn, Jonny Adam, Peter Cate and Jamie Chadwick – the first woman to race a factory Aston Martin in a 24-hour race. Staff

Bentley Motorsport has finished in second place in the opening round of the Blancpain GT Series at Misano with the #7 Continental GT3 and drivers Steven Kane (GB) and Vince Abril (MO). Bentley Team M-Sport has once again entered two cars in the full GT Series and has its sights set on all three titles, including the Sprint Series Cup that started in Misano this weekend. Staff