Aston Martin has revealed more shots of its new Vantage GT2. The latest Aston racer was first shown as sketches in January. It also was seen at a test at the Paul Ricard circuit in southern France in March.

The Vantage GT2 fills out Aston Martin’s GT lineup, giving it a competitor in each category. Three teams have signed up to drive the Vantage GT2: James Watt Automotive, Drayson-Barwell and Gigawave.

The car will make its race debut in the first round of the Le Mans Series on April 5 at Barcelona, Spain. The Vantage GT2 can run on standard fuel or E85 ethanol. It’s based on the V8-powered Vantage road car. 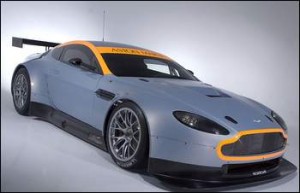 British sports car maker Aston Martin expects to sell fewer cars this year compared to last year due to the economic crisis, the company’s chief executive told German newspaper Die Welt in an interview. Aston Martin sold 5,800 sports cars last year, which was the second-best year in the company’s 95-year history, Ulrich Bez told the paper in an article published on Saturday. “In light of the current weakening in consumer spending we expect 4,500 to 5,000 unit sales this year,” Bez said. Islamic investment firm Investment Dar (TIDK.KW) owns a controlling stake in Aston Martin. The fund was part of a consortium that bought the automaker for about $950 million from Ford Motor Co (F.N) in March 2007. Staff

Almost three quarters of UK consumers would buy British if given a £100,000 budget to spend on a new car, according to new research from online insurance company swiftcover.com. Sweeping aside their German and Italian rivals, British marques emerge as unanimous favorites amongst UK car buyers, with 69 per cent claiming they would opt for a British brand if they had the money to do so. Topping the ‘Dream Car’ list with almost a quarter of the votes is Aston Martin (24%), followed by Range Rover (19%), Bentley (16%) and Rolls Royce (10%). German and Italian luxury marques faired badly by comparison – with just one per cent opting for a Lamborghini, 9 per cent for a Ferrari, 9 per cent for a Porsche and 2 per cent for a Maserati. The top ten swiftcover.com “Dream Cars” for 2008 are: […]

Aston Martin will enter its factory LMP1 team in this year’s Le Mans 24 Hours and next month’s Sebring 12 Hours. The British manufacturer had been expected to sit out the 2010 season while developing a new car for 2011, but will now take two LMP1 cars to Le Mans and one car to the American Le Mans Series opener at Sebring, the next round at Long Beach and the LMS season opener at Paul Ricard in April. Autosport Magazine revealed last week that Mexican driver Adrian Fernandez was working on a deal to race an Aston in the ALMS, and the former Champ Car racer and reigning ALMS LMP2 champion will join the team’s line-up for the program. Stefan Mucke, Darren Turner, Harold Primat and Chris Buncombe have all been retained, with Aston Martin Racing due to announce a […]