The organisers of the  Silverstone Classic (29-31 July) are delighted to announce eBay, the global online marketplace, will be joining the event, for the first time, as the official parts and accessories partner. Demonstrating that eBay is the premier destination for car parts, show-goers will be able to follow the live restoration of a 1982 classic Range Rover over the three-day event. 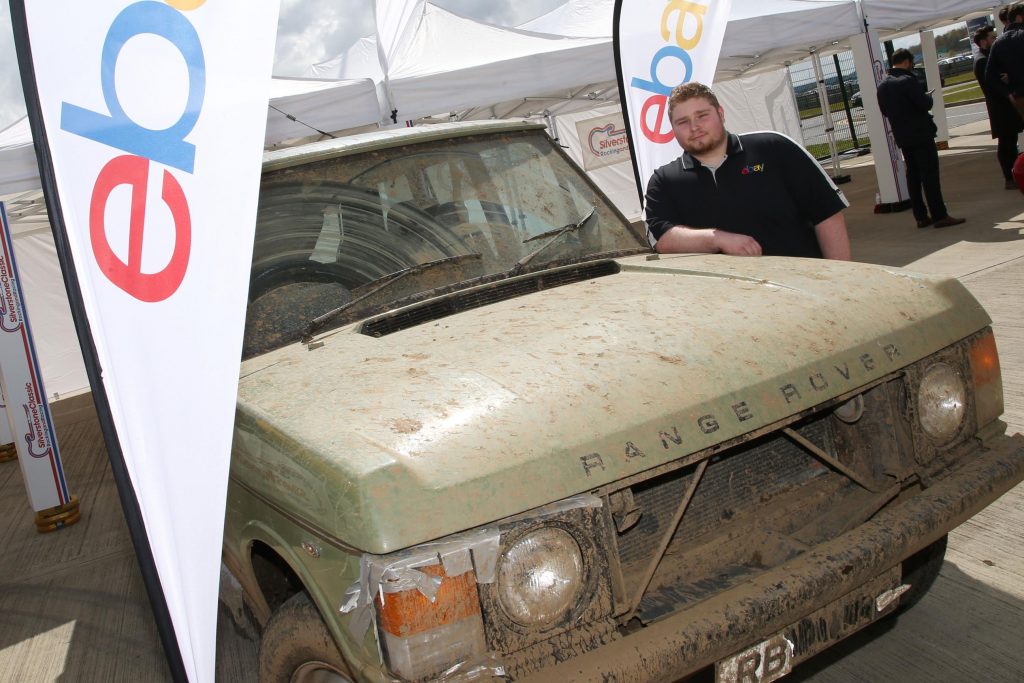 Hosted by eBay, RESTORATION LIVE with Fergus Walkinshaw is sure to be a hugely popular attraction for the tens of thousands of show-goers, many of whom will be travelling to Silverstone in their own lovingly restored classics.

Walkinshaw and his team will guide the crowd through every step of the project as they renovate the iconic first-generation Range Rover using only items bought from eBay. Whether it’s a new replacement body panel or an original piece of internal trim, finding the right pieces shouldn’t prove too tricky as there are more than eight million live listings of car parts and accessories on ebay.co.uk to buy at any time. Indeed, eBay is home to one of the largest collections of motoring products in the world and, thus, the ideal destination for everything from replacement parts for the family car to the final rare piece in a classic restoration puzzle.

We love the Silverstone Classic. It attracts everyone from the highly experienced restorer right through to people who simply just love their car – just like eBay does – so it’s a great event for us to be part of.

With such a huge selection of products Fergus and the team will easily find everything they need when they restore the Range Rover. eBay can help with everything from an everyday replacement part – to a rare component in a classic restoration.

As for the Range Rover, once it is restored to its former glory, it will appear on stage during the Mike Brewer Car Clinic on Sunday at the Classic, with Mike and Fergus answering questions and sharing their experience of the complex project.

“We are understandably enthused to be partnering a company of eBay’s global esteem and importance,” said Nick Wigley, CEO of Silverstone Classic organiser Goose Live Events. “All the more so as eBay will be helping us to add yet another fascinating new dimension to this summer’s festival. A large number of our visitors are no strangers to restoration projects, and I’m sure they will really enjoy seeing a 34-year-old Range Rover being restored to its original grandeur.”

The Silverstone Classic – which in 2015 celebrated its 25th anniversary – is firmly established as the world’s biggest classic motor racing festival. The epic event attracts more than 1,100 race entries and drew a record crowd of more than 100,000 in 2015. The spectacular classic car celebration – winner of the prestigious ‘Motorsport Event of the Year Award’ as judged by the International Historic Motoring Awards in 2013 is staged at the famous Silverstone circuit in Northamptonshire, birthplace of the FIA Formula One World Championship and home to the Formula 1 British Grand Prix.

The three-day festival features the very best of historic racing covering more than eight decades of motor sport, as well as live music from iconic rock bands (topped by The Boomtown Rats, Reef and The Stranglers in 2016) and a wealth of family entertainment. This includes a free funfair, retail outlets, a host of interactive activities, a two-day classic car auction, air displays plus huge showcases of classic cars often celebrating important milestones in automotive history. In 2015, a record number of 120 car clubs displayed more than 10,000 classic cars.

All tickets for the 2016 Silverstone Classic must be purchased in advance.  Adult admission starts at just £42 and sticks to the Classic’s widely-praised ‘access all areas’ policy, thus providing admission to both National and Wing race paddocks, trackside grandstands, the vintage funfair, air displays and the live music concerts which this year include chart-toppers The Boomtown Rats, Reef and The Stranglers.

Full details of all tickets – as well as hospitality packages, special family offers and weekend festival camping – can be found on the event’s official website: www.silverstoneclassic.com.

Rare Last E-Type to be Sold at Silverstone Auction

Silverstone Auctions is to auction a Series II Jaguar E-Type Fixed Head Coupé that is believed to be the last of its type ever sold as new. In excellent condition and never having undergone a major restoration, the Jaguar Light Blue E-Type will go under the hammer at the Salon Privé Sale at Blenheim Palace on 2nd September. The UK specification right-hand drive E-Type was built in August 1970 and was eventually delivered to dealer Charles of Pirbright, where it remained in the showroom for five months until it was sold to its first owner on 7th August 1971, likely making it the last Series II Fixed Head Coupé to find a home. Staff

A stunning and very rare 1971 Aston Martin DB6 MKII Vantage Saloon belonging to touring car driver, commentator and TV personality, John Cleland, will be offered at auction at Silverstone Auctions’ May Sale at Silverstone circuit. As one of only 34 examples made, this original right-hand drive, matching engine and chassis numbers, factory built Vantage DB6 MKII manual has been exceptionally well maintained and improved by Aston Martin specialists throughout its life. Staff

Nearly 50 years ago, Land Rover created the luxury SUV segment with the introduction of the Range Rover. Now it’s defining a new genre with the world’s first full-size luxury SUV Coupe: the limited-edition, two-door, Range Rover SV Coupe. Created by Land Rover Design and Special Vehicle Operations, the SV Coupe is an exemplar of Range Rover design, craftsmanship and capability. It features a seductive body wrapped around the next generation of cabin luxury – with the peerless capability on a variety of terrains and in a variety of weather conditions synonymous with the Range Rover family of vehicles. No more than 999 will be hand-crafted by SVO for clients worldwide. Staff