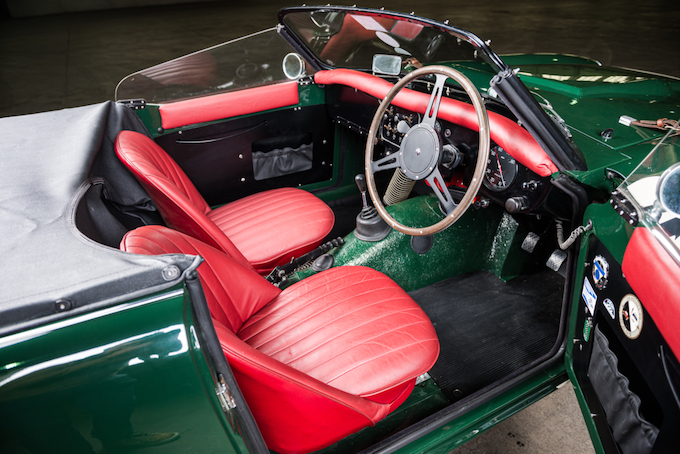 As one of just four ever built, the ex-works 1960 Triumph TRS is famous for playing a significant role in British motoring history as one of three cars which competed in Triumph’s 1960 and 1961 assault in the 24 hours of Le Mans, with their performance resulting in the prestigious manufacturer’s team prize.

Registered as ‘927 HP’, the car set the scene for the yet to be released TR4 featuring one of the very rare ‘Sabrina’ twin cam prototype engines, developed specifically for the demanding Le Mans race by the Triumph Competition department in 1959, of which only a handful exist today.

Now for sale, ‘927 HP’ seeks its next owner through the exclusive Pendine Historic Cars dealership with a sale price of £295,000.

This is a genuine ex-works Triumph TRS with extremely rare racing provenance as well as the legendary Sabrina engine, making it a very desirable, collectors’ sports car. Not only did this car compete twice in the world’s oldest and most famous endurance race, but the Sabrina engine developed by Triumph never made it into mass production, making this a truly unmissable opportunity for today’s racing enthusiasts or collectors to own a really special sports car, either for competing or showing at today’s most exclusive motoring events.
— Jonny Shears, Pendine Historic Cars.

‘927 HP’ first competed in the 1960 24 hours of Le Mans driven by Peter Bolton and Ninian Sanderson. Despite running faultlessly, with the three TRS cars finishing in 15th, 18th and 19th places, this was not Triumph’s year and none of the cars covered the minimum distance required to be classified.

However, in 1961 all three cars returned to Le Mans, this time with ‘927 HP’ raced by Les Leston and Rob Slotemaker. This was Triumph’s year, with all three cars not only finishing the race but covering the minimum distance required and placing in 9th, 11th and 15th, running faultlessly throughout. This result won Triumph the manufacturer’s team prize.

Since the car’s racing success at Le Mans, it was sold in North America via the dealer network of privateers. Seldom used by the new owner, it was later purchased by a Mr K N Gwing of Virginia in 1972. Once again, the car was relatively untouched during this time until the owner’s passing, when it was inherited by Mr Gwing’s daughter. She then sold the car to the current owner in 2008.

The new owner then began a detailed disassembly and restoration to return ‘927 HP’ to its 1961 24 hours of Le Mans guise. This included rebuilding the original ‘Sabrina’ twin cam engine, now one of just two that remain in use today.

Following the completion of the two year restoration, ‘927 HP’ was invited to be displayed at the 2010 Le Mans Classic, and has since been regularly displayed and enjoyed on the road.

This fantastic historic sports car is an access all areas invite to the top motorsport events, no doubt welcome at the Goodwood Revival and, of course, Le Mans Classic. We believe that in the right hands, 927 HP would be a highly competitive entry in current historic motor racing. A post war British sports car, the provenance and performance certainly encompass it all.

Serious prospective buyers are invited to contact Pendine Historic Cars directly for further details on the 1960 Triumph TRS for sale.

The full advertisement for the car with comprehensive image gallery can be found by visiting https://pendine.com/portfolio/1960-triumph-trs/.

Victory at 24 Hours of Le Mans for Aston Martin

Aston Martin Racing has taken victory at the 85th 24 Hours of Le Mans in dramatic style, after Jonny Adam (GB) snatched the GTE Pro lead on the final lap of the iconic endurance race. Partnered by Darren Turner (GB) and Daniel Serra (BR), the trio and their Aston Martin V8 Vantage GTE performed faultlessly to ensure they remained in the hunt for victory right until the death. Staff

Our video this week takes you back, way back. Back to the 1930s when MGs were fierce competitors in racing around Europe and the world, and the Midget, the original Midget, was the car to beat. This film, titled “The Magic Midget” was produced by British Leyland to celebrate the racing pedigree of the MG and possibly transfer some of that aura of speed and success to the more modern incarnation of the MG Midget. From its earliest days MGs have been used in competition and from the early 1930s a series of dedicated racing cars such as the 1931 C-Type and 1934 Q-type were made and sold to enthusiasts who received considerable company assistance. This stopped in 1935 when MG was formally merged with Morris Motors and the Competition Department closed down. A series of experimental cars had also […]