Jon Pressnell, a well-known writer and researcher of the British motor industry has written a comprehensive book on the Morris automobile and the company that produced them. Morris – The Cars and the Company was published in 2013. This 286-page large format hardbound book is a definitive study on the Morris cars from the very beginning all the way to the last of the British Leyland days and the final Morris marque product, the Harris Mann designed wedge-shaped 1800 and the restyle of the Morris Marina into the Ital.

The Morris Marina was sold in the USA and Canada from about 1973 to 1976 as the Austin Marina.

This book is highly detailed with considerable research done on the early, mid and late years of Morris car production. There are voluminous photographs, both in color and black and white, to illustrate the scores of interesting and unique cars the company produced over the decades from the rounded nose “bull nose” Oxford of the teen and twenty years to the final products.

If one is an aspiring student of the history of the British car world, a knowledge of the Morris marque is essential as it was for many years one of the volume producers, at least by UK standards, of cars for the average citizen. It competed vigorously with Austin until Nuffield, the makers of Morris, MG, Riley and Wolseley, merged with long-standing rival, Austin, in 1953. This merger resulted in substantial changes to our beloved Minor in that the older Nuffield mechanicals gave way to newer Austin-derived componentry such as our well known “A” series engine of 803cc, 948cc and 1098cc sizes. As one who spent his career with British Leyland and its successor companies, this historical record of the lead up to the end is quite entertaining.

The book deals well with the commercial aspects of the business, the personalities of the key player such as William Morris, who later became Lord Nuffield, and the technical aspects of the many vehicles they made. The purchase of and integration of Wolseley by William Morris is covered as well as the later rationalization of car models. The continual goal of addressing the export market is covered well. 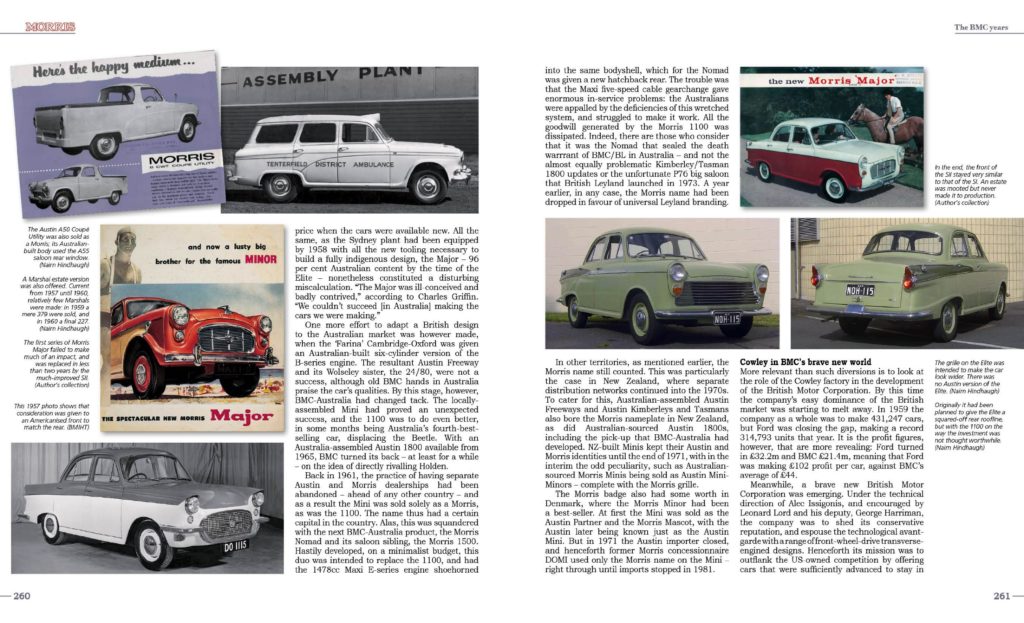 One interesting production detail I found quite fascinating was the fact that Morris purchased body stamping dies from the Budd Company in Philadelphia in the early 1930s, with the goal of producing a relatively large car that would be marketable in worldwide regions. These dies were the same as was used on the US made Dodge Victory Six range of cars. So there are some early Morris cars that appear as virtual clones to a Dodge of the same era. Over the years, William made many trips to the USA to observe and study the American auto industry and its mass production capabilities. For most of us whose sole exposure to the Morris brand is the Minor from the early 1950s to the late 1960s there is much to learn about other company products that came before, during, and after this period.

If you are interested in learning more about the Morris marque than America’s experience with the Minor, this book is a fascinating read. A great winter enjoyment when for some of us our special cars are laid up due to inclement weather. Interestingly, the book is printed and bound in the USA by Odcome Press LP in La Vergne, Tennessee and marketed by Haynes North America Inc., 861 Lawrence Drive, Newbury Park, California 91320. New and used copies are available on Amazon.

John F. Quilter is a long time British car fan and former employee of British Leyland in North America. He has a collection of over 2000 British car models, and that collection continues to grow. Originally from California, John now makes his own in Eugene, Oregon. Click here to see more about John and his cars.

Cecil Kimber – The Man Behind MG – Hall of Fame Inductee

May 7, 2017 Michael Carnell Highlights, Articles, Hall of Fame, MG, People Comments Off on Cecil Kimber – The Man Behind MG – Hall of Fame Inductee

To say that Cecil Kimber is famous for his role in the formation and growth of the MG Car Company would be a bit of an understatement. To title him as just an “automotive engineer” would be even more so. Cecil Kimber was the creator and driving force behind what would become one of the best-loved car brands of all time. Cecil Kimber will be inducted into the British Sports Car Hall of Fame this June. Cecil Kimber was born in South London on April 12, 1888.  At a young age, he became interested in vehicles and motorsport. He attention was originally drawn to motorcycles, but after an accident that badly damaged his right leg, Kimber made the switch from two wheels to four wheels. Michael CarnellEditor at Just BritishMichael Carnell is the editor and founder of the Just British Online Motoring Magazine. […]