A wide variety of Lister models took part in the Stirling Moss Trophy at Silverstone Classic over the weekend, crossing the finish line second and third in a competitive field of pre-’61 sports racing cars.

The Lister Jaguar Knobbly ‘5’ had looked a certain winner as the race began to unfold, with a brilliant start taking it from sixth to first on the opening lap. For the next five laps Listers diced for the first three positions, with the Knobbly ‘8’ and Lister Costin Jaguar ‘16’ chasing down the leader.

The Ferrari 246S ‘46’ was battling hard, making its way through the grid and dicing with the Listers every step of the way. Eventually it was sitting second just behind the Lister Jaguar Knobbly ‘5’ and finally jumped in to the lead during the pitstop window.

But the Listers continued to chase for the win, with Knobbly ‘5’ determined not to let the Ferrari get away, sliding through the corners as it chased down the leader. In the end, the Ferrari had too much of a lead to make up, finishing just ahead of Lister Jaguar Knobbly ‘5’ and Lister Costin Jaguar ‘8’.

The impressive results for Lister don’t stop at the two podium finishes, with another two cars in the top ten of this 38-car race. The Lister Costin Jaguar ‘16’ finished in fifth place, while the Lister Knobbly ‘13’ finished in seventh. 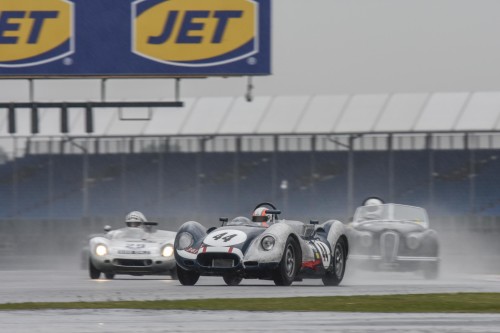 Lister Motor Cars chairman Lawrence Whittaker said: “The Stirling Moss Trophy at this year’s Silverstone Classic was a great example of just how spectacular historic racing can be. Our cars battled hard throughout, taking two places on the podium in a really competitive race.

“The Lister Knobbly in particular proved once again what an excellent racing car it is, which certainly helps to explain the fantastic reaction we’ve had to our fully sold-out continuation Knobblys. Watch this space for more news on some final editions.”

Following the end of another incredible season of wheel-to-wheel racing in classic Listers, Lawrence Whittaker – CEO of Lister Motor Company – has presented the Brian Lister Cup to Tony Wood, Will Nuthall and their team for a sensational racing comeback in 2015 in the Woods’ family Lister-Jaguar Knobbly. Presented at a star-studded dinner hosted by the Royal Automobile Club, the Brian Lister Cup went to Wood following a herculean effort that saw his priceless Lister-Jaguar Knobbly repaired in less than 40 days following an accident before the season began. Wood and his team then went on to grab three podium finishes and fifth place overall at the end of the season. Staff

Aston Martin Lagonda today announces two important new additions to its UK site operations. The Aston Martin Test and Development Centre at Silverstone will become a new hub for prototype vehicle testing, focused on chassis dynamics and high-speed handling. Concurrently announced is the creation of a central London office providing conveniently located space for meetings and events. Commenting on these announcements, Dr Andy Palmer, Aston Martin President and Chief Executive Officer said: The company is now investing for growth across the Aston Martin and Lagonda brands. I am particularly pleased that we can now call Silverstone home for dynamic testing and development. Staff

With more than 1,000 of the world’s finest historic competition cars racing on the famous Silverstone Grand Prix Circuit, no fewer than 10,000 iconic cars from yesteryear on display in the infield paddocks and in excess of 100,000 visitors lapping up the magical nostalgic atmosphere, the annual Silverstone Classic is firmly established as the ultimate celebration of classic cars. In 2016, for the first time, the hugely popular three-day festival is offering an exciting new opportunity for an organisation to share in the success as the glittering event’s official charity partner. Staff