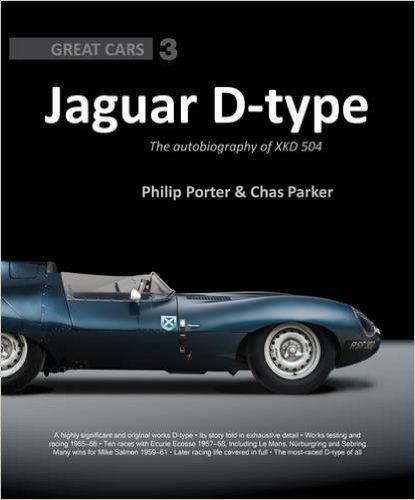 – a car that has raced more than any other D-type. The long and varied life of XKD 504 is recounted in full, from its role as a works car used extensively for testing fuel injection, to two seasons of racing throughout Europe with Ecurie Ecosse, to four busy years of national competition in the hands of first Mike Salmon and then Peter Sutcliffe. This book provides fascinating insight into every aspect of this D-type’s history, supported by a fine collection of period photographs. Any Jaguar enthusiast will enjoy this addition to the ‘Great Cars’ series.

The authors: Philip Porter is a Jaguar authority best known for his award-winning E-type books, notably The Definitive History and Ultimate E-type, as well as for running two successful Jaguar clubs, the XK Club and the E-type Club. His co-author, Chas Parker, swapped a career in astronomy for writing about motor sport, and his five books include comprehensive histories of Brands Hatch and Silverstone.

For more information about this book and others by the same publisher visit: www.porterpress.co.uk

Jaguar XK DIY Restoration & Maintenance by Bob Exelby is an impressive book. This is the story of how one man completely restored his XK 120 roadster, transforming it from dereliction into a thoroughly beautiful example of this iconic sports car.  Bob Exelby also took the time to investigate and incorporate numerous detail improvements, making the car even more usable and practical for today’s roads, some 65 years after it was built. All of the modifications were tasteful, though some might still argue with their applicability to a true restoration. Exelby wanted a useable and dependable car in addition to a valued classic. Michael CarnellEditor at Just BritishMichael Carnell is the editor and founder of the Just British Online Motoring Magazine. As a lifelong British car fan, he has owned or driven British cars of all ages from Austins and […]

A Le Mans-winning Jaguar D-Type, once part of the Ecurie Ecosse race team, became the most expensive British automobile sold at auction with a final price of $21.78 million. In addition, the very first Shelby Cobra, a CSX 2000, went for $13.75 million, setting the American record. The 1955 Jaguar was the first such model supplied to a private team by the maker, based in England’s Midlands. The car went on to beat Jaguar’s own entries in the 1956 Le Mans. It was offered for the first time in 20 years, after being in an American collection. The RM Sotheby’s sale, which started on August 19, is continuing in Monterey, California. Staff

Proteus To Come To US?

February 4, 2008 Staff Classic Cars, New Cars Comments Off on Proteus To Come To US?

Classical Drives has some great news for us super car fans: Proteus is coming to the US. For those of you that don’t know, Proteus is a British car manufacturer that makes exacting replicas of the legendary C and D type Jaguars. These cars are not fiberglass knock-offs, they have all aluminum bodywork that is hand formed much as the originals were. If you have a fetish for the great racers of the ’60s, you have got to check out these beautiful machines. Drool away. Staff