Production of the full-size McLaren P1™ may have ended but McLaren Automotive has linked up with selected partners to offer every fan of any age a miniature McLaren P1™ of their own.  Many sizes, shapes and styles are available, from 1:64 models all the way up to an exact, hand-crafted 1:8 scale replica. 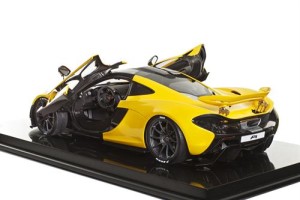 The smallest size of McLaren P1™ is now within the reach of the very young, even if their only income is from pocket money, thanks to Mattel-HotWheels. The miniature die-cast toy McLaren P1™ is available in Volcano Orange and Supernova Silver and measures 75mm. The brand has been a favourite of young collectors since 1968 and remains one of the most popular toy car producers today.

For those who would rather build their own, Lego® has created a Volcano Yellow McLaren P1™ as part of the Speed Champions series. The buildable vehicle has all the authentic details of the ultimate McLaren hybrid supercar. The owner can even attach their own stylish wheels and use the wrench to prep their car, and then speed away drifting around the cones in a race to the finish line.

Stepping it up a gear, Scalextric™ and Maisto will take any McLaren enthusiast closer to a behind-the-wheel experience. The Scalextric™ team at Hornby Hobbies has worked with McLaren for the Pro Chassis Ready models in various McLaren colours including Volcano Yellow and Volcano Orange. The slot cars, a firm favourite for many years, offer a unique taste of McLaren P1™ magic.  An alternative driving experience is provided by Maisto’s highly-detailed, radio-controlled 1:14 scale McLaren P1™ with illuminating headlights and tail lights.

For the big kids of the family, resin or die cast models by TSM (True Scale Models) AutoArt, Minichamps and Tecnomodel provide a sophisticated approach to collecting beautiful McLaren P1™ models. All seek to create 1:43 scale centrepieces in a car collection with models chosen for their provenance, collectability and place in McLaren P1™ history.  These include Job#1 which was the first production car built, the Nürburgring edition XP2R prototype famous for completing the circuit in less than seven minutes, the camouflaged McLaren P1™ prototype model with the unique track inspired McLaren camouflage design, and the car Formula 1™ World Champion Jenson Button drove at Goodwood Festival of Speed for the car’s global dynamic debut. New for 2016 will be the Amethyst Black PP3 pre-production model. With its registration P1 OOV, this is the McLaren P1™ notably reviewed by journalists across the world and the star of many a magazine front cover and video. These collectibles capture the detail of the McLaren P1™ in all aspects including the wheels and tyres, seat belts, door handles, engine and suspension.

Finally, what do you buy the person who has everything? McLaren Automotive now has the answer, even for a McLaren P1™ owner. Amalgam Fine Model Cars can produce an exact McLaren P1™ replica in 1:8 scale. Amalgam has the ability to fuse exceptional craftsmanship with the latest advance model-making techniques. The stunning creations are precise to the last 0.1mm, down to the original hand-beaten asymmetric bodywork and creases in the fabric of the seats. The 1:8 scale allows you to see the curves and the shapes without being too big or too small. The complexities of the build made up of so many individual components make them a true piece of art. Made to order, this is the ultimate present for the ultimate car in the McLaren Automotive family.

McLaren P1™ models and miniatures can be found at selected McLaren Automotive retailers and various online shops, including www.amazon.com.

Amalgam models can be ordered through McLaren Automotive retailers worldwide.

Diecast – Jaguar Daimler Products When You Are Not Doing the Driving

Jaguar’s companion brand, Daimler, was acquired in June 1960.  At the time Daimler made buses,  military vehicles and a range of cars such as the Daimler Dart roadster also known as the SP250 and a large sedan/limousine known as the Majestic Major.  Daimler was long the vehicle supplier to English royalty and can trace its beginnings to earlier than 1900.  After Jaguar acquired Daimler they began to phase out some models and badge engineer existing Jaguar models as Daimlers.    Cars such as the Mark 2 based Daimler 2.5 liter sedan which used Daimler’s own 2.5 liter hemi V8 in place of the Jaguar XK engines. Later there was a whole range of Daimler badged XJ sedans beginning with the Series 1 and continuing through the Series 3. In  1968 Jaguar introduced the DS420 limousine which was based on many of the mechanical components of […]

Fold Yourself a New Car

With all this talk of the Geneva Motor Show and all the focus on nice new shiny, not to mention expensive, cars, some of us may be feeling a little left out. What if you can’t afford to get on the waiting list for one of the new Morgans? Or what if you desire the Bentley EXP 10 Speed Six but just live a few too many miles away from the dealership to make those regularly scheduled oil changes convenient. Well then, do we have a solution for you. Not only will our proposed solution net you a car you can afford, but it is recyclable and can even be made from recycled materials itself. Of course, there is the problem of there being no engine and no way to actually use the car for any practical purpose, but at least […]

One of the most iconic cars in cinematic history, James Bond’s Aston Martin DB5, has been released by PLAYMOBIL for all film lovers and collectors to enjoy. […]