He was given a tour of the McLaren Production Centre, in Woking, led by Mike Flewitt, McLaren Automotive Chief Executive Officer. Along the way, The Duke met some of the company’s 2,100 workforce who designed and hand-assembled a record 3, 286 cars last year, the majority exported around the world.

The Duke talked to Alex, one of the company’s young apprentices nominated as apprentice of the year. He then met Amina, a recent production apprentice, along with her mentor Mandy, to understand how the company supports her development to help nurture future talent, essential for a company blending cutting edge design with hand-built craftsmanship.

Mike also gave The Duke the chance to place the famous McLaren badge on one very special car before seeing a model being put through its paces on a rolling road test bed.

Design Director Rob Melville explained to The Duke the philosophy behind McLaren’s latest supercar, the 720S. Launched in March, it is the first model in the second-generation Super Series that has already sold out for this year and one of 15 new models and derivatives the company will deliver by 2022.

Rob explained how he develops the company’s design strategy, working with the engineering and manufacturing teams, as well as talking to customers, to help create the ultimate drivers’ cars.

McLaren Automotive is the largest part of the McLaren Group, which also includes a technology business and racing team that are headed by Chief Operating Officer Jonathan Neale and Executive Director Zak Brown, who were also on-hand to welcome The Duke. 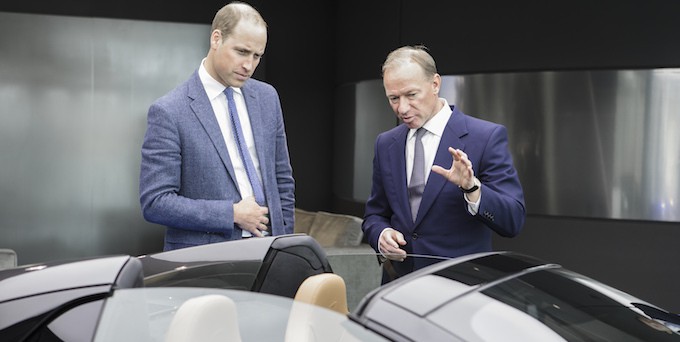 It’s a great personal honour to welcome The Duke to McLaren Automotive and something that each and every one of our people should feel justifiably proud of as a globally renowned British sports and supercar creator.

Part of the McLaren DNA has always been about achieving engineering excellence and a pioneering spirit. That goes right back to our founder Bruce McLaren and is instilled in everyone one of us today. But I know that we can only continue to create world-beating cars and technologies that truly push the boundaries of what’s possible by harnessing the talents of an incredible and diverse group of men and women who all bring their unique skills and experiences to bear.

It’s obvious that we’re passionate about our cars, which comes through in abundance to our customers around the world who drive and love our products. What’s sometimes less remarked upon, and which I hope came across during The Duke’s visit, is that we are equally passionate about backing the next generation of design, engineering and manufacturing talent. That’s because we recognise that we rely on attracting, nurturing and developing top talent right across our company, something else we can all be proud of.