The best motoring writers and photographers of the year were honoured at the 2015 Guild of Motoring Writers Awards in front of a capacity crowd including Sir Stirling and Lady Susie Moss.

More than 30 professionals were recognised for their work in 2015 by the Guild, with Automotive World’s Martin Kahl picking up the prized Renault UK Journalist of the Year award for both his coverage of a wide range of industry topics and also his leadership of a broad team at Automotive World Megatrends.

Hilton Holloway was awarded second place in the Renault UK Journalist of the year, and Jim Holder won third place.

The best upcoming writers were honoured during the night. Autocar’s Lewis Kingston won the Newspress Young Writer of the Year, and Ben Gribbin won the Motoring Research Breakthrough Blogger of the year. The CAR Magazine-sponsored Phil Llewellin Student of the Year was Xavier Boucherat; Beth Llewellin and CAR editor Phil McNamara presented the award.

Driver of the Year Oliver Rowland and Rider of the Year Danny Kent could not attend the event: both were away testing their 2016 machines. But fast-rising star Rowland did say via email how pleased he was to receive the award. He’s definitely one to watch.

The Mercedes-Benz Award for the Montagu of Beaulieu Trophy recognises excellence in recording the history of motoring. Winner this year was Davide Bassoli for his book on the early days of the Rolls-Royce Silver Cloud and Bentley S1.

The judges also praised Sir Stirling Moss’ My Racing Life, a book written in collaboration with Guild member Simon Taylor. Sir Stirling attended the night and collected the award, quipping “all you need to do is find some clever bloke like Simon and pick up an award”.

Sir Stirling and Simon requested the prize money for the award go to the British Racing Drivers Benevolent Fund; BRDC secretary Gillian Carr was on hand to collect the cheque. 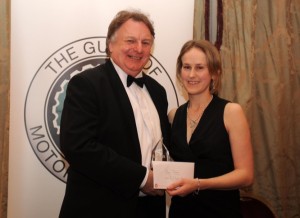 Vauxhall’s Denis Chick was revealed as the latest Friend of the Guild on the night and the Guild’s own Honorary Secretary Chris Adamson received the Pemberton Trophy, which recognises an outstanding contribution to motoring; General Secretary Patricia Lodge was also recognised for her tireless work.

The full list of Guild Awards winners is below (they were live-tweeted during the night, at @GoMW_UK); the event, held at the Royal Automobile Club Pall Mall, was attended by almost 200 writers, PRs, company executives and industry legends.

Congratulations to all those named and honoured. The Guild is grateful to all existing and new sponsors for their support in 2015. For full details of the categories and winners (and, new for 2015, to read the winning entries themselves), see http://gomw.co.uk/news/210-2015-guild-awards-the-winners.

The full list of 2015 Guild of Motoring Writers award winners