GKN has agreed to a multi-year partnership with Panasonic Jaguar Racing, which will see the global engineering group provide design, manufacturing and consultancy services to the Formula E team.

The official partnership was announced at the Frankfurt Motor Show, in advance of the 2017/18 FIA Formula E championship that commences in Hong Kong on 2 December, and continues GKN’s longstanding relationship with Jaguar.

Expertise from across GKN will provide technical consultancy and new technology, from driveshafts and differentials to the use of additive manufacturing, for the team’s Formula E race car – the Jaguar I-TYPE. GKN Driveline’s considerable experience in delivering state-of-the-art electric vehicle systems means it will also advise on the development of the I-TYPE’s all-electric powertrain.

The GKN logo will feature on the livery of the 2017/18 I-TYPE race car, as well as driver helmets and suits, team kit and merchandise.

We have been following the development of Formula E since its inception and have been impressed by how quickly the series has established itself as a competitive and exciting racing series. GKN is excited to be involved in this electric technology showcase and to continue its activities in global motorsport.

As a world leader in advanced drivelines, lightweight structures, and state-of-the-art electrified systems, GKN is proud to join Panasonic Jaguar Racing in its mission to innovate and inspire on the world stage. We can’t wait to get racing in Hong Kong.

Jaguar Land Rover is Britain’s largest R&D investor, and its Formula E motorsport team continues its mission to ‘Race to Innovate’, using the championship as a platform to develop the next generation of battery electric vehicles.

We are honoured to welcome GKN to our team – a company that will bring its expertise and experience to the race track. They share our passion to inspire the next generation of engineers. At Panasonic Jaguar Racing, we want to be successful on and off the track and we look forward to driving forward together in this multi-year partnership.

Formula E continues the long-running partnership between GKN and Jaguar, dating back to 1935 when the company supplied driveline technology to the first SS Jaguar saloon. Today, the company supplies every Jaguar model on the market with a range of driveline technologies, including high-performance CV Joints and intelligent all-wheel drive systems. 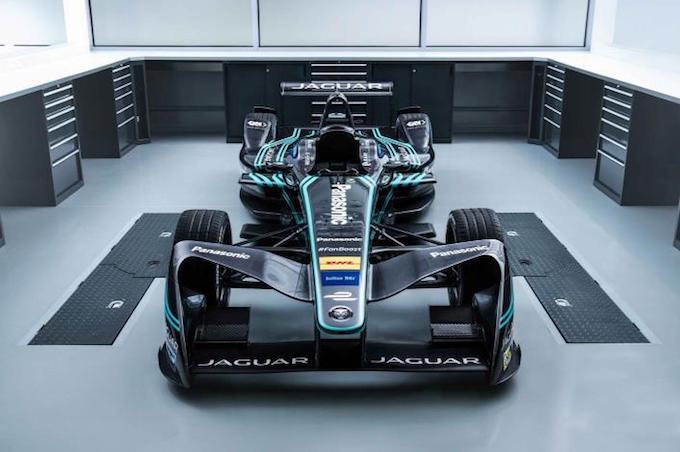 In motorsport and Jaguar’s performance cars, GKN driveshafts have featured on almost everything, from the Le Mans-winning C-Type in 1951 to the XJ220.

Formula E represents the company’s latest motorsport commitment, as the company already has an enviable heritage in championship-winning and record-breaking race cars. Fifty years ago, GKN sideshafts helped to power the Ford GT40 to its overall win at the Le Mans 24 Hour race. Since then, the company has continued to developed lighter, faster and stronger technologies to help its clients finish at the top of the podium.

GKN systems helped electric vehicles to class wins at Pikes Peak in 2012 and 2013. Its electric flywheel was part of Audi’s winning formula with the R18 e-tron Quattro at Le Mans in 2014. The top 10 finishers in the 2017 Dakar Rally all used GKN driveshaft joints, and it currently supplies the entire grid of the British Touring Car Championship with outbound CV joints.

May 15, 2017 Staff Highlights, Jaguar, Racing and Competition Comments Off on Panasonic Jaguar Racing Points in Monaco

Panasonic Jaguar Racing recorded their second consecutive points finish in today’s FIA Formula E Monaco ePrix. Mitch Evans and Adam Carroll survived a testing battle throughout the race to finish in P10 and P14, scoring another valuable championship point for the British team. Jaguar remains P9 in the team standings. Racing in the Mediterranean Principality, Mitch and Adam succeeded in bringing both cars home through an action-packed race, recording the team’s second consecutive top ten finish in only the fifth race since Jaguar returned to international racing.  Staff

Panasonic Jaguar Racing are heading to Hong Kong for the start of their second season in the FIA Formula E Championship. The season opener takes place on 2 – 3 December in Asia’s first ever double-header race weekend and will be the first-time drivers Nelson Piquet Jr. and Mitch Evans line up on the grid together in the new British team. At the Hong Kong E-Prix drivers will complete 45 laps of the 1.86km street race circuit in the new Jaguar I-TYPE 2 on city’s iconic Harbor front. With ten turns and two hairpin bends, Panasonic Jaguar Racing are ready to electrify the city’s streets. Staff

Jaguar Ready To Leap on the Marrakesh Express

November 8, 2016 Staff Highlights, Jaguar, Racing and Competition Comments Off on Jaguar Ready To Leap on the Marrakesh Express

From sweltering Hong Kong to the labyrinthine souks of Marrakesh – Panasonic Jaguar Racing’s second race in the 2016/17 FIA Formula E Championship will offer a striking contrast thanks to the heady flavours of Morocco, as both the all-electric Jaguar I-TYPE and the series make their first appearances on the African continent on November 12. The British manufacturer made a solid start to its motorsport return in October, but is hoping to use the lessons learned on the Hong Kong harbour-front street circuit for its second race. Britain’s Adam Carroll finished 12th in a hectic, safety-car interrupted race, while New Zealander Mitch Evans was forced into retirement by a technical issue. Staff