I attended two different car shows this past weekend, and while there were good things and difficulties with both of them, what always stands out is the people. It was great seeing old friends, making new friends, and just generally enjoying the company of like minded British car enthusiasts. 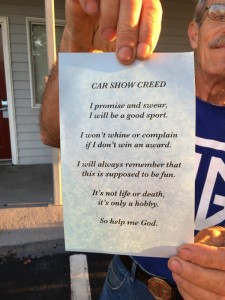 My good buddy Gene Gillenwater showed me a car show creed that he had been given at a show back in his home state of Ohio. I loved it. He later had it on the windshield of his MGB at the show, and I saw many people stopping to read it and comment appreciatively.

Too often at these shows folks get caught up in competition and who has the better car, the cleaner car, the car with the more accurate stitch-count in the seats. I have even known people who will go out and buy a car for the sole purpose of winning a car show. Where is the joy in that?

Far too often we forget that these shows and these cars are supposed to be fun. When it is too serious, when it isn’t fun any more, there is something wrong. When the cars come between us instead of bringing us together, we need to realign.

In that mindset, let me share here the Car Show Creed that Gene shared with me this past weekend. Maybe this should go with all registration packets.

I promise and swear,
I will be a good sport.

I won’t whine or complain
if I don’t win an award.

I will always remember that
this is supposed to be fun.

It’s not life or death,
it’s only a hobby.

So help me God.