Manufactured in December 1961 at the Coventry factory, the car was delivered to Sir William in January 1962 and registered to his Wappenbury Hall address in Warwickshire. Not just any ordinary Jaguar, this Mk X was one of the very first “Zenith” cars produced and made specifically for Lyons to use as his daily driver and finished to his very personal and exact specification.

Synonymous with his reputation, Lyons clearly demanded only the very best and the top of the range car houses a 3.8 litre, 6-cylinder engine, which could have whisked him along Warwickshire’s roads at speeds of up to 120 mph, impressive for Britain’s widest ever production saloon. As Jaguar’s latest model, it featured the ‘new look’ four headlamps set above distinctive chrome bumpers and vaned grill.

Inside, the interior is trimmed out in luxurious leather, with carpeted foot wells and walnut woodwork throughout. Extra features added on Lyons’ request include walnut rear picnic tables, complete with angled mirrors allegedly installed to allow lady passengers to adjust their makeup. Sir Lyons also requested electric rear windows, which was not the norm at the time, allowing him to enjoy a cigarette when riding in the back seat, which his wife did not approve of. 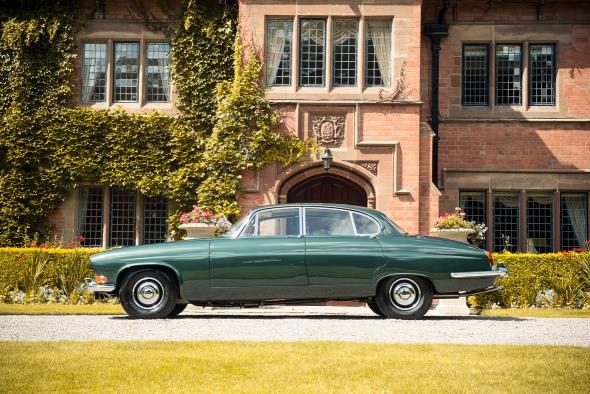 Sir William Lyons, also known as “Mr Jaguar”, used the car for three and half years before it was sold to the Cheltenham Motor Jaguar dealership. It was then purchased by a local gentleman in 1968 who owned the car until he died in 2012, after which it was acquired by its fourth owner.

The current owner purchased the car in 2014 and then decided to subject it to a long-term, comprehensive restoration to near concours standard, carried out by Jaguar specialists under his supervision. The car was then transferred to the Jaguar Heritage facility in Coventry, returning to its production site after 50 years, for final checks and sourcing of minor parts. Now back to its original and exceptional glory, it will be sold at Silverstone Auctions’ most prestigious sale of the year, estimated to sell for between £75,000 and £100,000.

Speaking ahead of the sale, Nick Wale, managing director of Silverstone Auctions commented, “We are honoured to have Sir William Lyons’ personal car in the sale, and what a beautiful car it is. This car has a very special history but it is also a very stylish and elegant car to own. Every inch of the car says luxury. Cars like this just aren’t made anymore”.

Today the car is finished in its original color of Opalescent Dark Green with beige leather interior and still bears its original Coventry number plate, 7868 RW. The odometer shows just over 71,300 miles, covered over the last 55 years between five owners.

“This is the ultimate car for any Jaguar collector and is a special piece of Jaguar history. It still has the feeling of superiority on the road which was the trademark of all Jaguar saloons in the 1960s. It presents and drives beautifully, just as it did for Sir William back in the day,” concludes Nick.

The prestigious Jaguar / Guild Of Motoring Writers (GOMW) Sir William Lyons Award is now open for entries, offering aspiring motoring journalists aged 17-23 their first step on the career ladder to becoming a professional writer. After celebrating 50 years of the award in 2016, the 2017 prize will once again be presented at the Royal Automobile Club during the Guild Annual Dinner and Awards. It gives the winner their first chance to network with potential employers and PR colleagues. Staff

I have mentioned this book a few times before, but I owe it to you to give a more informative review. Jaguar Design: A Story of Style, is as stunning book both in presentation and in content.  As billed by publisher Porter Press, this is, essentially, the story of three men — Jaguar company founder and owner Sir William Lyons, aerodynamicist Malcolm Sayer and current Design Director Ian Callum — and how they shaped the cars that made Jaguar famous. The line that really struck me, and it actually occurs in Ian Callum’s introduction, is in answer to the question, “Should not form follow function?” To this Callum replied, “Yes, of course, but one of the functions of a Jaguar is to be beautiful.” In a nutshell, that hits at the core of what makes a Jaguar a Jaguar, and what […]