Our video this week is humbly titled “MGB Movie” and traces the development of the MGB from its replacement of the venerable MGA in 1962 all the way through MGs decline and the resurgence with the MG RV8 in 1993.

It is easy to forget today how important the MGB was during its time. If you go to a British car show this weekend, who can blame you for getting a bit tired of the rows on rows of Bs? Hey, don’t blame the messenger.  I have a 1977 B roadster now, have had numerous models and vintages of convertibles and GTs, and absolutely love them. But, even I can get a bit tired of the umpteenth over “restored” B with a Weber carb, headers, electronic fuel pump, alloy valve cover, stone-guard headlight covers, and modern digital radio. We are justified in forgetting that when these cars came out they were affordable, fun, relatively quick with good handling, and stayed in production for nearly two decades.

There were more MGBs sold than any other British sports car. Even now the Bs help to keep numerous concerns in business and probably are only out-numbered in the European collector car market by the Volkswagon Beetle. To this day, the MGB is a solid car that is relatively affordable to both purchase and purchase parts for, easily repaired, and a heck of a lot of fun to drive. And when someone stops you in a parking lot to talk to you about the “one they used to have”, as inevitably and regularly happens, you begin to understand how significant the lowly B is. 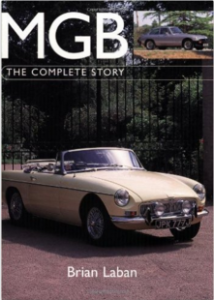 The MGB has been out of production for over 35 years, not counting the RV8. It has been gone twice as long as it was alive, and it is still missed. It is still sought after, still modified, still flogged on tracks, mountain curves, and autocross courses, and still loved. As I said, I have had a B in my possession in some condition or another almost constantly since 1982. The few years scatted throughout that 34 year period when I didn’t have an MGB around alway seemed a bit empty. Bs get under your skin and into your hearts.

Anyway, enjoy our video of the week – the MGB Movie.

An ex-London to Sydney marathon car abandoned in a scrap yard has been rescued by enthusiasts at one of the UK’s biggest MG clubs. The car, which took part in the 1968 event, has been dragged out of the Southampton scrappy and given a new home by the MG Car Club. Driven by Jean Denton, UMD534F was not a Works entry, but did receive significant support from the BMC Competitions Department. The car was prepared for racing by her husband, Tony Denton, and Tom Boyce – Jean’s navigator for the rally. That meant double-welded seams, uprated headlamps and a double fuel tank in the boot. The passenger seat could also be converted into a bed. After finishing in 42nd place, the sports car was put out to pasture and finally dry stored in the 1980s. Now the club’s MGB Register […]

VotW – Top Gear on the MGB Abingdon Edition at Silverstone

August 16, 2018 Michael Carnell Highlights, MG, Video of the Week Comments Off on VotW – Top Gear on the MGB Abingdon Edition at Silverstone

In this clip from Extra Gear in 2016, Rory Reid heads to MG Live at Silverstone to get the verdict on the MGB Abingdon Edition. From the Frontline website: The concept was the easy part, the design a greater challenge and the implementation even more so, but welcome to the all-new MG Abingdon Edition. Conceived for the driver that appreciates quality and craftsmanship but wanting something more than just understated class, style and charm. The Abingdon Delivers literally earth shattering performance transporting you from 0 – 60 miles per hour in just 3.8 seconds. Combine this with the latest in suspension and braking design, add in the most detailed of finishing’s using the finest materials available in the world and you have a car that will not only make you smile every time you see it, but find every excuse […]