Let’s get bumpy this week!  Our Video of the Week this time is going to be a Morris 1100 television commercial from New Zealand featuring the car’s hydrolastic suspension. Made for the New Zealand British Motor Corporation (BMC) distributor Dominion Motors.

If you don’t know, hydrolastic suspension was used on early Minis and the full line of BMC 1100 / 1300 cars, collectively known by their factory designation of ADO16. The ADO16s include the MG 1100, Austin America, Morris 1100, Vanden Plas Princess 1100, Riley Kestrel, and many more. At this point, BMC was huge into badge engineering.

Hydrolastic suspension cars, at least in this form, use liquid-filled dampers at each of the four wheels instead of shocks and springs. Those dampers, which are basically large heavy rubber bladders, are connected front-to-back by hoses. This means that when the front left wheel hits a bump and is pushed up, the liquid will be pushed out of the bladder, through the hose, to the back left wheel, thereby expanding that rear bladder and raising the body on that left rear corner. This process keeps the car level.  It actually works quite well.

Although in the days of the BMC1100 the fluid filling the hydrolastic system was much like anti-freeze, a mixture of water and alcohol, the system was later re-engineered to being gas filled. That system is known as “hydrogas” suspension and was used on cars such as the Austin Allegro, Austin Maxi, and even the MGF. In a way, it is even a forefather to today’s air-bag suspension.

The system works surprisingly well, is amazingly robust, and simple to work on. Hydrolastic suspension gives a very soft, even cushiony ride, although it can tend to bounce on roads with repetitive humps. The system works so well in fact that it was in a 1964 MG Liquid Suspension Indy car. Yes, a hydrolastic MG ran at Indianapolis – or at least its guts did.

For more information on the ADO16 / 1100 breed of car, please check out The 1100 Club. The book shown below, BMC 1100 and 1300: An Enthusiasts Guide, is a good introduction to these cars. There are a few inaccuracies in this book, but it is still a worthwhile read. The Story of the BMC 1100 is a fantastic, glossy, hardcover book which can be purchased through The 1100 Club. Although a bit more expensive and a bit harder to get (but not much!), this is really the definitive book on the car.  I own both books and highly recommend them both thoughStory of the BMC 1100 must get the nod. 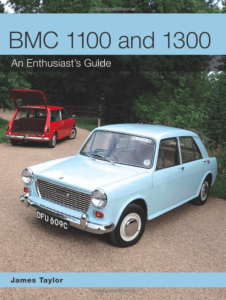 I have to admit it, I am a die-hard fan for the BMC 1100 family of cars. Say what you want about the British Motor Corporation, BMC, and its later incarnation BLMC, British Leyland Motor Corporation, these were innovative cars. This includes the MG1100 Sports Sedan, MG 1300, Austin America, Morris 1100, Vanden Plas Princess and even Wolseleys! To that end I want to call your attention to the fantastic site by my friend Todd Miller at AustinAmericaUSA.com. Not only does he have repair information, historical details, and an Austin America registry, but he also has reproduced some hard to find parts such as rubber vent window inserts. Oh, and want something really wild? He has been in personal contact with Dr. Alex Moulton, the inventor of the revolutionary hydrolastic suspension system used in these cars. Some of the emails […]

Our Video-of-the-Week for you this second week of January is about one of my all-time favorite cars, the MG 1100. The video comes by way of Shelburne Films and their MG Cars Channel. […]

The British Motor Corporation’s (BMC) 1100 and 1300 model range was amongst the most successful in the Corporation’s history, selling more than 2.1 million of all types between its introduction in 1962 and its demise in 1974. Worldwide, the BMC 1100 was sold under eight different marque names and in two-door saloon, four-door saloon, two-door estate, and five-door hatchback forms – and very nearly as a van as well. In Britain, it was the country’s best-selling car between 1962 and 1971, being beaten just once (in 1967) by the Ford Cortina. The BMC 1100 and 1300: An Enthusiasts Guide by James Taylor looks at the design and development of a model range that at the time confirmed BMC as a pioneer of new automotive ideas and had a profound impact on other manufacturers. It covers not only the full standard […]