This week our video comes by way of Scotland and features the immortal Austin Healey. This event may have taken place four years ago, but I think you will agree that the cars look as good today as they did then, or even 50 years ago.

Coming to us from the Austin Healey Club in the UK, the footage is actually from 2013 when Crieff Hydro in Scotland hosted over 250 Austin Healey cars and their owners at the 4th European Healey Meeting.

The above video was taken at the Knockhill Circuit in Dumfermline, Fife, which played host to the event’s Auto Test. Fastest time of the day went to Oliver Chatham’s 3000 Mk1, which completed the 1.3-mile course in 37.7 secs.

Although a National Club formally instantiated through a Limited Company – the Austin Healey Club Ltd – the strength of the Club is its local Centers. Meetings and events are largely run at the local level, which drives the club to be more adaptive to what members want! 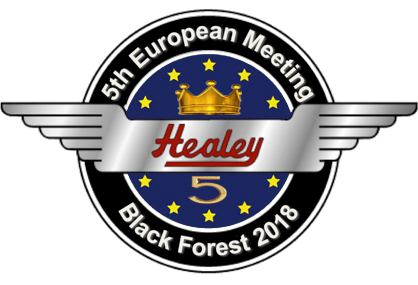 The 5th European Healey Weekend will take place in June 2018 in the Alsace region of France and the Black Forest region of Germany. The website for this enticing event is open at  www.euromeet2018.com

A week of motoring celebrations in Scotland is underway with the Concours of Elegance Highland Tour, now complete with the arrival of the cars in Edinburgh this evening. More than 50 incredible pieces of automotive history dating from a 1903 Mercedes 60HP Simplex to a 2015 Ferrari La Ferrari took part in the tour, covering over 200 miles through Scotland, arriving the centre of Edinburgh on Thursday afternoon. A welcome party aboard the Royal Yacht Britannia officially opens the Concours of Elegance in Edinburgh tonight, and sees the inaugural Scottish Motoring Hall of Fame presented by His Royal Highness Prince Michael of Kent, the Association of Scottish Motoring Writers and Bridge of Weir Leather Company. The three-day Concours of Elegance itself opens in the grounds of the Palace of Holyroodhouse, Edinburgh on Friday 4 September following a parade down the […]

Land Rover has addressed the needs of a remote Scottish island in a move that could save lives. As part of its 70th anniversary year of activity, Land Rover sent a team of expert Experience drivers and volunteers to Mull in a fleet of Land Rovers to deliver unique three-word address plaques from what3words to 2,000 properties on the island, many of which are in isolated areas. What3words is a British technology company that has divided the globe into a grid of 57 trillion 3m x 3m squares, each with a unique, easy-to-remember three-word address searchable via an app that even works offline. Staff

I just happened upon this site that is shows off every car guy’s dream – finding that hidden gem stored away in a garage or barn. The site is Bring A Trailer. According to their site they put together Bring A Trailer to showcase the best of the US classic car marketplace to the enthusiast, investor, and racer. They’ve found that the prime ownership opportunities aren’t usually found in the glossy pages of the well known classic mags or at the fancy auctions, and are often sold far quicker than classifieds can get to print. A sample of the cars you will find on their front page? How about a V-6 Sunbeam Alpine, a TR4 vintage racer, a 1969 Bugeye Sprite, plus Alfas, BMWs and some great others. You can waste literally hours here. Staff