With more than 1,000 of the world’s finest historic competition cars racing on the famous Silverstone Grand Prix Circuit, no fewer than 10,000 iconic cars from yesteryear on display in the infield paddocks and in excess of 100,000 visitors lapping up the magical nostalgic atmosphere, the annual Silverstone Classic is firmly established as the ultimate celebration of classic cars.

In 2016, for the first time, the hugely popular three-day festival is offering an exciting new opportunity for an organisation to share in the success as the glittering event’s official charity partner.

“Silverstone Classic provides a fantastic platform for a charity looking to build its profile and carry out some creative fundraising activities at a world-class event,” said Nick Wigley, CEO of organiser Goose Live Events. “We’re excited to be introducing this new opportunity for a charity partner to align with Silverstone Classic; it’s a chance for us to give something back.”

This year’s summer festival takes place over the weekend of 29-31 July and applications are invited from charitable organisations – notably those with a relevance to the event – that wish to be considered as the Silverstone Classic’s official event charity. Interested parties should contact [email protected] for further information and application details. The deadline for applications is 5pm on Monday 22nd February. 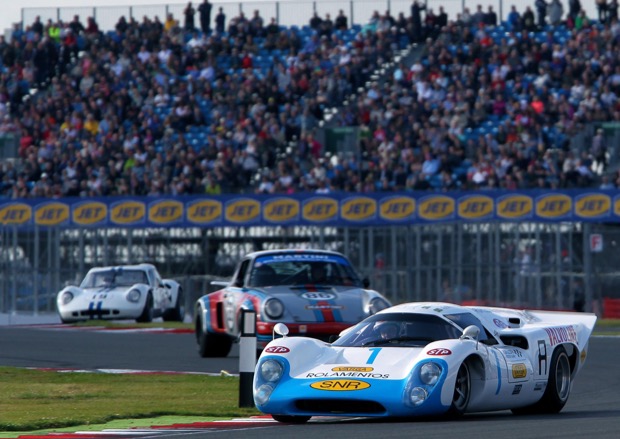 The Silverstone Classic – which in 2015 celebrated its 25th anniversary – is firmly established as the world’s biggest classic motor racing festival. The epic event attracts more than 1,100 race entries and drew a record crowd of more than 100,000 in 2015. The spectacular classic car celebration – winner of the prestigious ‘Motorsport Event of the Year Award’ as judged by the International Historic Motoring Awards in 2013 – is staged at the famous Silverstone circuit in Northamptonshire, birthplace of the FIA Formula One World Championship and home to the Formula 1 British Grand Prix.

The three-day festival features the very best of historic racing covering more than eight decades of motor sport, as well as live music from iconic rock bands (topped by Status Quo in 2015) and a wealth of family entertainment. This includes a free funfair, retail outlets, a host of interactive activities, a two-day classic car auction, air displays plus huge showcases of classic cars often celebrating important milestones in automotive history. In 2015, a record number of 120 car clubs displayed more than 10,000 classic cars.

The Silverstone Classic is promoted and organised by Goose Live Events Ltd. Goose manage international events for companies such as AstraZeneca, Bacardi, Bentley, Lamborghini and Unilever.

More to MGLive! than MGs

May 14, 2017 Staff Events, Highlights, MG Comments Off on More to MGLive! than MGs

The name above the gate may say MGLive! but there’s plenty more to see than just MGs models when the MG Car Club‘s annual extravaganza returns to Silverstone on 17th and 18th June. The Club’s Racing division has developed a racing programme not to be missed on the GP Circuit, as it’s own MG championships are joined by the pre-1966 Touring cars from the Masters Series, giving visitors the chance to see BMW 2002s, Alfa Romeos, Lotus Cortinas, Ford Falcons and Mustangs battling it out against the ever competitive Mini Coopers. Staff

AMOC Racing has launched a fresh new approach to the GT Challenge race series for GT cars running on slick tires, and aimed at ‘gentlemen drivers’. The GT Challenge is open to all GT cars old and new, the simple new format incorporates three classes; Class 1 for Aston Martin GT4 and N24, Class 2 for other marques running to FIA GT4 rules and Class 3 for any sports or saloon car of a type first built between 1995 and 2007 – providing performance is deemed appropriate. All cars will run on a control Dunlop slick tire thanks to support from HP Tyres who will support all rounds. The GT Challenge will consist of five rounds throughout the 2018 AMOC Racing season calendar, the 50-minute endurance races will feature a rolling start and incorporate a pit-stop to enable competitors to […]

Bentley Boys Back at Silverstone

Next summer’s Silverstone Classic will feature more than eight decades of glittering motorsport history, with confirmation that the acclaimed Kidston Trophy for Pre-War Sports Cars is returning to the packed on-track program in 2017. Staff