There are many types of books in an MG collection.

There are shop manuals, marque histories, racing stories, advertising records, and on and on. There are few however that standout is completely different. MG, Made In Abingdon: Echoes from the Shop Floor by Bob Frampton is one such book. This book is one of the few that while dealing with the MG factory, doesn’t actually have a ton of information about the cars. Instead, it is about the people and is told in their own words.

MG, Made In Abingdon will give you a feel for the people and the time and the place made famous by the sacred octagon. In the book, we hear from the true voices behind the cars. We hear stories that range from tea-girls bringing cinnamon buns to the line-workers to fist fights in bars to men going off to war. We also here, first hand, how the laborers viewed the factory and management. Of particular interestest in this aspect is the insight into the final days of the plant which occurred mere days after the anniversary celebration.

I was reading this book one evening as my wife was watching the BBC program Call the Midwife, and the resemblance between the two was remarkable. If you haven’t seen the show, you should – even if just for the cars. An MG Magnette sedan featured prominently, as do Morris, Rover, Austin and many others. This is a story of people and lives and relationships. Exactly the things that helped make MG followers so loyal.

In addition to the stories, the book is chocked full of period photographs. The images, many of which I have never seen anywhere before, cover everything from the early pre-war hand-assembled and the other marques built at the factory all the way up through the closing of the factory and beyond. There are even photos of some of the items MG produced during World War II such as tanks and wings for Tempest airplanes. 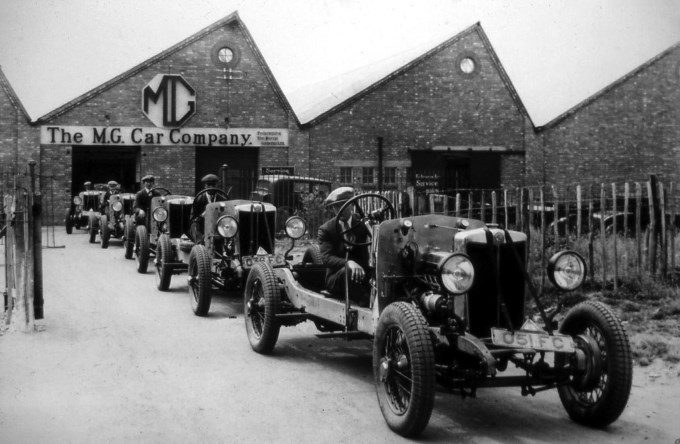 The author, Bob Frampton, left school at the age of 15 and pursued a short career in the army before returning to civilian life and completing a degree in History at Durham University. Completing a second degree in Law he taught in further education for the predominance of his working life. Upon retiring Bob became an active volunteer at Abingdon County Hall Museum, Oxfordshire, where his research has uncovered much of Abingdon’s unwritten history and has resulted in the unique collection of personal stories that appear in this book. He is well suited to author this book.

MG, Made In Abingdon: Echoes from the Shop Floor is a must-have for any MG enthusiast. It is not a large book, but it is full of anecdotes and history. I promise that it will win a favored spot in your library.

Editor at Just British
Michael Carnell is the editor and founder of the Just British Online Motoring Magazine. As a lifelong British car enthusiast, he has owned or driven British cars of all ages from Austins and MGs to Jaguars and Triumphs. He currently owns a 1966 Vanden Plas Princess 1100 and a 1977 MGB. But there is always room for more - no matter what his wife says.

MG Museum Up and Running

A museum dedicated to the MG car has reopened in Abingdon. The MG Museum opened on October 25 on the second floor of the County Hall Museum, in Market Place. The small museum, organized by former MG employee Brian Moylan, ran for a trial each weekend throughout last winter. However, it has now been given a permanent home – with the promise of more space to follow when the museum is revamped. Abingdon Works Centre, the local branch of the MG Car Club, donated £500 towards expanding the exhibition. Staff

Last Big Healey Ever Made to be Auctioned

March 21, 2017 Staff Auctions & Sales, Austin Healey, Highlights Comments Off on Last Big Healey Ever Made to be Auctioned

A 1967 Austin Healey 3000 MK III, the very last series production car that rolled off the line at the Abingdon factory, will be auctioned as part of CCA’s two-day mega sale at the Practical Classics Classic Car and Restoration Show on Sunday 2nd April. Chassis Number HBJ843025 was produced on the 21st December 1967 and first registered to the Donald Healey Motor Company in Warwick with the registration number OAC 656. Staff

Our video this week deals with the last production MGB made and its continued travels. On October 23rd, 1980 the very last MGB Roadster rolled off the production line at the MG Car Company in Abingdon. After a while, this final specimen ended up in The Heritage Motor Center alongside 300 other classic, vintage, and veteran British cars. In fact, The Heritage Motor Center in Gaydon is the world’s largest British sports car collection. However, recognizing the importance of MG’s to the people of Abingdon, the Center was kind enough to loan that last MGB to Abingdon County Hall Museum for an indefinite period of time. There was only one problem with the loan – the display area at the museum is on the second floor of a historic building with winding stairs and no good way to get a full-sized car, even […]