Available again after a long absence, Veloce Press is reprinting a number of classic automotive titles relating to MG, Jaguar, Rover, and Lea-Francis. All of the titles listed below are scheduled to be released on the 15th of this month and are available directly from the publisher, from Amazon, and many other sources.

This book is the definitive study of the MGA, for the author has gone back to factory records and to the people who worked on the car in the ‘fifties, to find out how it was conceived, manufactured and marketed. Here is the real story of the MGA’s engineering, body styling and every aspect of the car’s development and production – including MG’s strategy to beat its competitors.In seven years of production, there were major successes and sad disappointments. The MGA was the car that was “right first time” and though the Twin Cam variant was a nightmare for the factory, it is now the most sought after model. This book tells how the sleepy Thames-side village of Abingdon became a mass-production centre for the MGA, how the MGA became one of America’s best-loved sports cars and how the MGA has become one of today’s classic cars, cherished by enthusiastic owners all over the world.

The MGA by John Price Williams

The Lea-Francis company was founded in 1895, in Coventry in the UK, under the aegis of R.H. Lea. It originally built cycles and motorcycles, but, by the 1920s, was established as a manufacturer of high-quality sporting cars. From the 1high-quality1960s, Lea-Francis specialised in medium-sized cars, built with great care and the best quality components. Successful in motorsports, “Leaf” was an innovative company, but a lack of regard for good business principles led to fluctuating fortunes throughout the company’s long life.

In The Lea-Francis Story, Barrie Price draws on his lifelong association with Lea-Francis cars to tell the complete and fascinating story of the company.

The Lea-Francis Story by Barrie Price 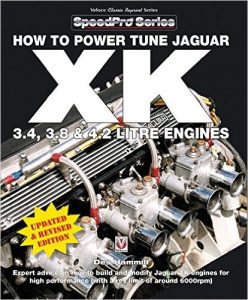 Nowadays affectionately known as the ‘Aunty’ Rover, the dignified P4 series of cars was launched in 1949 to carry Britain’s Rover company into the postwar era. Rover’s well-deserved reputation for building high quality cars, and the marque’s upmarket image, ensured that the P4 series appealed to the company’s traditional clientele – doctors, solicitors, bank managers and others of similar social rank.Despite the rather staid image of the P4 series, over the years the cars had many interesting features like the original ‘Cyclops’ central headlight, disc brakes, a freewheel device and overdrive. The larger-engined versions were also rather nifty and could whoosh their occupants along at a very unauntie-like pace!Production continued through several model variations – but always with four or six-cylinder engines – until 1964. In the meantime, Rover experimented with gas turbine power units in P4 bodies and created the famous JET 1. The Marauder sports car was also P4-based. An amazing number of the sturdy P4s have survived to the present day and most are now enjoyed and cherished by enthusiasts.

For our video of the week this time, we have an MG factory publicity video that comes to us via Pathé.  This film, Sports Car of the Year 1955-56, focuses on the newly introduced MGA. Starting with competition films from Le Mans, the Alpine Rally, and the Mille Miglia. The MGA, as most readers know, replaced the MG TF 1500 and represented a complete styling break from MG’s earlier sports cars – that styling having been developed for racing and records cars. Announced on September 26, 1955, the car was officially launched at the Frankfurt Motor Show. A total of 101,081 units were sold through the end of production in July 1962, the vast majority of which were exported. Only 5869 cars were sold on the home market, the lowest percentage of any British car. While now what one would call “impartial”, […]

In 1960, Colin Chapman sought to identify the most straightforward and uncomplicated way of building a Formula 1 car. The result was his first rear-engined design, the trendsetting Lotus 18. Lotus 18 – Colin Chapman’s U-turn by Mark Whitelock, the new book from Veloce Publishing, charts the 18’s competition history, from its inception, up to 1966 – via sensational victories over Ferrari at Monaco and the Nürburgring. Colin Chapman’s previous attempts at producing a Formula 1 car had been a complete disappointment. Despite being technically advanced, extreme lightness led to numerous structural failures. In 1960, Chapman decided to start with a clean sheet of paper, assessing the basic requirements for a contemporary Formula 1 car, and identifying how to achieve them in the most straightforward, uncomplicated way. The result was one of Chapman’s greatest creations – the Lotus 18 – a […]

Entries Invited for Le Mans Celebration Race to commemorate 1959 MG Car Club Entry he MG Car Club is inviting entries for a Le Mans Celebration race at Oulton Park on May 9th 2009. Entries are for cars of a type and in a form that were raced up to 1965 – including prewar. All cars should be to FIA spec and on road tyres or “L” sections. The Le Mans Celebration Race is by invitation but if you wish to receive an application call Steve Carr at the MG Car Club Office on 01235 555552. The race coincides with the publication of a book which records the MGCC North West Centres entries at Le Mans in 1959, 1960 1961. These were disguised Works entries after the MG Car company withdrew from Le Mans following the 1955 accident. The occasion […]