Getting behind the wheel of a Caterham or Lotus Seven is one of the most exhilarating experiences for any driver. The fourth edition of this well-respected 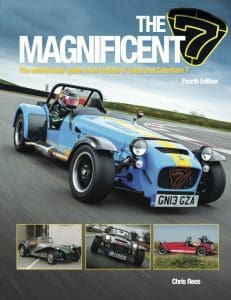 and informative book includes details of the models produced in the five years since the third edition was published, and gives a full model listing, specification and driving impressions for each of the Lotus and Caterham Sevens, together with a guide to purchase and restoration, a summary of the main developments, and useful contacts.

Further to the various versions of the Lotus-built Seven, there are more than 80 models produced under the Caterham marque. In 1973, the company then owned by Graham Nearn took over the manufacturing rights from Lotus and has carried on developing this back-to-basics sports car ever since.

Detailed coverage of each of the cars, from the original Lotus Seven S1 Ford through to the Caterham Super Sprint. A timeline of main developments chassis, engine, transmission, suspension. Caterham kits and race cars. Fully updated to include models such as the 160, 270, 310, 420, 480, 620R, AeroSeven, Sprint, Super Sprint, Harrods Edition and Donington Edition. Also detailed are Caterham projects such as the 21, SP/300.R, C120, Formula 1 and LEGO 620R.

The eagerly awaited Fourth Edition of ‘Magnificent 7: the Enthusiasts’ Guide to All Models of Lotus and Caterham Seven, from 1957 to the Present Day’ by Chris Rees is now on sale.

Few cars can claim to have been in continuous production for over 60 years but the Seven – conceived by Colin Chapman of Lotus in 1957 – is the purest sports car ever built and an unchanging constant in the sports car world.

Unchanging? Not quite. In 60 years, it has evolved so much that, in the current Caterham Seven range, not a single component remains from the original Lotus.

In this new book, author Chris Rees details the rich evolution of the Lotus and Caterham Seven from 1957 right up to the current day. Every single variant of the Seven has its own entry in the book, from the very first Ford side-valve Lotus of 1957 to the latest 2018 Caterham Supersprint.

Added to the new, updated Fourth Edition are details of every version of the Seven produced in the last five years since the third edition, including:

Each model listing has the in-depth inside story, plus specifications, production figures and identifying features, as well as driving impressions. Also in the book are essential guides to purchase, tuning and restoration; details of Caterham’s race cars and kit-form cars; a summary of the main engineering developments over the years (including chassis, engine, transmission and suspension); and useful contacts (including the factory, clubs, agents and independent specialists).

British sports-car outfit Caterham is launching both a new Seven race car with a forced-induction engine, and a one-make racing series in which the car can compete next year. The Caterham R600 racer offers 275 hp in the company’s familiar lightweight, stripped-out Seven chassis. The engine in question is a supercharged 2.0-liter Ford inline-four, rated for 275 hp and 200 lb-ft of torque. A six-speed sequential transmission sends power to the rear wheels by way of a limited-slip differential. The company claims the R600 will be much faster and “more aggressive” than existing Caterham models, but promises that “the linear power delivery of the supercharged engine makes it superbly drivable.” Make sure to check out the full story at Automobile Magazine. Staff

VotW – The Birth Of Lotus To The Caterham Seven 160

December 9, 2015 Staff Articles, Caterham, Classic Cars, Lotus, Video of the Week Comments Off on VotW – The Birth Of Lotus To The Caterham Seven 160

The Lotus Seven and its modern descendent, the Caterham Seven, are iconic motor cars on par with the Mini Cooper, Jaguar E-Type and MGB. Anyone who watched the short-lived 1960s show The Prisoner will no doubt remember the iconic opening sequence. What most people don’t know is that the Lotus is called the “Seven” for a good reason. Yes, there were actually a Lotus One through Six that led the way. The team at XCAR took one of those modern incarnations, a Seven 164 out for a drive, and then decided to tell the story of the Lotuses that came before the Seven. The video is  entertaining and well researched short film, full of interesting historical trivia. By the time its 12 minute run time is over you’ll be very well versed in the history of the Seven, and you’ll probably be […]